The first poster for Spencer, the upcoming biopic about Princess Diana starring Kristen Stewart, just dropped and you’ll want to hold on tight to that teacup before you see it

Kristen Stewart may still be giving fans the chills long after spooky season is over this year.

The "Twilight" alum, 31, is starring as Princess Diana of Wales in the upcoming biopic, "Spencer." Set for a Nov. 5 release date, the movie's plot is centered largely around Princess Diana's marriage to—and subsequent divorce from—Prince Charles. The two royals were married for 15 years before announcing their split in August 1996.

In the first poster, debuted on Wednesday, Aug. 25, Stewart is seen crouching in a weeping position while wearing an ivory embellished strapless ball gown. Even though we can't see her face, the image is striking for anyone who knows the private struggles and heartaches Diana endured during her time as Princess of Wales.

According to Deadline, the drama in the film unfolds over the course of three days, including one of her final Christmas holidays in the House of Windsor in England. 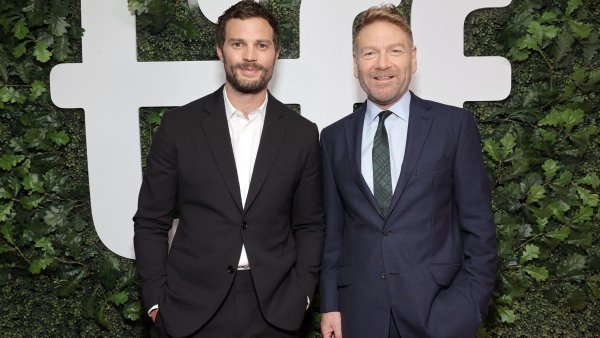 Emmys Vow a ‘Good Time' After Bleak Year; ‘The Crown' May Rule

"We all grew up, at least I did in my generation, reading and understanding what a fairy tale is," the movie's director, Pablo Larraín, told the outlet. "Usually, the prince comes and finds the princess, invites her to become his wife and eventually she becomes queen. That is the fairy tale."

"When someone decides not to be the queen, and says, I'd rather go and be myself, it's a big, big decision," he continued. "A fairy tale upside down. I've always been very surprised by that and thought it must have been very hard to do. That is the heart of the movie."

For everything we know about the anticipated film so far, including the actors who'll be playing Prince Charles, Sarah Ferguson and other members of the royal family, keep scrolling:

Kristen Stewart's casting as Princess Diana was announced in June 2020. At the time, director Pablo Larraín told Deadline that the actress was "one of the great actors around today." He added, "To do this well, you need something very important in film, which is mystery. Kristin can be many things, and she can be very mysterious and very fragile and ultimately very strong as well, which is what we need. The combination of those elements made me think of her."

"The way she responded to the script and how she is approaching the character, it's very beautiful to see," he continued. "I think she's going to do something stunning and intriguing at the same time. She is this force of nature."

The film is based on real-life events. Spencer, which is Diana's maiden name, takes place in December 1991, when she and Prince Charles spent a Christmas holiday with the royal family at one of Queen Elizabeth II's additional residences, in Sandringham, England. That weekend, she made the decision to leave her husband, following much relationship turmoil. The two ultimately divorced in August 1996 after 15 years of marriage.

"We decided to get into a story about identity, and around how a woman decides somehow, not to be the queen," Pablo Larraín told Deadline in June 2020. "She's a woman who, in the journey of the movie, decides and realizes that she wants to be the woman she was before she met Charles."

Spencer is set for release in fall 2021.

It was confirmed in March 2021 that Jack Farthing was cast as Prince Charles, Diana's husband. He is known for roles in the BBC drama series Poldark and the network's comedy Blandings. He also appeared with Olivia Munn in the Netflix movie Love, Wedding, Repeat.