Videos show a 280-pound man with autism crying while being consoled by an Orange County Sheriff’s deputy inside a group home in December 2019.

“He had a bad morning right? It’s ok. It’s ok,” the deputy can be heard saying on her body cam video.

The man in the video is Arnaldo Rios-Soto, who made worldwide news in 2016 after a North Miami Police officer shot his unarmed caregiver while he was lying on the ground with his hands up. The officer faced charges but was acquitted of the most serious counts. 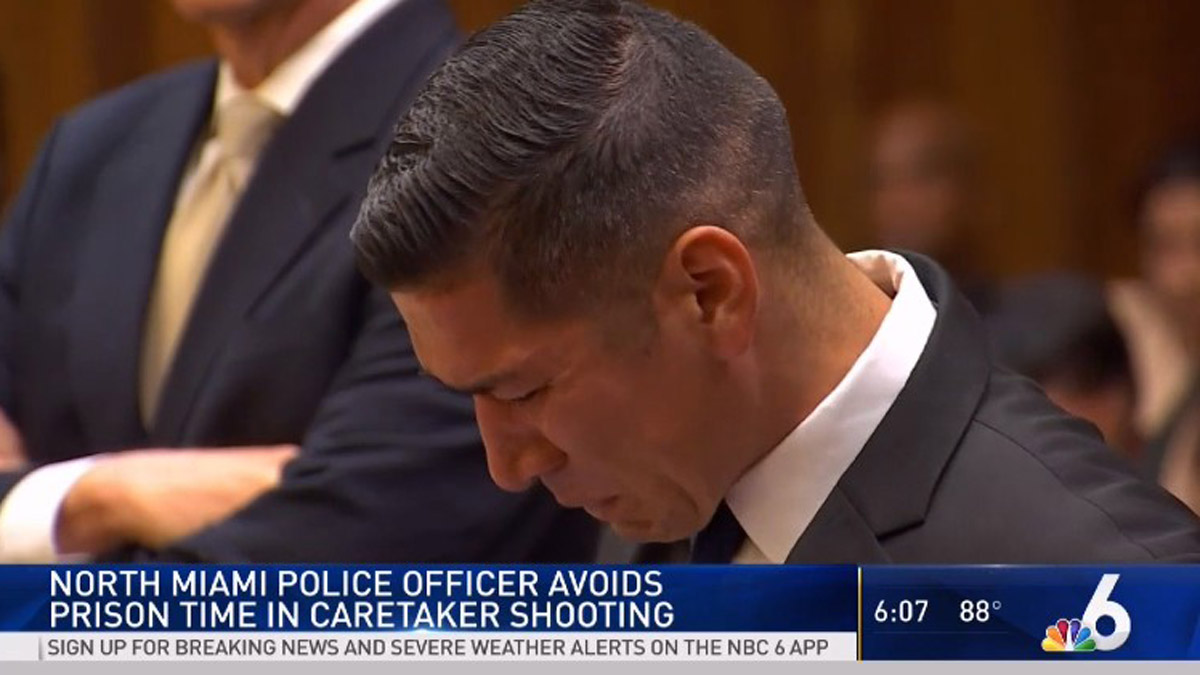 His family is now suing the group home where he had been living last year. They believe the facility made up a story to kick him out after losing thousands of dollars in state money for his care.

The NBC 6 Investigators obtained 911 calls made from Beechdale Group Home in Orange County on December 15 as well as surveillance and body camera videos from the same day. We matched the videos to see what was going when the calls were made.

The first call came in at 8:03 a.m. A worker from the facility tells the 911 operator, “Here at my workplace, there is the client here is very aggressive. Right now we can’t get — we’re not able to control him and I fear for my life.” That client is Arnaldo.

The worker went on to say, “Right now he is running through the house making holes.  Staff — we are trying to see if we can calm him down, but his behavior is too aggressive. We can’t get a hold of him.”

Surveillance video from inside the group home shows that less than 30 minutes after that call is made, Arnaldo can be seen hugging a worker and heading to his room. Two minutes later, another emergency call comes in.

“The client is getting more aggressive, punching more holes all in the wall. We do fear for his safety,” a worker tells the 911 operator.

At almost the same time police got that call, a worker can be seen on video exiting Arnaldo’s room but doesn’t appear to request help.

After 40 minutes passed, a third call is made to 911. The caller reports Arnaldo is trying to strangle a staff member. The video does show him scuffling with a worker.

Moments later, the workers can be seen putting a mat on the floor, placing Arnaldo down on it and holding him there for at least 15 minutes until the first deputy arrives.

By the time a second deputy arrives, the first one has Arnaldo sitting upright consoling him as he cries.

These are the latest difficult videos Arnaldo’s family had to see.

Arnaldo had lived in the group home for a year and a half. His family has filed a lawsuit alleging the group home made up the emergency calls to remove him from the home.

“The only reason he was deemed to be unmanageable at that group home was so that the group home could make more money,” said the family’s attorney, Matthew Dietz.

He says months earlier, the state had reduced the monthly payments for Arnaldo’s care from approximately $37,000 to $24,000 per month.

Dietz says after the decrease, the facility made an effort to legally evict him, which failed in court. Beechdale denies it wrongfully attempted to evict him.

“I am still baffled by the whole situation,” said Arnaldo’s sister, Miriam.

That December day, Arnaldo was taken to the hospital and never returned to the group home.

“I feel like it was not handled appropriately and it was a sign of negligence,” his sister said.

Greg Crook, the owner of the group home, sent us a statement: “This is turning into a very sad and unfortunate situation for their son. It is important to put this matter in context; this family would not or could not care for or assist in the caring for their son. Further, the family steadfastly and repeatedly refused to help with proper placement for their son’s care as they were legally required to do. Now, they are filing an unsubstantiated lawsuit seeking money damages for the discharge of their son and trying to rely on an unproven and largely unrelated administrative complaint as a backdrop. While we want to respect confidentiality in this matter, law enforcement had to be called and the decision to remove their son was made by them — not us. Beyond that, we have no further comment as this is now a pending legal matter.“

Arnaldo is now living at home with his family. They say they’re getting some assistance for him but he needs around-the-clock professional care.

“My brother is the victim in the middle of a whole situation and he deserved better,” Miriam said.

The Florida Agency for Persons with Disabilities investigated what happened in December and filed to strip the group home of its license. The process has been stalled because of the coronavirus pandemic.

The state alleged, in part, that in this incident and one other that they restrained him improperly and shouldn’t have called police without properly following a plan in place to deal with behavior problems.

In court documents, the Beechdale Group Home denied any wrongdoing and said the surveillance video doesn’t show everything that happened in the home on the day Arnaldo ended up leaving the facility.