When pediatrician Todd Wolynn started getting attacked on social media for touting the benefits of the HPV vaccine, he felt emboldened.

When his communications director, Chad Hermann, had to spend eight straight days removing disinformation from their practice’s social media pages, he felt angry.

And if you’re a vocal vaccine critic spreading lies online...you won’t like them when they’re angry.

“Here we are, trying to protect kids from cancer, and you're just getting attacked with straight out-and-out lies,” said Wolynn from his Kids Plus Pediatrics office in Pittsburgh.  “They'll talk about your kids. They'll talk about you...and at that point, you know, gloves off.  We're not taking this crap.” 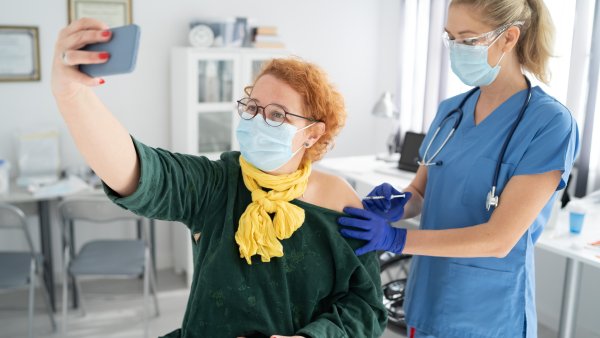 “They picked on the wrong group,” Hermann said.  “We decided to fight back.”

Less than four years after Wolynn and Hermann created Shots Heard Round the World, a nonprofit that mobilizes doctors online to protect vaccine information and vaccine advocates, they’ve now got more than 1,000 medical professionals organized under the The Public Good Projects umbrella, ready to bombard factual Facebook pages, TikTok videos, or Twitter posts that come under attack by anti-vaxxers.

“You attack us, we're going to want to fight back,” Hermann said.  “The best way to fight back is with evidence-based medicine and science and fact and truth and reality.”

Their work has taken on even more importance in the last year, as the COVID-19 pandemic has claimed hundreds of thousands of American lives;  vaccine disinformation could help the virus claim even more.

A new NBCLX/Morning Consult poll found America’s willingness to get vaccinated hasn’t improved in the last year, despite more than 525,000 COVID-19 deaths, and more than 125 million vaccine doses administered safely. And the number of Americans who say they have decided against the vaccine has increased.

Wolynn says medical providers simply don’t show up online as much as the few small groups that are hellbent on spreading disinformation.

“In 2021 and beyond, it's time for us to mobilize and get online and to engage families...because we want people to easily access us,” Wolynn said.

“The times that we feel like superheroes are out in the exam rooms, when we're taking care of kids,” Hermann said.  “Or on the computers, when worried moms or frazzled dads or uncertain grandparents message us or post to our Facebook page and ask us questions that we can answer.

“We have the ability to save lives.”

Noah Pransky is NBCLX’s National Political Editor.  He covers Washington and state politics for NBCLX, and his investigative work has been honored with national Murrow, Polk, duPont, and Cronkite awards. You can contact him confidentially at noah.pransky@nbcuni.com or on Facebook, Instagram, or Twitter.