The House select committee investigating the deadly Capitol invasion said Tuesday it issued subpoenas to the Proud Boys and the Oath Keepers, two far-right organizations whose members were involved with the Jan. 6 attack.

The latest batch of subpoenas follows dozens of other requests from the House committee for documents and testimony from witnesses believed to have tangible connections to Jan. 6 and the events that precipitated it. 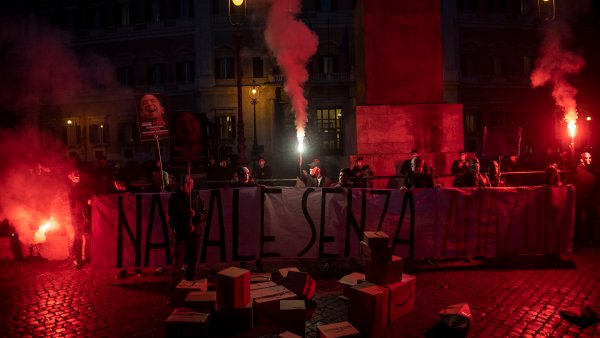 The bipartisan panel is probing the facts and factors that caused the riot, when hundreds of former President Donald Trump's supporters stormed the Capitol, temporarily halting efforts to confirm President Joe Biden's Electoral College victory. The invasion followed months of false claims from Trump that the 2020 election was rigged against him.

"We believe the individuals and organizations we subpoenaed today have relevant information about how violence erupted at the Capitol and the preparation leading up to this violent attack," select committee chairman Bennie Thompson, D-Miss., said in a press release.

Prosecutors have said in court papers that one Capitol riot defendant "discussed coordination with the Proud Boys and the number of Oath Keepers" who planned to be in Washington on Jan. 6.

One subpoena notes that an indictment in Washington federal court described a "conspiracy among at least 18 Oath Keepers in which members of the Oath Keepers planned to move together in coordination with regular communication to storm the United States Capitol."

That plot allegedly included plans to travel to Washington with "paramilitary gear and additional supplies including firearms, tactical vests with plates, helmets and radio equipment," the subpoena says.

Rhodes, according to press reports, was mentioned, but not by name, in that indictment, as having been in direct contact with several of the indicted Oath Keepers "before, during and shortly after the attack on the Capitol."

"In written and spoken remarks delivered prior to January 6, 2021, Mr. Rhodes repeatedly suggested that the Oath Keepers should, or were prepared to, engage in violence to ensure their preferred election outcome," the subpoena says.

On Monday, the select committee subpoenaed Roger Stone, the Republican political operative and Trump confidant, who reportedly used Oath Keepers members as personal security guards while in Washington on Jan. 5 and Jan. 6. Stone had reportedly said he was planning to "lead a march to the Capitol" from a rally near the White House where Trump spoke shortly before the riot began, according to the House committee.

Another subpoena announced Tuesday, this one directed to the Proud Boys, notes that to date, at least 34 people affiliated with the Proud Boys have been indicted by the Justice Department in connection with the riot.

Tarrio was barred by a judge from entering Washington after his Jan. 4 arrest on charges related to burning a "Black Lives Matter" banner stolen from a church in D.C. on Dec. 12, 2020.

The subpoena to 1st Amendment Praetorian and its chairman, Robert Patrick Lewis, noted that the group's Twitter account had suggested two days prior to the Capitol invasion that violence was imminent.

"There may be some young National Guard Captains facing some very, very tough choices in the next 48 hours. Pray with every fiber of your being that their choices are Wise, Just and Fearless," the account tweeted on Jan. 4.

On Jan. 6, Lewis tweeted, "Today is the day the true battles begin," the subpoena added.

The House investigation has sought the cooperation of dozens of witnesses and subpoenaed a growing list of Trump's current and former allies and associates.

The panel referred Steve Bannon, Trump's former senior White House advisor, for contempt of Congress for refusing to comply with its subpoena to him.

Bannon's attorney based his noncompliance on Trump's claims of executive privilege over the information requested by the panel. The full House later voted to hold Bannon in contempt, and a federal grand jury on Nov. 12 indicted him on two counts of contempt of Congress.

Bannon has pleaded not guilty. Trump has sued to block the committee from obtaining reams of records from when Trump was president.

The committee has also subpoenaed Trump's former chief of staff Mark Meadows, his former press secretary Kayleigh McEnany and Infowars host and conspiracy theorist Alex Jones, among many others.

The panel has threatened to advance criminal contempt proceedings for Meadows, who has refused to comply with his subpoena.

Jones was subpoenaed over his reported involvement in organizing the pre-riot rally outside the White House, among other connections to that day.

In a new video statement Tuesday, Jones called the House committee "a kangaroo court" and a "witch-hunt." He also said he expected to invoke his Fifth Amendment right against self-incrimination to avoid having to testify, "not because I've done anything wrong but because these people are political criminals who have an axe to grind."

But Jones also suggested he might testify if he can do so live on camera. "There's no way I'm going to go behind closed doors," he said.

Last week, Jones was held liable in a civil lawsuit for defamation that was filed by family members of victims in the Sandy Hook school massacre. Jones had claimed the event was a "hoax."

Stone was pardoned by Trump in December after being convicted for lying to Congress.