Among those implementing the face-covering orders is the city of Jacksonville, Florida, where the mask-averse Trump plans to accept the Republican nomination in August

Among those implementing the face-covering orders is the city of Jacksonville, Florida, where mask-averse President Donald Trump plans to accept the Republican nomination in August. Trump has refused to wear a mask during visits to states and businesses that require them.

Arizona Gov. Doug Ducey's order went into effect immediately and for at least 30 days. Ducey also ordered public schools to delay the start of classes until at least Aug. 17. Most Arizona bars and nightclubs opened after the governor's stay-at-home and business closure orders were allowed to expire in mid-May.

Arizona health officials reported 3,858 more confirmed coronavirus cases Sunday, the most reported in a single day in the state so far and the seventh time in the past 10 days that daily cases surpassed the 3,000 mark. Since the pandemic began, 74,500 cases and 1,588 deaths stemming from the virus have been reported in Arizona.

"Our expectation is that our numbers next week will be worse," Ducey said Monday.

The state is not alone in its reversal. Places such as Texas, Florida and California are backtracking, closing beaches and bars in some cases amid a resurgence of the virus.

In New Jersey, Gov. Phil Murphy announced Monday that he’s postponing the restarting of indoor dining because people have not been wearing face masks or complying with recommendations for social distancing. He also added that smoking, eating and drinking will be banned in Atlantic City's casinos when they reopen. New Jersey has been slowly reopening, and on Monday indoor shopping malls were cleared to start business again.

Democratic governors in Oregon and Kansas said Monday that they would require people to wear masks. Oregon Gov. Kate Brown’s order will require people to wear face coverings in indoor public spaces starting Wednesday. Kansas Gov. Laura Kelly said she will issue an executive order mandating the use of masks in stores and shops, restaurants, and in any situation where social distancing of 6 feet (2 meters) cannot be maintained, including outside. The order goes into effect Friday.

"The evidence could not be clearer: Wearing a mask is not only safe, but it is necessary to avoid another shutdown," Kelly said.

Idaho is moving in a different direction, at least when it comes to the elections. Despite the continuing spread of the virus, state elections officials said Monday that they would allow in-person voting — as well as mail-in ballots — for August primaries and the November general election, the Idaho Statesman reported. Idaho’s May 19 primary was the first statewide election held by mail only. The primary had record voter turnout.

Pharmaceutical giant Gilead says it plans to charge at least $2,300 for a single treatment course of Remdesivir, a drug shown to shorten recovery time for severely ill coronavirus patients.

In Texas, a group of bar owners sued on Monday to try to overturn Republican Gov. Greg Abbott’s order closing their businesses. They contend Abbott doesn’t have the authority, and they complained that other businesses, such as nail salons and tattoo studios, remain open.

"Gov. Abbott continues to act like a king," said Jared Woodfill, attorney for the bar owners. "Abbott is unilaterally destroying our economy and trampling on our constitutional rights."

But Democratic New York Gov. Andrew Cuomo said that Abbott is on the right path, and he added that Trump should order the wearing of masks.

One of Cuomo's Republican counterparts, Utah Gov. Gary Herbert, on a conference call with Vice President Mike Pence and members of the White House coronavirus task force, also asked Pence and Trump to issue a national call to wear masks. 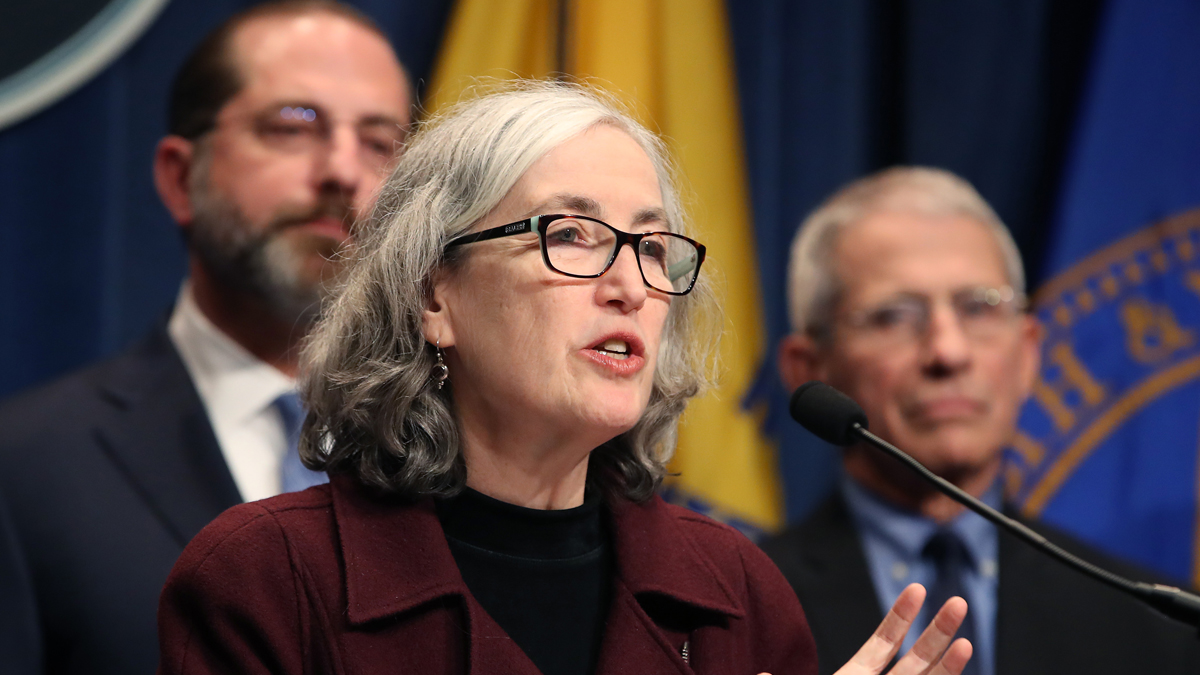 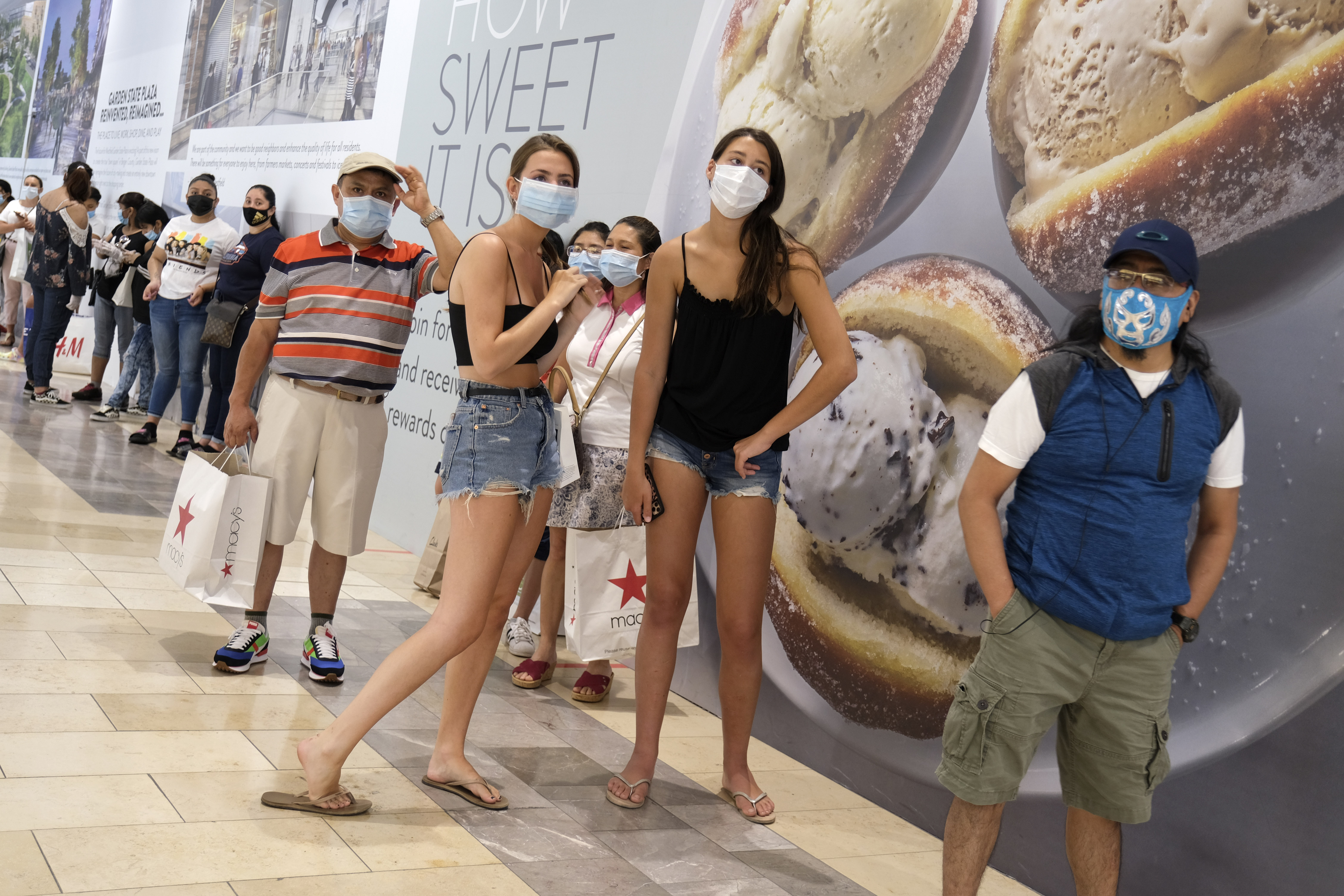 Republican Florida Gov. Ron DeSantis has opposed a statewide mask requirement but said in response to Jacksonville’s action that he will support local authorities who are doing what they think is appropriate.

In recent weeks, the Republicans moved some of the convention pageantry to Jacksonville after Democratic Gov. Roy Cooper of North Carolina objected to the holding of a large gathering in Charlotte without social-distancing measures.

Less than a week after Jacksonville Mayor Lenny Curry said there would be no mask requirement, city officials announced on Monday that coverings must be worn in "situations where individuals cannot socially distance."

White House spokeswoman Kayleigh McEnany responded by saying the president’s advice is to "do whatever your local jurisdiction requests of you."

Elsewhere around the world, Britain reimposed lockdown restrictions on the city of Leicester after a spike in cases, ordering the closing of schools along with stores that do not sell essential goods.

As more Americans return to work, pets used to work-from-home routines are facing a major adjustment.

The European Union is preparing a list of 15 countries whose citizens will be allowed to visit the bloc beginning Wednesday, Spain’s foreign minister, Arancha Gonzalez Laya, told the Cadena SER radio network. Because of the resurgence in the U.S., America may not be on that list.

"This is not an exercise to be nice or unfriendly to other countries. This is an exercise of self-responsibility," she said.

Associated Press reporters from around the world contributed to this report.