New infections and deaths have slowed considerably in Europe, where some countries started easing lockdowns a month ago

More than 130,000 autoworkers returned to factories across the U.S. for the first time in nearly two months Monday in one of the biggest steps yet to restart American industry, while an experimental vaccine against the coronavirus yielded encouraging results in a small and extremely early test.

At a Fiat Chrysler pickup truck assembly plant in Warren, outside Detroit, workers entered a giant white tent with a sign that read: “Let's restart and keep each other safe." Inside they had their temperatures checked and answered a set of questions on whether they had symptoms of COVID-19.

“I feel safer than being anywhere at any stores, because they got the screening and everything,” said Ann’alazia Moore, a janitor at the factory. “I feel like that’s amazing. That’s smart. I like that. So, I feel more safe. I won’t get sick.”

Detroit's Big Three — Fiat Chrysler, General Motors and Ford — as well as Honda and Toyota all had screening procedures in place at dozens of factories that reopened from the Great Lakes states south to Tennessee and Texas and out west at Tesla’s factory near the San Francisco Bay.

But no one was immediately cranking out vehicles, because it will take time to get the plants restarted.

Many workers were afraid of getting the virus but believed the automakers were trying to keep them safe.

“The parts of the plant where people would be closer together, they’ve put up a lot of partitions,” said Cole Stevenson, who installs steering wheels at a Ford pickup truck plant in Dearborn, Michigan. “You can tell they’ve taken tape measures to just about any surface two people would need to be near each other.”

Meanwhile, an experimental vaccine by Cambridge, Massachusetts-based Moderna Inc. triggered hoped-for immune responses in eight healthy, middle-aged volunteers. They were found to have antibodies similar to those seen in people who have recovered from COVID-19.

Further studies on the vaccine's safety, effectiveness and optimal dosage still need to be done. But stocks rallied on the news on Wall Street.

Worldwide, about a dozen vaccine candidates are in the first stages of testing or nearing it. Health officials have said that if all goes well, studies might wrap up by late this year or early 2021.

Despite warnings from health experts that the virus could make a resurgence, many states have eased their lockdowns under pressure from President Donald Trump to save businesses and livelihoods. About 36 million Americans have applied for unemployment benefits over the past two months, and U.S. unemployment surged in April to 14.7%, a level unseen since the Depression.

U.S. health authorities will be watching closely for a second wave of infections over the next few weeks and worry that Americans will disregard social distancing over the Memorial Day weekend, the unofficial start of summer. Over the past weekend, there were already signs of large crowds. Connecticut had to close beaches before noon when they reached capacity under new restrictions.

Elsewhere around the world, Europe pushed ahead with its reopening, allowing people into the Acropolis in Athens, high-fashion boutiques in Italy, museums in Belgium, golf courses in Ireland and beer gardens in Bavaria.

More than 4.7 million people worldwide have tested positive for the virus and over 315,000 deaths have been recorded, including about 90,000 in the U.S. and over 160,000 in Europe, according to a tally by Johns Hopkins University. Those figures are believed to understate the true dimensions of the outbreak because of limited testing, differences in counting the dead and concealment by some governments. 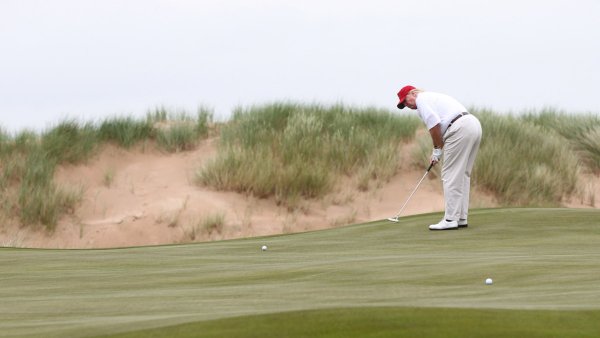 Trump Says Back to Normal in Golf Means Big Crowds, No Masks

In other developments, the World Health Organization bowed to calls from most of its member states to launch an independent investigation into how it responded to the coronavirus. Trump has repeatedly attacked both WHO and China, claiming the U.N. agency helped Beijing conceal the extent of the outbreak in its early stages.

WHO Director-General Tedros Adhanom Ghebreyesus said the probe will take place “at the earliest appropriate moment." The announcement, made at WHO's annual meeting, came after a watchdog body found possible shortcomings in the agency’s warning system and its role in providing travel advice to countries.

It’s been another long week, so let’s all take a moment to relax, take a deep breath and watch this artist make incredible Zen gardens.

Chinese President Xi Jinping defended China’s record, saying the country provided all relevant outbreak data to WHO and other countries, including the virus’s genetic sequence, “in a most timely fashion.” He also announced that China will give $2 billion to the global fight against the virus.

A 70-year-old man was released from the hospital after battling coronavirus for 34 days. As he left the hospital he got a heartwarming hug from his five-year-old grandson.

But the Trump administration stepped up its attacks at the meeting, with U.S. Health and Human Services Secretary Alex Azar accusing WHO of failing to obtain the information the world needed as the outbreak emerged.

Without mentioning China by name, Azar said: “In an apparent attempt to conceal this outbreak, at least one member state made a mockery of their transparency obligations, with tremendous costs for the entire world.”

He said the United States has allocated $9 billion for the global coronavirus response.

With new infections and deaths slowing considerably in Europe, many countries are preparing to reopen their borders and trying to draw up rules for a highly unusual summer tourist season.

“This vacation this year won’t be like the ones we know from the past,” German Foreign Minister Heiko Maas told ZDF television. “The pandemic is still there, and we must at least have safety precautions for the worst case that the figures get worse again.”

Greece reopened some of its ancient sites, along with high schools, shopping malls and mainland travel. Paving stickers were used to keep visitors apart. Tourists were local, for the country still has a 14-day quarantine for arrivals, and travel to Greek islands remains broadly restricted.

Churches in Italy and at the Vatican resumed public Masses. Guards in hazmat suits took the temperatures of the faithful entering St. Peter’s Basilica, where Pope Francis celebrated an early morning Mass in a side chapel to commemorate the 100th anniversary of the birth of St. John Paul II.

Police in Sydney are looking for a man who broke into the Australian Museum in Sydney. CCTV shows the man walking around the museum taking photos with dinosaur bones.

Across town, the Rev. Jose Maria Galvan snapped on latex gloves and a face mask before distributing Communion to a dozen parishioners at his Sant’Eugenio parish.

“Before I became a priest I was a surgeon, so for me gloves are normal,” he joked.

Turkey's president announced a four-day curfew during the Muslim holiday of Eid al-Fitr. The country has opted to impose short weekend and holiday curfews, instead of full lockdowns, fearing damage to the already troubled economy.

In France, authorities were concerned after about 70 infections popped up in the country’s schools since they started reopening last week. France reopened about 40,000 preschools and primary schools last week, with classes capped at 15 students.