They worry they will be disqualified from relief payments, even if they paid taxes, because someone in the family is undocumented

Gladys works as a housekeeper in New Jersey, her husband as a maintenance man, but they are mostly sidelined during the pandemic and their income has been slashed. Yet the family might not qualify for federal relief because of the way the $2 trillion relief bill was written by Congress.

She came to the United States 23 years ago with her daughter, but only recently became a permanent resident. Although she has been paying taxes, her immigration status could make her entire family ineligible for the payments, even her husband, who is an American citizen.

“I told him they are punishing him because he married me,” she said. 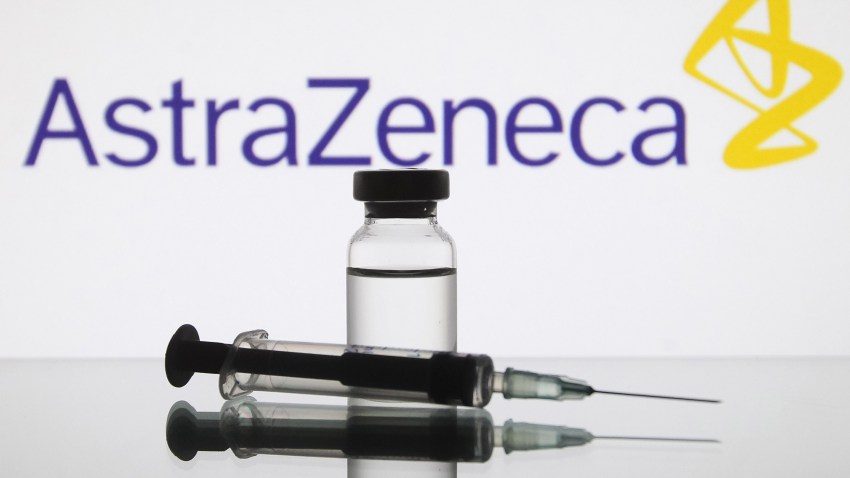 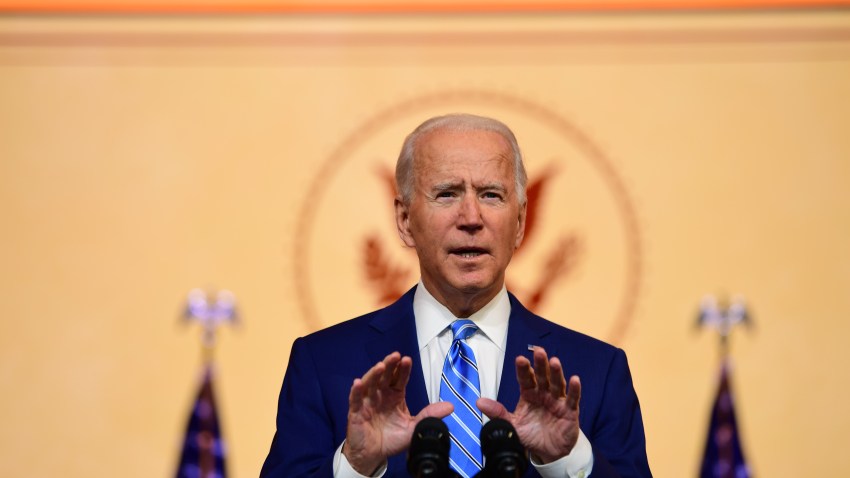 Biden in Thanksgiving Address: ‘We're All in This Together'

More than 825,000 Americans had tested positive for the coronavirus as of April 22 and more than 45,000 had died, a toll that has been striking Latinos and African Americans disproportionately hard.

As far as deaths, Latinos accounted for 15 percent and African Americans 28 percent, according to American Public Media Research Lab but with data from only 32 states plus the District of Columbia.

Public health officials, in explaining the differences, point to discrimination, poverty and related problems: chronic illnesses, crowded housing, fears of being deported that keeps undocumented immigrants from doctors and hospitals and risky front-line jobs that are suddenly key in a pandemic, among them cleaning staffs, mass transit workers, delivery men and women and grocery cashiers.

Many Latinos, like Gladys, are facing an extra obstacle surviving the stay-at-home orders in effect in many states. The Coronavirus Aid, Relief and Economic Security or CARES Act excludes not only immigrants who file taxes with an individual taxpayer identification number, issued by the Internal Revenue Service to those not eligible for a Social Security number, but also to their American spouses if they file jointly. The Migration Policy Institute estimates that there are 1.3 million undocumented immigrants married to American citizens.

Although as a permanent resident, Gladys now has a Social Security number, she most recently filed her taxes with an individual tax identification number. She and her husband had not yet calculated what they owed for 2019 when the federal relief money began to be distributed, and Gladys is afraid that they have already been disqualified from receiving a payment, which can be based on either year’s filing.

“For many, many years I was paying taxes,” she said.

Michael Zona, a spokesman for Republican Sen. Chuck Grassley of Iowa and for the Senate Finance Committee of which Grassley is chairman, said the Social Security requirement was based on standards used for the earned income tax credit, the child tax credit, and the individual tax rebates that were part of the 2008 economic stimulus.

“(It) prevents illegal immigrants from qualifying for a U.S. taxpayer-funded program and helps reduce fraud and abuse,” he said in a statement.

House Democrats, among them Reps. Grace Meng of New York, Rep. J. Luis Correa of California and Raul Grijalva of Arizona had hoped to allow payments to those using individual tax identification numbers but were unsuccessful.

“They too have bills to pay and loved ones to support,” Meng said in a statement. “And many immigrants fortunate to still have a job are among the essential employees who are risking their health and safety by working on the frontlines during this outbreak.”

“After all, the coronavirus does not distinguish immigration status – neither should our federal response,” she said.

She and others are trying to include all immigrants and their families in subsequent relief bills.

New York’s Gov. Andrew Cuomo has declined to provide emergency cash to undocumented immigrants from the state, saying New York faces a potential $15 billion budget shortfall as a result of the coronavirus pandemic. California, however, is making undocumented immigrants eligible for $125 million in disaster relief assistance that Gov. Gavin Newsom announced on April 15.

“During this moment of national crisis, undocumented immigrants are risking their own health on behalf of the rest of us, saving lives as health care workers; caring for our loved ones; and growing much of the food we depend on,” said Laurene Powell Jobs, the founder and president of Emerson Collective, which is among the foundations providing money for the fund.

Gladys, who is 52, is cleaning only one house now, though four of her dozen clients are continuing to pay her. But they are all over 50 and have put her work on hold.

Not only is her husband an American citizen but her daughter, who lives with them, is a Dreamer, a undocumented immigrant brought to the country as a child and eligible to work under a program for young people like her.

Now 24, her daughter graduated from Montclair State University with a degree in child advocacy and development — for which Gladys paid — and was working at a private school in New Jersey. She has now applied for unemployment.

In a tweet through the organization “Faith in New Jersey,” Gladys wrote: “#IAmEssential

Also in New Jersey, Francisco packs online orders of speciality foods, his sister is a cashier at a Shoprite, and because their mother is unemployed, both are working harder than ever through the coronavirus pandemic to make sure they can pay their rent.

The 26-year-old has been in the United States since he was 4 years old, his 18-year-old and 15-year-old sisters are citizens but because their mother is an undocumented immigrant, he worried they would ineligible for the federal payments.

“We’re sacrificing our health to make sure Americans are fed,” he said. “I don’t think it's fair that we’re treated not as equals. We’re putting our lives on the line to put food on people’s tables, to make sure people’s fridges are full.”

“They work day to day, they don’t get paid time off, paid vacation,” Francisco said of many of the workers.

He is busier than ever packing shipments of food made up of Belgian waffles, fine chocolates and energy snacks, though with fewer people working at one time. Typically he handles 20 to 30 orders a day, but that number has jumped to 80 to 90 a day. Meanwhile, he is in college full-time studying industrial design, with all of his classes now online.

He said that he felt lucky to have the job but he is stressed, too. With his mother unable to work as a housekeeper for now, he and his younger sister are responsible for meeting the household expenses and he worries especially about his sister, who interacts with people throughout the day, raising her danger.

“My sister & I are helping The U.S. to keep its engine running,” he tweeted with the hashtag “#IamEssential.” My mom is out of work, my sister & I are working twice as hard to make sure rent gets paid. It’s scary because we are exposed but we have no other choice. We are taking huge hit financially and it’s not fair.”

Francisco was born in Colombia and as a Dreamer, he has been able to work legally. But his mother, who is undocumented, paid her taxes through an individual taxpayer identification number. In the end, though his mother did not get a payment, Francisco and one of his sisters, who had filed separately, did.

Grants meant to help students pay for unexpected costs during the pandemic are being denied Dreamers like Francisco. All undocumented students are prohibited from receiving emergency college grants that are part of the $2 trillion coronavirus aid package approved by Congress. Education Secretary Betsy DeVos issued the restriction in guidelines on how colleges should distribute more than $6 billion in grants but university leaders are objecting, saying it was not specified by Congress.

The coronavirus pandemic has not only exposed the differences between who is healthy in this country and who is not — a divide often driven by poverty, racism and a lack of access to health care — but also has dramatized the way in which everyone’s health is connected, said Dr. Sandro Galea, the dean of Boston University’s School of Public Health and co-chairman of Massachusetts’ Emergency Task Force on Coronavirus and Equity. COVID-19 has been such a disaster for the United States because the country underinvested in public health and had no capacity for an organized, centrally coordinated response from federal, state and local governments, said Galea, who has a new book co-written with Dr. Michael Stein called “Pained: Uncomfortable Conversations about the Public’s Health.”

“We were sitting ducks for the disease to spread,” he said.

High blood pressure, diabetes, heart disease and other conditions — all of which could increase the risk of covid-19 -- disproportionately affect minority communities, he said.

“Unless you think you can put yourself in bubble wrap and totally isolate yourself from the rest of the population, you are going to be at greater risk if somebody around you is at greater risk,” he said.

On weekends, members of an organization that assists undocumented immigrants in New Jersey are out helping day laborers to stay safe even while they still gather on corners. Karol Ruiz, the co-founder of Wind of the Spirit in Morristown, and other volunteers bring soap, face masks and information about social distancing. They explain new requirements intended to stop the spread of the virus and new protections such as moratoriums on evictions. Many of the men are part of the recent wave of migrations from Guatemala, El Salvador and Honduras, have left their families behind and are homeless or sleeping in cramped rooms. Some until recently had been working in restaurants that have closed and they believe they have no choice but to try to find jobs, said one of the volunteers, Kevin Escobar.

“They’re desperate,” he said. “Many of them were living day-to-day prior to this pandemic and now they are their only means to be able to support themselves and in many cases their families back home.”

For them, working during a pandemic is a "life and death struggle to be able to earn a living," he said.

The IRS estimates that undocumented immigrants pay more than $9 billion in withheld payroll taxes each year. In 2010, $12 billion more was collected from Social Security payroll taxes of undocumented workers than was paid out in benefits, according to the Bipartisan Policy Center.

“Many times we’re asking factory workers, construction workers, domestic workers who may be undocumented to continue doing their work because they’ve been designated as essential,” said Brian Lozano, Ruiz’s husband and Wind of the Spirit's lead organizer. “And these individuals at the same time in some cases for many decades have been paying taxes into a system that they can’t basically get anything from because they’re undocumented."

Gladys said she knew that there were people much worse off than she. Her family’s expenses are covered for April though she is not sure about May. But she has heard of families with children, who do not have money for food or rent.

“It is heartbreaking,” she said. “It is horrible. Thank God we are not in that position yet and I hope we don’t get there. It’s really, really, really bad.”