Former NFL wide receiver Antonio Brown turned himself in to police one day after authorities issued a warrant for his arrest on battery and burglary charges, his attorney Eric Schwartzreich said Thursday night.

Brown, 31, spent the night at the Broward County jail, his lawyer said. He appeared in court wearing a protective vest Friday morning, where Judge Corey Amanda Cawthon set his bond at $110,000. He'll have to wear a GPS monitor, surrender his passport, and can't use social media or possess any weapons, Cawthon said.

"He is not guilty of these charges. He did not commit a felony battery and what happened in this case, when all the facts come out, you’re gonna see that he will be vindicated," Schwartzreich said.

Antonio Brown appeared in bond court Friday morning in Broward County after the former NFL star turned himself in to police.

During the hearing, prosecutors said Hollywood Police have been called to Brown's house 18 times since December.

Police responded to Brown's Hollywood, Florida, home on Tuesday, where they arrested his trainer, Glen Holt, on a battery charge, officials said.

Officers were able to take Holt into custody, but were unsuccessful in making contact with Brown.

Holt, 35, was charged with one count of burglary with battery. He was booked into jail before posting the $20,000 bond Wednesday.

The alleged victim, the driver of a tractor-trailer moving truck, was seen leaving the scene. The Miami Herald reported, citing an officer's arrest report, that it began as an argument over Brown's refusal to pay $4,000 to the driver to release his household goods. The driver called police and reported a vandalism after he said Brown threw a rock as he drove away, causing a small dent and chipping the paint, an officer wrote.

The driver later returned when the manager of his company told him that Brown would now pay the $4,000, and an additional $860 for the damage and the driver’s time. Brown then paid the $4,000, but refused to pay the rest, so the driver returned to the van to call his company, and that's when Brown “started another verbal argument,” police said.

“Brown stepped up into the cabin of the vehicle and started to physically grab and pull (the driver),” while Holt “entered the vehicle and grabbed the keys from the ignition,” police said. The driver tried to get the keys back and cut his hand in the process, according to the report.

Police say the driver suffered injuries including scratches on his neck, shoulder and arm, a cut on his finger and a scrape on his stomach.

Holt then used the keys to open the truck, while Brown “and other unidentified friends” began removing boxes. The boxes, however, belonged to another client, police said. When the driver told them so, Brown and the others "started tossing the items back into the truck causing damage to some of the property,” an officer wrote.

Hollywood police were called again, and when officers arrived, Brown “retreated inside of his residence and shut the door.”

Hollywood police announced earlier this month that their athletic league had severed ties with Brown after a series of tense confrontations at his home.

Officers had responded to Brown's home on Jan. 13 after officials said he was involved in a domestic dispute with his girlfriend regarding ownership of a Bentley. During the incident, Brown was "very rude and disrespectful" and used "degrading language" in front of his young children, police said in a statement. 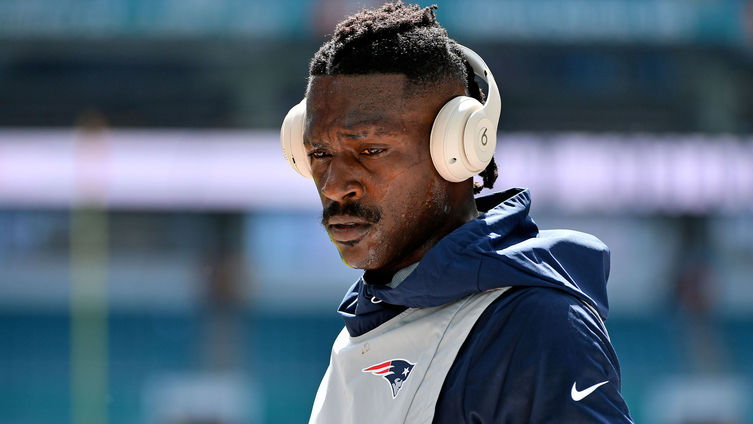 In another incident back on Dec. 14, officers responded to Brown's home after his girlfriend called police to help her remove her belongings from his home after an argument the night before, an incident report said. Police said when officers approached the front door of Brown's home to explain the situation, he became argumentative and treated officers with "disrespect and disdain."

In a statement, the department said Brown was removed from its athletic league after a long relationship between the two.

"This type of behavior and communication with Officers is completely opposite of what we teach and instill in the youth of our community in the way of respect for parents, teachers, elders and all those in positions of authority. We began to reach out to Mr. Brown to have a conversation with him. We were unsuccessful in that effort," Hollywood Police said in a statement.

The department said they returned a check that was donated to the athletic league by Brown.

Brown, who is a free agent, played nine seasons with the Pittsburgh Steelers. He was traded to the Oakland Raiders last year but released before ever playing a regular season game following several off-the-field incidents. He was then signed by the New England Patriots, who released Brown in September after a second woman in 10 days accused him of sexual misconduct.