A baby girl is dead and two others in her family were taken to the hospital after the child's mother attacked them in northwest Miami-Dade, police said.

“Once they went into the house and they were able to find the 15-month old, she was in serious condition, suffering from injuries," said Miami-Dade Police Det. Alvaro Zabaleta. "She was transported via ground to Jackson North, where unfortunately she succumbed to her injuries.”

The two other victims — who police say is the suspect's daughter and husband — were flown to Jackson Memorial Hospital for treatment, but the extent of their injuries was not immediately known. 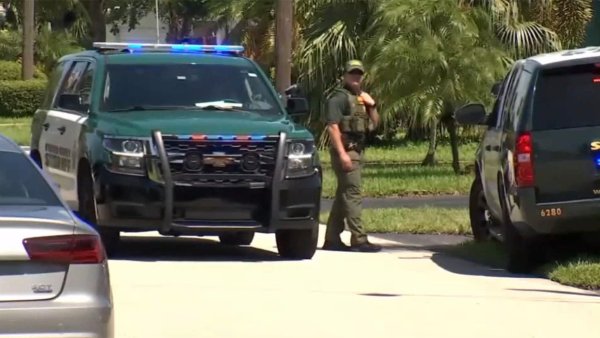 Officers took the woman, 38, into custody as she was leaving the home. Police have not released her identity or filed any charges. She was also treated at the hospital after apparently harming herself.

A neighbor gave NBC 6 doorbell surveillance video that shows who she says is the mother carrying her baby girl at her doorstep. There is no clear audio in the video.

"Said she had a vision from God, and he said that anybody that took the COVID shot would not go to heaven and please don't take it," Thelma Sloan said. "And I said, 'honey, I'm sorry, I've already taken it,' and she said I had a lot of praying to do."

Sloan also described the woman as "an excellent mother" who loved her children.

“I’m sure as I stand here, she would never in her right mind have hurt her children," she said.

Four other children inside the home were found safe and are now with relatives as an investigation continues.