Yusimi Ferreira is one of many mothers in Havana who have joined the recent protests in Cuba started by the San Isidro movement -- a group of musicians, filmmakers and other young artists who demand freedom of speech and thought.

Ferreira, whose 15-year-old daughter suffers from cerebral palsy, was arrested Saturday after she arrived at the site of the protest and began transmitting live on her cellphone. She was released six hours later.

“I am simply fighting for my daughter’s wellbeing. She is the way she is because of medical malpractice," Ferreira said. "I can’t count on my country for anything.  Anytime I file a complaint...nothing." 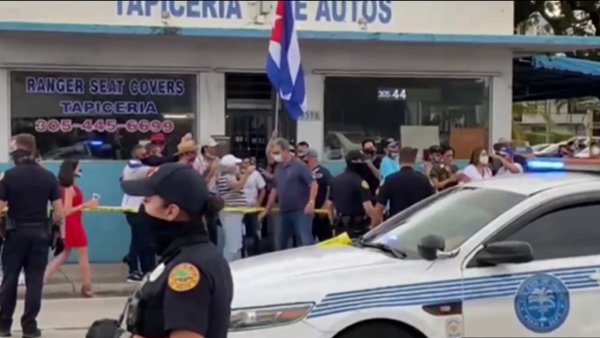 In a video she posted on social media, she said she had not eaten in five days because she had no money to purchase gas for the stove. The financial situation for people in Cuba has become even more dire since the onset of the pandemic.

Another mother, Kety Mendez, whose daughter has autism, says her family lack basic supplies. She says she has no diapers for her daughter and struggles to afford food.

Mendez and her husband are outspoken about the frustrations regarding the Cuban regime. She says that is why he is passed over for jobs. He is a fisherman who has been unemployed for months. However, Mendez says the retaliation for speaking out against the totalitarian government could be  worse.

“We moms are being harassed by the police, by the dictatorship. They have jailed many of us. Some aren’t allowed to leave their homes. Some are being raped,” Mendez said.

The Cuban mothers joined the protests, which broke out Friday after a group of 14 San Isidro members were separated while they were on a hunger strike. They were on the strike in order to bring awareness to the imprisonment of rapper Denis Solis. He and other rappers have been openly critical of the Cuban regime in their music.

Leaders of the dictatorship have labeled San Isidro movement members and all dissidents, terrorists linked to the U.S. And a recent post on president Miguel Diaz-Canel’s official Twitter account says, “Cuba will not tolerate any interference with its internal affairs neither from the United States nor from anyone else.” Diaz-Canel has also called the San Isidro movement, which began in 2018, a farce.