Those seeking to apply for unemployment benefits in South Florida during the ongoing coronavirus pandemic got a new way to get that sought after application without even leaving their car.

A paper application drive-thru opened Tuesday in Miami-Dade County at Gibson Park, located at 401 Northwest 12th Street, until 12 p.m. The applications will be available in English, Spanish and Creole.

Light crowds began lining up early in the morning, something officials attribute to other locations - such as libraries throughout the county - handing out applications.

"This has been a struggle from day one," Commissioner Xavier Suarez said. "I would say about two weeks ago people started applying on the internet."

The paper applications have became valued in recent weeks during the pandemic after Florida’s Department of Economic Opportunity has encouraged people to apply by paper after various problems with the state’s website. 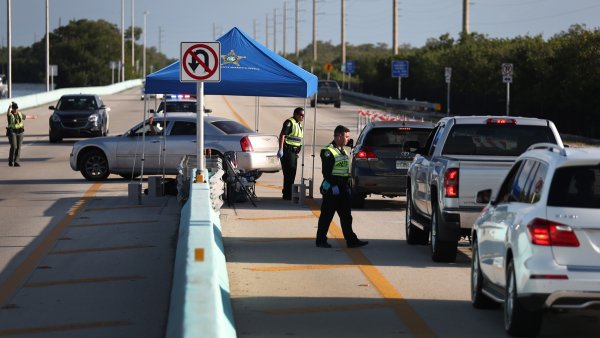 Man Charged With Driving Through Florida Keys Checkpoint During Pandemic

In recent weeks, the website has been flooded with new cases of people applying. The problems have led to long delays and error messages for Floridians attempting to apply for the first time.

“I tried to call in online, but then it told me I had to call this number because of my PIN, I tried a few other things, to try to reset it, but they just said the only thing I can do is call the number,” said Jacob Dizorney, one of the thousands of people in the state who has found themselves out of work during the pandemic.

Thousands of people lined up at locations across the county last week, some wearing masks at locations in Hialeah but many violating standards about social distancing out of desperation to start the process of applying for benefits.

DEO production statistics for the week of March 28th show close to 90 percent of the people who called ran into issues. Of the more than 864,000 calls the agency handled that week, data shows roughly 73,000 were self -service and only 8.900 were handled by agents as 781,000 were either blocked or abandoned.

Florida Gov. Ron DeSantis announced the hiring of extra staffing last week as the department plans to spend close to $110 million in extra contracts for help.

County officials will be on hand to give the applications out as well as pre-stamped envelopes to send them to the state’s offices in Tallahassee.