Some lawmakers are calling for new crash tests of a controversial guardrail after claiming the tests were “flawed.”

Weeks after a series of crash tests were completed on the controversial Trinity’s ET-Plus guardrail-end terminals that line Florida’s roadways, a document filed in federal court in Texas claims the guardrails used in the testing process could have different dimensions than the ones that line the nation’s roadways.

Coon provided a sworn affidavit alleging “the testing at Southwest Research Institute was performed on ET-Plus-end terminals that have different dimensions than what Trinity claimed in its sworn testimony that it manufactured and sold for installation on our nation’s roadways,” according to the document filed in court on Feb. 18. Some experts said the dimensions could affect how the guardrails perform during a wreck.

In response to the document, a Trinity spokesperson sent an email to NBC 6 accusing the plaintiff of “deliberately mixing apples and oranges” and saying that the “…dimensions … in the tests are reflective of the products which have been in service.”

Guests Evacuated After Boat at Disney World Takes on Water

The Federal Highway Administration has yet toreveal the final results from the series of eight crash tests conducted on the guardrails.

However Senator Richard Blumental, D-Conn., said he was shocked when he watched the last car in the series of crash tests hit the railing and the damage that was left behind.

“It’s deeply troubling because of the spectacular impact and damage that was done,” Blumental said.

Blumental and Senator Chuck Schumer, D-N.Y. wrote three letters to the head of the Federal Highway Administration expressing their “grave” concerns about what they called “flaws” in the testing process.

“These tests are in fact a sham,” said Sen. Blumental.

In an e-mail, a spokesperson for Trinity said: “Until all the data is completely analyzed, it is pure speculation to declare a test failed or passed.”

In 2005, Trinity made some small cost-saving changes to a model called ET-Plus and reduced the dimensions of the end of the guardrail from five inches to four. As a result, some claim the altered guardrail system is more likely to turn into a spear that can pierce into a car on impact instead of peeling back away from like a ribbon, as intended.

Trinity failed to inform the federal government about the change back in 2005, even though it was required.

Joshua Harman is the plaintiff on the civil case.

“People are dying, across this nation, people are dying losing legs and limbs,” said Harman, who spoke to NBC 6 Investigators by satellite from Tennessee. “We really need to come clean with this and do it transparently.”

From Texas to Florida, more than a dozen lawsuits have been filed against Trinity from family members who claim their loved ones were injured or killed by the altered guardrails.

NBC 6 Investigators discovered there are 1,678 of the four-inch guardrail models in Florida. 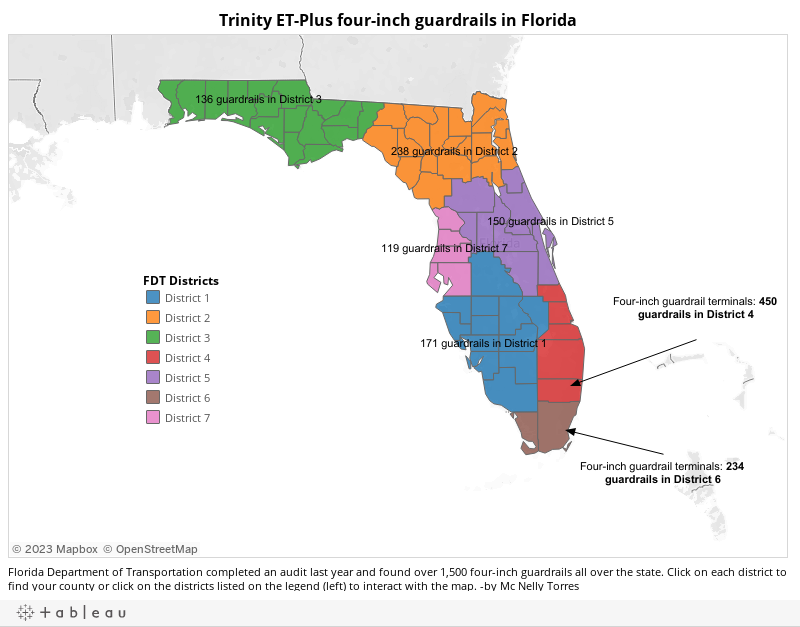 Click here for a detailed explanation of the guardrails found in this map.

“Many of these guardrails should be replaced in order to protect the safety of drivers,” Blumenthal said.

As for the testing conducted in San Antonio, Texas: the government didn’t take any guardrails from the road. Instead, they tested newer ones from a warehouse in California. They also used old standards for testing from 2005 and not newer, stricter testing guidelines established in 2011.

“Not only are we dealing with a potentially defective guardrail, but a lack of rigorous and reliable testing and non-disclosure,” Blumenthal said.

Results for the last test, which has Senator Blumenthal worried, have not been released.

“These tests are unreliable,” the Connecticut senator said. “They lack the rigor and standards and they’ve also been done with these guardrails that were changed from the original model.”