A third person was arrested on the night Miami Beach police officers beat two men in a hotel lobby, and that person, along with another bystander, is now threatening legal action, NBC 6 has learned.

27-year-old Sharif Cobb was arrested on July 26 at the Royal Palm Hotel while recording the officers with his cellphone. Charges against him have been dropped.

He was the second bystander who was detained while filming the police.

As the investigation of those Miami Beach police officers charged in the rough arrest of two tourists in South Beach gets underway, we are getting a closer look at the videos released by the state attorney's office. NBC 6's Cristian Benavides reports

“Mr. Cobb was charged with resisting an officer, which he wasn’t doing — he was just taking video,” said attorney David Frankel.

A close-out memo obtained by NBC 6 shows Cobb was also initially charged with violating a Miami Beach ordinance that prohibits civilians from being within 20 feet of an officer "engaged in lawful duty" after being given a warning.

In the memo, the State Attorney’s Office wrote Cobb was "complying with the officer's commands."

Adding, "There is insufficient evidence to prove that he had the intent to impede their investigation, harass or provoke the officers. For those reasons, the case should be dismissed." 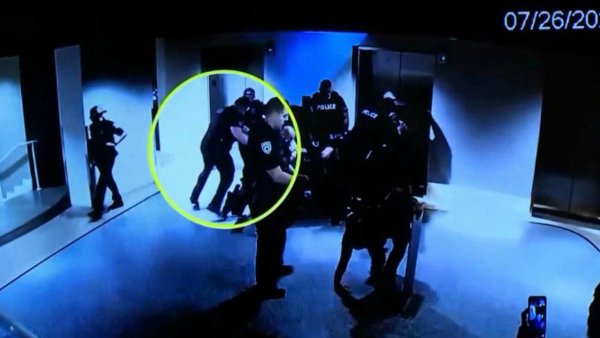 “We’ll be putting the city on notice that we intend to bring a claim for constitutional violations,” Frankel said.

Frankel is representing both 28-year-old Khalid Vaughn and Cobb.

Vaughn was the bystander struck by officers multiple times after being tackled to the ground while recording officers on his cellphone.

The two are friends from New York who were in town for the Rolling Loud music festival.

They plan on taking legal action against the city and the police department.

“I can’t tell you damages but people like this really trust the police and it’s difficult to have this happen and affect them emotionally,” Frankel said.

The State Attorney's office says the incident started with the legitimate arrest of 24-year-old Dalonta Crudup.

Officials say Crudup ran from police after allegedly striking an officer with his scooter. But even after he was put in handcuffs, Crudup was kicked by officers.

“What surprised them the most was they wanted to document something they thought was not right,” Frankel said of his clients.

Five officers have been charged with misdemeanor battery, but the charges could be upgraded.

More officers could also be charged pending the outcome of the investigation by the State Attorney’s Office.