The list of charges against Dale Daniel Spidle continues to grow in the wake of a rampage that left two adults and an infant dead, several people injured, a trail of damaged vehicles, and ended with a naked confrontation with police in Broward County.

It began May 20 with the random beating death of Spidle's neighbor, 61-year-old Elizabeth Carmona, with a ball peen hammer in Coral Springs. Her 10-month-old nephew Mateo died of his injuries in the hospital, according to the arrest report.

Spidle, 35, is also accused of fatally shooting a man – whose name has not been released – after a crash in Pompano Beach.

Charges of failing to remain at the scene of an accident with injuries were added against Spidle on Friday.

He was already charged with three counts of first-degree murder, premeditated murder, robbery, aggravated battery, burglary, leaving the scene of a crash involving damage, reckless driving and resisting an officer, according to Broward County court records.

Spidle - who stood in a striped jail uniform with his right forearm in a cast - was silent at Friday’s court appearance for the additional charges that brought the total to 14, so far.

He remains in the Broward County Jail without bond.

According to investigators from Coral Springs and Coconut Creek police and the Broward Sheriff’s Office, Spidle was fleeing the double-murder scene in a silver Kia.

We are learning more about the woman and baby who were killed allegedly at the hands of a man who went on a bizarre crime spree throughout Broward County. NBC 6's Cristian Benavides reports

The Kia crashed into several cars including a white Ford utility truck. The truck driver was shot and he died in the hospital later. At least three other injured motorists were also treated at Broward Health North medical center.

Spidle drove off in the utility truck, plowing through traffic stopped at an intersection in the 4200 block of West Sample Road in Pompano Beach, sending another motorist to the hospital.

The truck kept speeding west along Sample Road until it jumped a sidewalk, cut through a row of bushes and struck two more cars parked at a Walgreens in Coconut Creek. 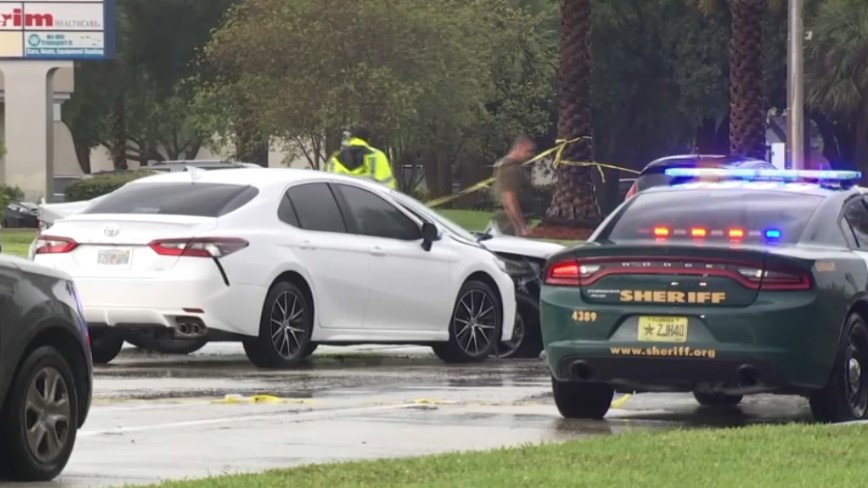 A woman waiting in the drive-thru lane of the pharmacy was then attacked through the window of her car and had her necklace stolen.

Spidle took off his clothes, ran into a Shell gas station, grabbed a beer bottle, came outside and dared arriving police to shoot him.

Officers twice fired stun guns at the naked and bloody Spidle with no effect. So, he was grabbed and handcuffed during a struggle.

The investigation is ongoing and more charges are possible.