The City of Miami Beach's special commission meeting Sunday was a portrait of pandemic life, with everyone alone in their home or office, plugged into the meeting virtually.

The problem they were discussing was just the opposite. For the last three days, South Beach's entertainment district has been flooded with crowds, sometimes resulting in violence and property damage.

Officials voted to extend an 8 p.m. curfew and nightly shutdown of the three major causeways that allow access to the island, measures that were announced Saturday afternoon and went into effect hours later. In addition:

City workers and commissioners had plenty to say about residents' and businesses' concerns Sunday as they discussed the adjustments.

"We didn't really know what to expect from spring break," City Manager Raul Aguila said. "But these are not necessarily spring breakers (in the sense that) they're not kids coming down for a break from college."

Both Aguila and Mayor Dan Gelber repeated that the tourists flooding South Beach this year include people who are seeking a respite from coronavirus regulations and cold weather elsewhere.

"There's a huge number of people coming," Gelber said. "And a small number of them are coming here because they want to let loose, or worse. And we can't allow ourselves (not to act) and have to do this meeting after a horrific incident."

Kim Wynne is live from Miami Beach, where tourists have been flooding the streets over recent weeks.

"It has felt at times that our city isn't safe," Gelber continued. He noted that there are plenty of people who appropriately enjoy Miami Beach during the mornings and afternoon.

But in the evenings, "it becomes a party place, and it becomes very hard to manage," Gelber said. He pointed to an incident in which someone had fired a gun, leading a massive crowd of panicked people to run through the streets.

"That's a situation no police force can control. The moment you have that scenario, you need to have this kind of meeting."

Aguila said that between February 3 and March 21, there have been more than 1,000 arrests in the city, with more than 350 of those for felony offenses, as well as over 80 seized firearms.

Businesses have been struggling with property damage, safety threats to staff and unpaid tabs

Businesses have been tremendously affected by shutdowns throughout the pandemic. But Aguila said he was surprised that in this case, some restaurants and shops had voluntarily closed out of concern for the safety of their staff.

"My decision (to institute a curfew and state of emergency) was supported in a way I'd never seen before," Aguila said. "Places have decided not to open because they were afraid not only of property damage, but also of the well being and safety of their patrons." 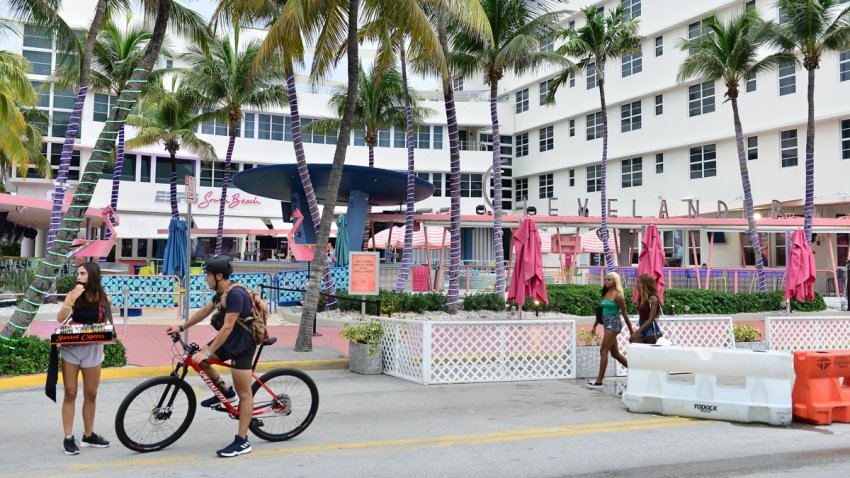 On Friday, Miami Beach's The Clevelander made headlines with its decision to shut down food and bottle service for five days after a fight had broken out at the venue on Thursday.

The bar was also reportedly struggling with patrons leaving without paying their tabs. Much of the chaos had been defined to a very limited area within the Art-Deco Cultural District.

Aguila said most of the incidents had been concentrated to the area between 5th and 6th street, and between Pennsylvania Avenue and Ocean Drive.

The traffic heading into Miami Beach was a nightmare on Saturday, and police have a new plan for Sunday

Residents were reportedly furious that it was taking upwards of four hours to get back into the City of Miami Beach Saturday night.

"My residents are really, really upset," Miami Beach Commissioner Steven Meiner said. "A family I spoke to who was flying back into the city had to switch their flight to avoid getting stuck in five hours worth of traffic very late at night."

Meiner also complained about reports that police were not checking for proof of residence or employment, and merely slowing traffic down to one lane while still letting anyone get in.

Miami Beach Police Chief Richard Clements responded that deputies had been given "about four hours of notice" regarding the closures, so it hadn't been a plan officials were satisfied with.

"The plan of (shutting down) Julia Tuttle didn't work," Assistant Chief Paul Acosta said. "Any time you shut down a major roadway in a major city in America, you're going to have tie-ups."

Acosta said that starting Sunday night, police would be opening up a designated resident-only lane so that those who live in the city can get home quickly.

Commissioner Meiner mentioned it was a pity the city hadn't created a car sticker or plaque system to help police identify resident vehicles in situations like this.