Acevedo, who took office in April after leaving his post as Houston police chief, did not testify at the meeting.

Miami city commissioners unanimously voted Thursday to fire Police Chief Art Acevedo after a short and stormy tenure in which he clashed with city officials and members of his own police force.

The five commissioners took the step following a trial-like hearing in which he was criticized for offending fellow Cuban-Americans and losing the trust of his officers, while his attorney argued that the city’s politicians wanted him gone because he accused them of corruption.

“I lament the fact that I will not be able to continue serving here," Acevedo told reporters after the vote. "I’d like to reiterate that there are many quality men and women in this department. I want them to know that I admire them and will continue to support them and fight for them."

Acevedo, who took office in April after leaving his post as Houston police chief, did not testify at the meeting. At the time of Acevedo's hiring, Miami's mayor hailed the veteran police official as the Michael Jordan and Tom Brady of police chiefs. 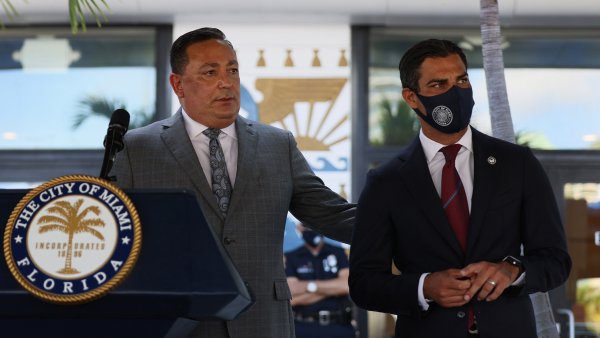 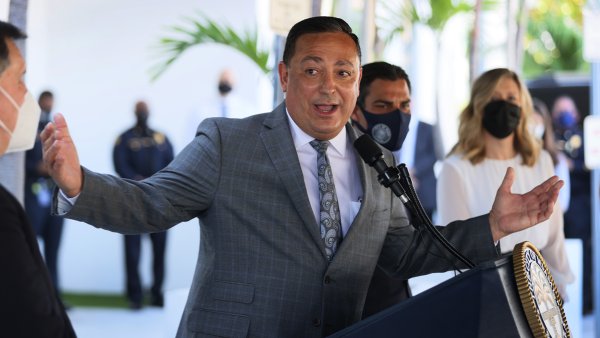 "The relationship between the Chief and the organization has become untenable and needed to be resolved promptly,” Noriega said. “Chief Acevedo is not the right fit for this organization.”

Acevedo’s attorney John Byrne said at Thursday's meeting that there was not enough time to build a case to properly defend Acevedo with the meeting scheduled four days after he was suspended by Noriega.

Not long after the meeting began, Acevedo's attorney, John Byrne, informed commissioners he would not be calling any witnesses, saying Acevedo feels like the outcome of the meeting has already been decided.

Byrne added that he had requested the meeting be held on Monday but was denied. Commissioners said they were bound by the city charter to start and finish the meeting within five days of notice to Acevedo.

Miami's city commissioners are meeting Thursday to discuss the ouster of Police Chief Art Acevedo, who has been suspended and faces termination after just six months into the job. NBC 6's Steve Litz reports

The city manager cited specific reasons, including Acevedo's alleged failure to report personal and or vacation time, using offensive language against somebody at a public protest, and the action plan that he recently turned in regarding the department's future that had been deemed deficient by Noriega.

Acevedo was recruited by Miami Mayor Francis Suarez, who earlier this year hailed him as “America’s best chief.” He was seen as a progressive law enforcer who headed the police department in Houston, and shares ancestry with hundreds of thousands Cubans in Miami as a Havana-born refugee.

On Tuesday, Suarez stood by the city manager’s decision to remove Acevedo, saying the clashes had become a distraction.

“The status quo where a top city administrator is at war with the city’s elected leadership is simply untenable and unsustainble,” Suarez said at a news conference. “Unfortunately, not every hire works to your satisfaction."

Acevedo began making waves almost immediately after he was sworn in in April by taking over internal affairs and making significant changes to his command staff. He demoted four majors and fired two high-level police officials — a married couple — because they weren’t truthful about a crash involving a city-issued SUV.

At two raucous meetings over the past month, commissioners attacked Acevedo and his leadership, appointing themselves to an investigative committee with subpoena power to examine his appointment.

In an eight-page memo sent by Acevedo to the city manager and mayor before those meetings, Acevedo stated that Commissioner Joe Carollo and the other commissioners were interfering with internal affairs investigations, and improperly ordering police resources to be deployed against certain establishments “based on nothing more than the whims of commissioners.” He also accused the commissioners of hampering his reform mandate by eliminating positions.

Carollo and the other two Cuban American commissioners said they were deeply offended when reports emerged last month that Acevedo talked to officers about a “Cuban mafia” that runs the city. Acevedo later apologized, saying he didn’t know that was a term former Cuban leader Fidel Castro used to refer to exiles.

“He must be the only individual of Cuban background in the world who doesn’t know that,” Carollo said. “You are not in the middle of the Amazon.”

Among other things, the commissioners alleged that Acevedo has been hypocritical for firing officers for some of the things he is accused of doing.

Carollo, the most vocal politician opposing Acevedo’s leadership, scrutinized an older photo where the police chief was seen using a “white power” hand gesture similar to the OK hand sign, saying a Miami officer was relieved of duty by Acevedo after being accused of using the same gesture.

As Miami Police Chief Art Acevedo is on his way out over controversial statements among other fights with city elected officials, City Manager Art Noriega announced that Assistant Police Chief Manny Morales will step in as Interim Chief. NBC 6's Constance Jones reports.

Carollo and another commissioner are also scrutinizing damage seen on Acevedo’s SUV, which they claim was not properly reported. They say that was similar to the incident that led to Acevedo’s firing of the husband and wife police officers.

Assistant Police Chief Manny Morales will take over as interim chief while the city searches for a permanent replacement.

"I have been talking with residents and I will tell you that people are very frustrated, they are disappointed at the government and I think that that’s wrong because that is what makes people not go out and vote and participate in the government," Regalado said.