The sentencing trial for the man who killed 17 people and wounded 17 others in the Parkland high school shooting more than four years ago began Monday with opening statements from the lead prosecutor and emotional testimony from some of the teachers and students who witnessed the shooting.

Jurors are deciding whether Nikolas Cruz will be sentenced to death or get life in prison for the Feb. 14, 2018 shooting at Marjory Stoneman Douglas High School that left 14 students and three staff members dead.

Cruz, now 23, pleaded guilty in October to those murders and 17 counts of attempted murder, so the jurors will only decide his punishment. They must be unanimous for Cruz to get the death penalty — if at least one votes for life, that will be Cruz's sentence. 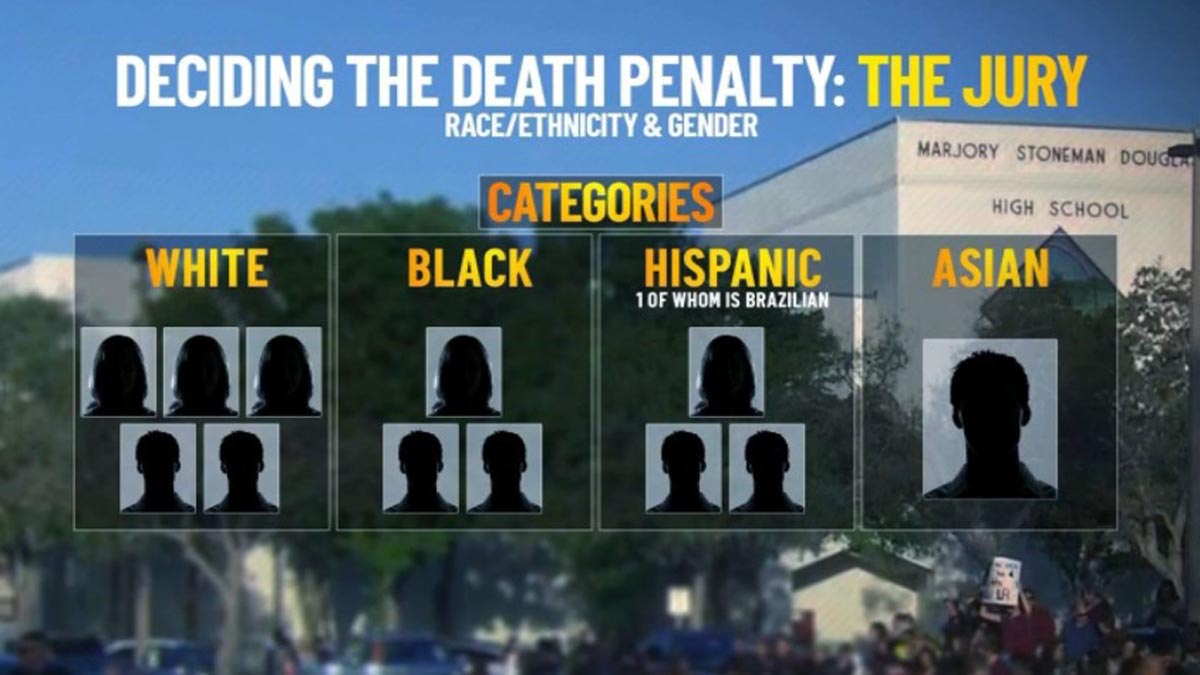 Lead prosecutor Mike Satz highlighted the shooter's brutality as he stalked a three-story classroom building and fired his AR-15 semi-automatic rifle down hallways and into classrooms. The shooter sometimes walked back to wounded victims and killed them with a second volley of shots.

“I am going to speak to you about the unspeakable," Satz said. "Goal-directed, systematic murder, mass murder of 14 children, an athletic director, a teacher and a coach."

The prosecutor described the shooter as "cold, calculated, manipulative and deadly,” citing a video the gunman made three days before the massacre.

About 50 family members of the victims were in the courtroom, some couples holding hands. Some parents teared up as Satz described the deaths of their children. One mother, crying, got up and left. Others sat stoically, their arms folded across their chests.

It wasn’t clear if anyone was present to support the gunman, who sat at the defense table between his attorneys. He mostly looked down at a pad of paper with a pencil in his hand, but he did not appear to write. He would sometimes look up to stare at Satz or the jury, peer at the audience or whisper to his lawyers.

After Satz spoke, the shooter's lawyers announced that they will not give their opening statement until it is time to present their case weeks from now. That is a rare and risky strategy because it gives Satz the only say before jurors examine grisly evidence and hear testimony from survivors and the victims' parents and spouses.

Satz's first witness was Brittany Sinitch, a former MSD student who returned to the school as a teacher after college in 2017.

“It was like you could feel [the gunfire] within your body, like, all throughout your chest,” she said.

Her 911 call from school during the incident was played in court, with gunshots drowning out the sound of her voice.

“They couldn’t hear me over the sound of the gunshots,” Sinitch said. “It was so incredibly loud.”

NBC 6's Julia Bagg has more on an emotional first day in the courtroom for those deciding the fate of the shooter.

Also among the first witnesses was Danielle Gilbert, a junior who was in psychology class when the shooting began. The teacher told students to get behind her desk.

“We were sitting like sitting ducks. We had no way to protect ourselves,” said Gilbert, who is now a student at the University of Central Florida. Four people were shot in that room, she said, including one who died.

The sentencing is expected to last around four months. It took nearly three months to select the seven men and five women plus 10 alternates who will decide the gunman's fate. The process began with some 1,800 candidates.

The jurors currently on the main panel are two banking executives and two technology workers, a probation officer, a human resources professional and a Walmart store stock supervisor. Also included are a librarian, a medical claims adjuster, a legal assistant, a customs officer and a retired insurance executive. The defense used a late peremptory challenge as alternates were being chosen to remove a retired health care executive who had originally been seated on the main panel.

The selection process was upended several times. One day, the sheriff’s deputies who guard the courtroom thought some potential jurors were about to attack Cruz and pulled him to safety as they quickly removed the threatening panelists.

Families of those killed in the massacre are having to relive the horror of the shooting that killed 17, as NBC 6's Ari Odzer reports.

On another day, Circuit Judge Elizabeth Scherer, who's presiding over the case, had to dismiss a group of potential jurors because one wore a T-shirt referencing the shooting that supported the victims and survivors. Selection also was delayed for two weeks when lead defense attorney Melisa McNeill contracted COVID-19.

The panel will have a task never faced by a U.S. jury — no American mass shooter who killed at least 17 people has ever made it to trial. Nine others died during or immediately after their shooting attacks, killed either by police or themselves. The suspect in the 2019 slaying of 23 at a Walmart store in El Paso, Texas, is awaiting trial.

The jurors will be exposed to graphic evidence, including crime scene and autopsy photos and tour the three-story classroom building where the gunman methodically stalked the halls, shooting at anyone in front of him and into classrooms. It has not been cleaned since the shooting and remains bloodstained and bullet-pocked, with Valentine's Day gifts strewn about.

In the end, jurors will have to decide whether the aggravating factors such as the shooter’s multiple victims, his planning, the terror he created and the cruelty he showed outweigh such mitigating circumstances as his long history of mental and emotional problems, his possible sexual abuse and the death of his parents.

"Finally,” said Lori Alhadeff, who wants the killer executed for murdering her 14-year-old daughter Alyssa. “I hope for swift action to hold him responsible.”

All victim parents and family members who have spoken publicly have said directly or indirectly they want the gunman sentenced to death.