Thousands of people took to the streets in Cuba on July 11, 2021, in massive protests against the Communist Party government

Leaders from South Florida and throughout the state are marking the one-year anniversary of the unprecedented anti-government protests that swept through Cuba.

Thousands of people took to the streets in Cuba on July 11, 2021, in massive protests against the Communist Party government.

On Monday morning outside City Hall in Coconut Grove, local leaders raised the Cuban flag in honor of those demonstrators and gathered to send a message across the Florida Straits and to Washington. A Year After Protests, Cuba Struggles to Emerge From Crisis 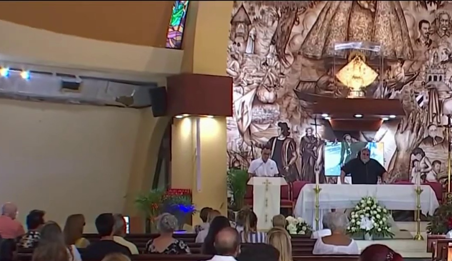 Cuban Exiles in Miami Mark One Year Since Historic Protests

“We’ve had enough, and we’re frankly calling upon not only Cubans in the island to continue their heroic struggle, but frankly, the president of United States and this country that has the means and the power and the ability to have a coherent policy to help those who are suffering in countries like Cuba, Nicaragua, Venezuela," Miami Mayor Francis Suarez said.

According to one Cuba watch group, about 1,000 people remain behind bars for participating in last year's protest.

Miami Commissioner Joe Carollo was asked whether he thought the July 11th movement lost steam over the past year.

“Well, I don’t think the movement has lost steam. I think Ukraine, rightly so, has taken a lot more of the attention of the world, but it hasn’t lost steam here," Carollo said.

The national prosecutor's office said in June that courts had imposed 488 sentences on protesters, ranging up to 25 years in prison.

"Sooner or later, hopefully sooner, that regime will also change and you will have freedom and democracy in Cuba," Carollo said.

Miami-Dade Mayor Daniella Levine Cava tweeted her support for the Cuban people on the one-year anniversary.

"A year after historic protests, Miami-Dade stands fully united with the Cuban people on the island and across our community fighting for freedom, dignity, and basic human rights," she said. "May their courageous actions continue to move us closer to the dream of libertad y dignidad in Cuba."

"One year ago, the Cuban dictatorship’s worst nightmare became a reality,” Rubio said in a statement. “The citizens of the island it holds hostage peacefully united in repudiation of their failed Marxist policies. With the hymn of ‘Patria y Vida,’ afro-Cuban artists ignited a movement that inspired everyday Cubans of all ages to stand up in condemnation of decades of repression, censorship, indoctrination, and human rights abuses. We have a moral duty to support the more than 1,000 civilians, many of whom are underaged, who remain arbitrarily detained because of their protest against tyranny."

On Sunday, a prayer vigil was held in Miami to mark the occasion, and more local demonstrations were expected Monday.