Restaurants, Gyms Shutting Down Again While Beaches Reopen in Miami-Dade During COVID Spike

Restaurants may continue to operate for takeout and delivery services

Miami-Dade Mayor Carlos Gimenez announced another round of shutdowns and additional public health measures Monday as Florida's coronavirus count continued to rise at an alarming rate.

Restaurants, ballrooms, banquet facilities, party venues, gyms, fitness centers, and short-term rentals in Miami-Dade are all being ordered to shut down as of Wednesday, July 8th.

Restaurants may continue to operate for takeout and delivery services only. Gimenez later added that outdoor dining will still be allowed, "with restrictions that include tables of no more than four patrons, appropriate distancing, and music played at a level that does not require shouting to prevent the emission of potentially dangerous airborne droplets."

Office buildings, retail stores and grooming services will remain open for the time being, Gimenez said in a press release. He cited an uptick in hospitalizations and a "spike in the percent of positive COVID-19 tests" as his major concerns.

"We want to ensure that our hospitals continue to have the staffing necessary to save lives," the mayor said.

Beaches in the county will reopen on Tuesday following Fourth of July closures, but Gimenez added that "if we see crowding and people not following the public health rules, I will be forced to close the beaches again."

Outdoor activities, including condominium and hotel pools, summer camps and child daycare centers are also allowed to remain open as long as they abide by strict social distancing and mask rules. 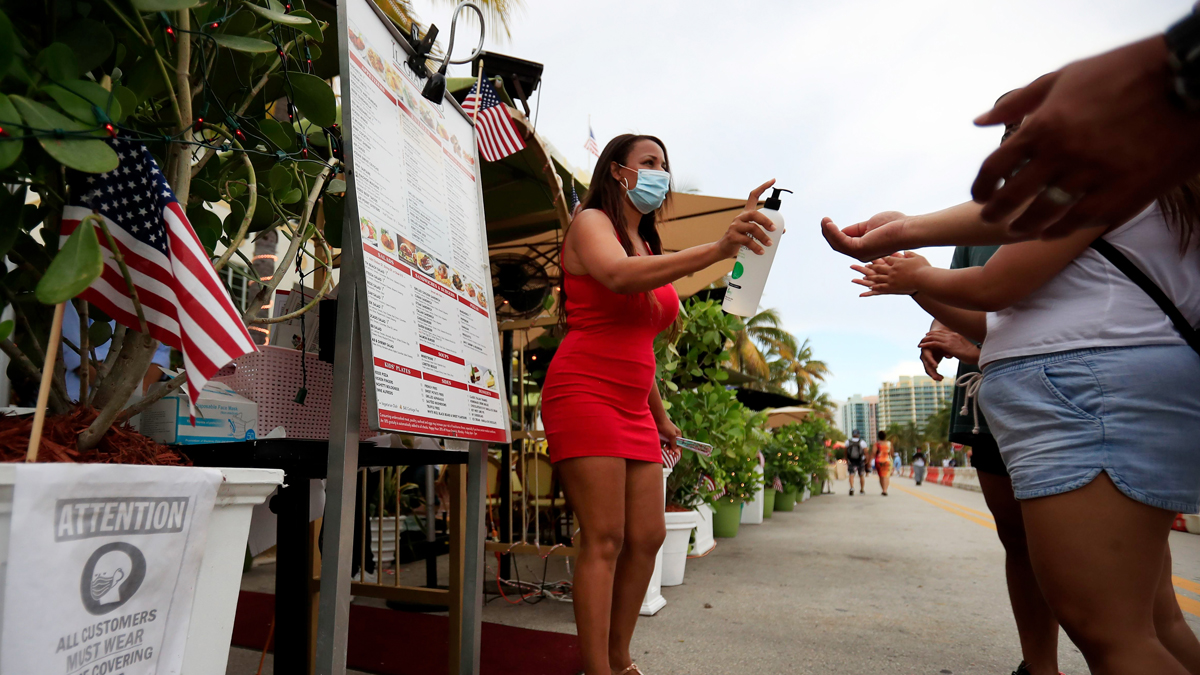 "We are still tracking the spike in the number of cases involving 18- to 34-year-olds that began in mid-June, which the County’s medical experts say was caused by a number of factors, including young people going to congested places — indoors and outside — without taking precautions such as wearing masks and practicing social distancing," Gimenez said in his press release.

"Contributing to the positives in that age group, the doctors have told me, were graduation parties, gatherings at restaurants that turned into packed parties in violation of the rules and street protests where people could not maintain social distancing and where not everyone was wearing facial coverings."

Miami Mayor Francis Suarez said hospitalizations in the city were at their highest levels since the outbreak, as Miami led the state in infections with nearly 30,000 COVID-19 cases as of Monday.

"In terms of the data that we're looking at, the news is not particularly good," Suarez said at a news conference Monday. "The statistics are very grave, every single metric is up."

Violations of coronavirus public health guidelines in Miami-Dade county can be reported at 305-4-POLICE.