The CDC recommends all students and teachers wear masks in school this year.

The question of whether Florida public school students will be required to wear masks seems to have been settled by Gov. Ron DeSantis. Last week, he signed an executive order prohibiting school districts from mandating masks, a move cheered by many parents.

Now the backlash has begun, from educators, doctors, and other parents, especially those whose kids have conditions that make them more susceptible to the coronavirus.

“It is just a horrible situation for us to be in, we’re in a public health crisis right now, and it can’t be political,” said Broward school board chair, Dr. Rosalind Osgood.

The board had voted unanimously last Wednesday to require all students and teachers to mask up on campus this school year, but the governor’s action threatens to pull state funding if his order is ignored. 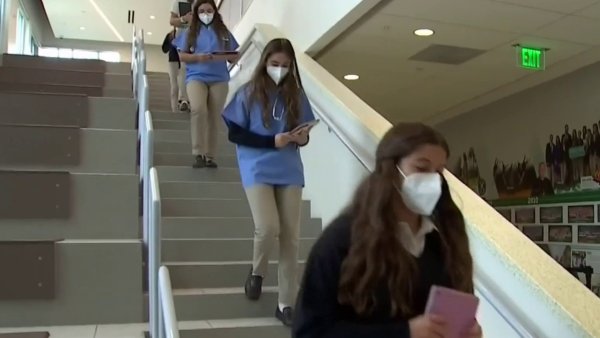 “Protecting the rights of parents to make this decision about wearing masks for their children,” DeSantis said last Friday, speaking of the goals of his order.

She’s a pediatrician and a mom with a daughter in a Broward County public school.

“Our children are the ones who lose out in this situation, either with safety or through funding,” Dr. Yasova Barbeau said, adding that the state should provide enough funding for schools to provide separate classrooms for masked and unmasked students.

“Everybody seems to be cowering down and letting the governor bully everybody, saying, 'oh, I’m gonna threaten funding.' That should not only be illegal, it’s an egregious abuse of power,” said Robyn McCarthy, whose son is entering the first grade at a Miami-Dade school.

McCarthy has signed on as a plaintiff in two lawsuits challenging the governor’s executive order. Her son has asthma.

“Now he’s putting us into a lion’s den,” the mother said when speaking of the governor, “Because I’m not given a choice because some parents are gonna send their kids without a mask and that means (her son) can’t go to school because that puts his health in danger and his health at risk.”

Her son's dad had a message for the governor.

Politics is getting in the way of cohesive public health measures in Florida. NBC 6's Kim Wynne reports.

The CDC recommends all students and teachers wear masks in school this year. That’s what kids did last year in South Florida, schools were widely praised for not being spreader environments, so educators are worried that voluntary masking will allow the Delta variant to spread in schools and into the community.

Now the Miami-Dade and Broward school districts will have to decide whether they’re willing to challenge the governor on this issue.

“Please feel free to reach out to your local legislators as well as please free to even reach out to the governor himself,” said interim Broward superintendent Dr. Vickie Cartwright in a message to parents. “I would encourage that.”