Artist Uses His Brush to Turn Surfside's Pain Into Hope

The painting was inspired by master cubists like Pablo Picasso and his masterpiece “Guernica,” which depicted a town in rubble after it was bombed during the Spanish Civil War.

Roberto Marquez flew from Dallas to Miami nearly two weeks ago, hoping to add his hands to those digging through the rubble of a fallen South Florida condo building. But once there, the muralist was disappointed to hear that his help was appreciated but not needed.

An epic search for victims was already underway by an army of first responders, initially for survivors and now for bodies. As of Friday, at least 79 people had been confirmed dead and dozens remained missing.

Still, the 59-year-old artist felt compelled to contribute to the cause, something that might uplift the Surfside community amid so much anguish. That's when he decided he would use his art to help translate pain into hope and resilience.

“What happened is a tragedy,” Marquez said Friday, as he brushed gray paint onto a canvass. “There is no way to get around this tragedy ... but one thing we can grab on, I say, is hope.”

His hands, one gripping a paintbrush, swept across a pair of giant canvasses he hung on a fence near the collapsed building that has become an impromptu memorial.

Photos of those who have perished and those who remain missing hang from the fence among wilting bouquets and above a growing collection of items — candles, stuffed animals, a football and even shoes — that people have left to honor and remember the victims.

In that memorial, Marquez sees a community in pain. Now and then, people come by to walk along the collection of memories. He sometimes sees people crying. 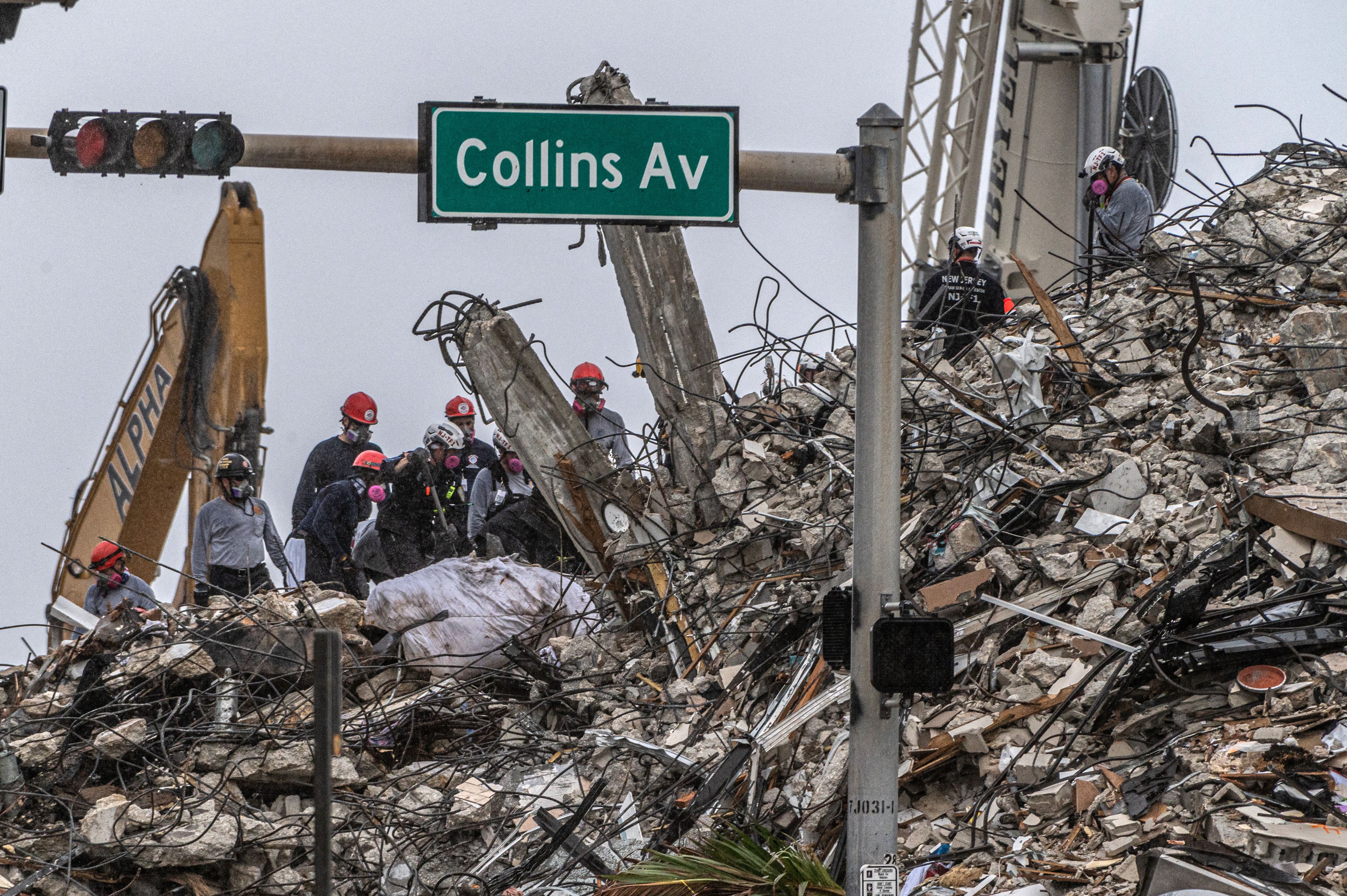 He hopes his huge work of art — each of the two panels measures 8 feet high and nearly 12 feet wide — will evoke other sentiments and serve as a tribute to the victims and for the grieving community.

Marquez said the painting was inspired by master cubists like Pablo Picasso and his masterpiece “Guernica,” which depicted a town in rubble after it was bombed during the Spanish Civil War.

On one side of Marquez's cubist painting, a first responder reaches upward for a victim. A fireman's ladder symbolizes the crews risking their lives in their attempt to save others. There's a woman being pulled out of the rubble. (She did not survive, Marquez explains.) A priest has his arms stretched out into the heavens, one hand clutching a cross.

And then there are the clocks, one fixed to 1:30 a.m., the moment when Champlain Towers South collapsed into rubble and dust on June 24.

Marquez at first thought about removing a dove — a symbol he used to depict the survivors waiting to be found — when officials announced earlier in the week that there was no hope anyone would be found alive. But upon reflection, he still thought it belonged.

“The story is here, and I’m trying to bring it out,” he said. His painting uses broad brushstrokes, figuratively, and he wants to leave it to the viewer to interpret the work — and paint in their own details as they view the massive artwork.

“Everyone is going to have their own different feelings,” Marquez said.

When the painting is done, perhaps over the weekend, he plans to auction it off and donate the proceeds to a fund for victims.

His painting is a gift to the city, he said.