More grieving family members tell jurors about the impact the MSD massacre has had on their lives.

But notably, there were no tears shed by the defendant in the Parkland school shooting, Tuesday.

Broward circuit Judge Elizabeth Scherer called for a couple of mid-afternoon recesses so people could compose themselves.

For the second day in a row, jurors heard the horrors that family members have endured after losing loved ones.

Alyssa Alhadeff’s parents – Broward School Board member Lori Alhadeff and father, Dr. Ilan Alhadeff – fought through tears with trembling voices to recall the good times with their daughter and the hell they have lived with since her death on Feb. 14, 2018.

“Inside, I burn like a damn inferno,” said Dr. Alhadeff.

“She had this infectious laugh that now I only get to watch on TikTok videos,” he added.

“This is not normal!” he shouted. 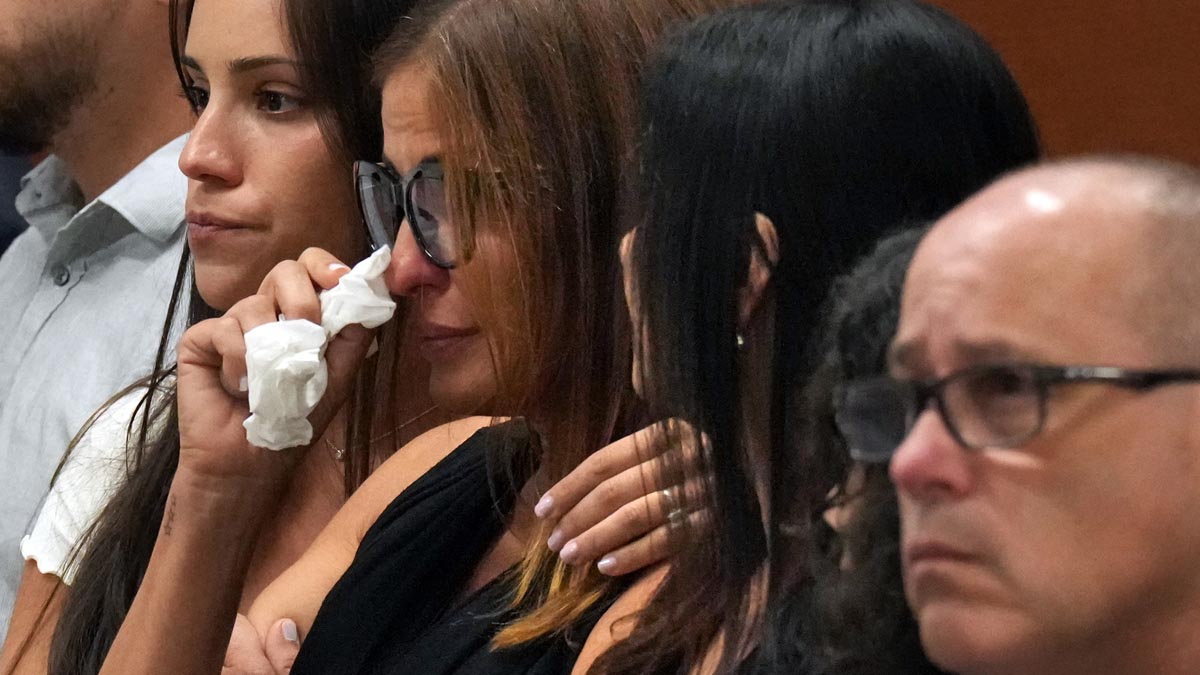 His wife Lori noted there was no word in the English language for a parent who outlives a child.

“Alyssa was my only daughter, my best friend and love of my life,” she said. “[She was the] heartbeat of our family.”

Alyssa’s grandmother took the witness stand to speak of the moments she shared before the 14-year-old was killed.

Theresa Robinovitz remembered hearing about the soccer game that team captain Alyssa played the night before she was murdered.

Ilan Marc Alhadeff is the father of Alyssa Alhadeff, who was killed in the 2018 mass shooting at Marjory Stoneman Douglas

“[My daughter Lori] shared with me afterwards that after that game she told Alyssa, she played the best game of her life,” Robinovitz said. “Alyssa’s response was, ‘I know Mom.'"

“The celebration of love on the national holiday of Valentine’s Day has only brought me back sorrow and memories of that tragic day,” she said.

Nicholas Dworet’s mother – Annika, with Nick’s father Mitchell Dworet by her side for support – talked about Nick’s dreams as captain of the swim team at Marjory Stoneman Douglas High School.

There was a note taped to the wall next to his bed that read: “I want to be a Swedish Olympian and go to Tokyo 2020 to compete for my country. I will train as hard as I can in and out of the water. Even on my hardest days, I swear to give it my all and I will let nothing stand in my way. Train harder.”

“Now we will never know if he had reached his goal to go to the Olympics,” Annika Dworet said. “Our hearts will always be broken."

Luke Hoyer’s parents and sister were the first to speak after the lunch break.

Mother Gina Hoyer said she is in agony and physically ill, but wears “Lukey Bear’s” cherished Christian cross with the hope it will give her comfort and the strength to cope.

“I pray each night and tell God to tell [Luke] how much I miss him and give him a hug and kiss for me,” she said.

Father Tom Hoyer said Luke was an unexpected addition to the family whose absence he still can't fathom.

“Luke was a surprise baby,” he said. “A wonderful, glorious surprise.”

Fred and Jennifer Guttenberg said the death of 14-year-old daughter Jaime has strained the family unit.

"I've never said this before," Fred Guttenberg admitted, choking back his emotions. "But, my son [Jesse] wishes it was him [who was killed]."

NBC 6's Julia Bagg has more from Day 10 of the trial in a Broward County courthouse.

"He has survivor’s guilt," said mother Jennifer Guttenberg. "He fears losing his family and will never be the same."

Jurors also heard from Shara Kaplan, the mother of victim Meadow Pollack, and representatives for the families of student victims Martin Duque and Carmen Schentrup, and teacher Aaron Feis.

Ten family members spoke, Tuesday, and three friends appeared on behalf of families that were too emotional to speak about their loss.

Tuesday’s testimony began with a Broward Sheriff’s Office crime lab ballistics expert doing a show-and-tell with the weapon and ammunition Nikolas Cruz used on the day he admitted to killing 17 and wounding 17 more.

The jury will have to decide whether Cruz is executed or is sentenced to life without parole. For him to get the death penalty, the jury must be unanimous.