Video posted online shows the moments Wednesday when seven people were arrested after police responded to a report of vandalism in Bayfront Park in Downtown Miami.

The video shows a group of police confronting a crowd of protesters. For several minutes, the crowd yells and curses at the police as they have someone in handcuffs behind them.

Protesters calling for police accountability spray painted the Columbus and Ponce De Leon statues in Bayfront Park - representing blood on the hands of early colonizers that led to thousands of deaths in early American history. 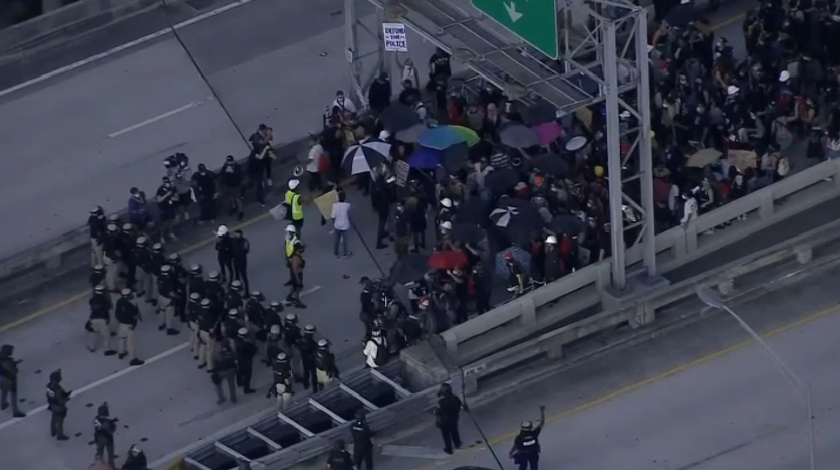 As the police begin to drive away, several in unmarked vehicles, people stand in their way on the street, not letting them pass. Then a man jumps on the hood of the unmarked car and another hits the car with a skateboard.

That’s when police get out of the car and take the man on the hood and the man with the skateboard to the ground as they arrest them. Police officers crowd around their peers in a very hectic situation. More and more people try and rush the officers, one hitting an officer with a skateboard.

Police ended up arresting seven people for charges ranging from battering a law enforcement officer to criminal mischief. Supporters of the seven arrested chanted outside the court as they faced a judge Thursday.

“Screaming at our officers, profanity, whatever - it’s nothing illegal. The minute they touch an officer; the minute they push an officer, or are breaking window - that’s it,” said Commander Freddie Cruz from City of Miami Police. “Beware of the agitators because it only takes two or three to make everyone lose the message and it can turn quite chaotic. Just be careful.”

Protesters have taken to the streets of Miami nearly every day since the killing of George Floyd in Minnesota at the hands of police officers. The vast majority of these protests have ended without confrontations and arrests.