WATCH: Two Taken Into Custody After Brawl Breaks Out At Miami International Airport

Video footage by Only in Dade showed a large crowd surrounding one of the officers, who had someone in a hold

Two men were taken into custody and are facing charges after a brawl broke out at Miami International Airport Monday night.

Miami-Dade police officers were called to gate H8 shortly after 6:30 p.m. after an airport employee reported a disturbance, officials said.

The employee said he was driving a transport cart when an unruly passenger refused to let him through, entered the cart, then broke the key and refused to exit the cart, police said.

When they arrived at the gate, officers found the "unruly passenger," identified as 30-year-old Mayfrer Gregorio Serranopaca.

Officers tried to calm the Serranopaca, who continued to refuse to exit the cart until a confrontation ensued, officials said. 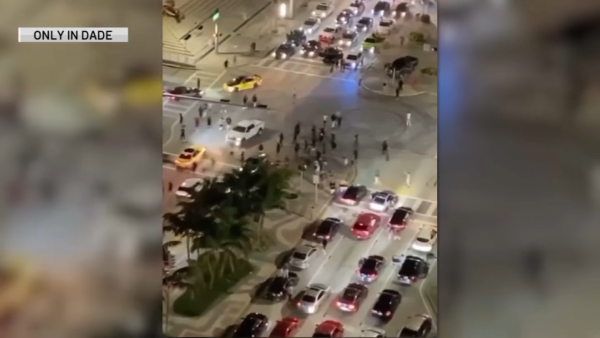 Video footage by Only in Dade showed a large crowd surrounding one of the officers, who had someone in a hold. The officer appeared to be grabbed and pushed by the crowd when he then let go of his hold.

He could then be seen holding what appears to be a weapon while radioing for help with his other hand.

Police said Miami-Dade Fire Rescue treated an officer at the scene who had been bitten on the head by Serranopaca.

Serranopaca was arrested on charges including aggravated battery on a police officer, burglary of an occupied conveyance, criminal mischief and false imprisonment.

A second man, 32-year-old Alberto Yanez Suarez, was also arrested on charges of aggravated battery on a police officer and resisting an officer without violence.

An arrest report said Yanez Suarez was seen grabbing and pulling officers off Serranopaca while they were trying to take him into custody.

Serranopaca, of Kissimmee, and Yanez Suarez, of Texas, were both booked into jail. Attorney information wasn't available.

"Like airports across the country, MIA is seeing record-high passenger numbers this winter travel season. Unfortunately, that passenger growth has come with a record-high increase nationwide in bad behavior as well, such as the incident this evening at MIA," said MIA Director and CEO Ralph Cutié in a statement. "Disruptive passengers face police arrest, civil penalties up to $37,000, being banned from flying, and potential federal prosecution. ... Please travel responsibly by getting to the airport extra early, being patient, complying with the federal mask law and airport staff, limiting your alcohol consumption, and notifying police at the first sign of bad behavior by calling 911.”

The circumstances surrounding the officer’s withdrawal of his weapon is being investigated, Miami-Dade Police said.