A white woman called the NYPD and accused a black man of threatening her and her dog after an exchange that started when the man asked the woman to leash her dog in Central Park.

The video of that incident went viral, with more than 40 million views in less than 48 hours -- and the woman in question has now lost her job and her dog, and is facing a city human rights investigation.

Christian Cooper captured part of the exchange in a video that was posted to Twitter by his sister. The woman, later identified as Amy Cooper, is shown on video asking Christian Cooper to stop recording her, or she was going to call the cops and tell them "there's an African American man threatening my life." She repeated the statement several times, each time sounding more distressed, while appearing to call 911 dispatch. 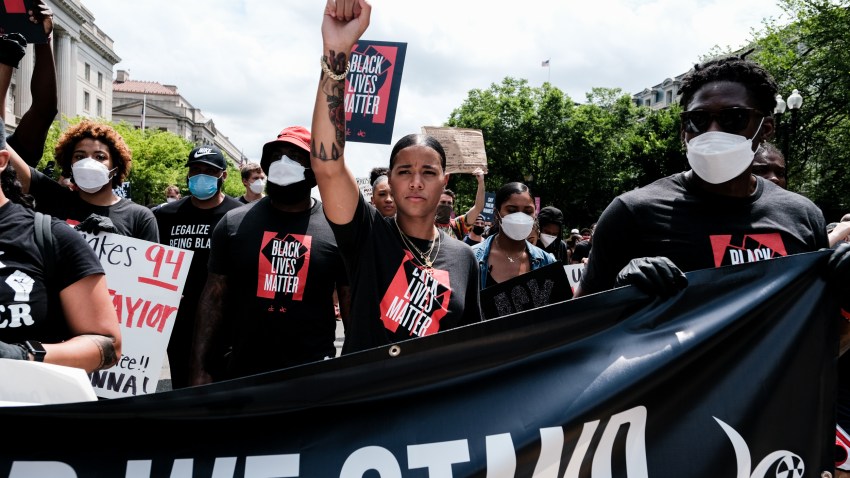 How to Change How America Is Policed

Meanwhile, Christian didn't appear to move any closer to Amy. He tells NBC New York that he's an avid bird watcher who was in The Ramble, a popular spot in the park for birders, around 8 a.m. Monday morning. He says he only asked Amy to put her dog on the leash in the area where it's required to have your dog on a leash at all times.

"If the habitat is destroyed we won’t be able to go there to see the birds, to enjoy the plantings," Christian explained on Monday night. When Amy refused, he says he offered her dog a treat and started recording the incident.

"The only way they can keep the dog from eating the treat is to put it on a leash," he said. "At some point, she decided I’m gonna play the race card, I guess."

When Christian refused to stop recording her, Amy grabs her dog's collar and moves away from him to call the police, the video shows.

"There is an African-American man. I am in Central Park. He is recording me and threatening myself and my dog," she said.

A white woman called the NYPD and accused a black man of threatening her following an exchange that started when the man asked the woman to leash her dog in Central Park. She's now issuing an apology after the video was seen millions of times. NBC New York's Checkey Beckford reports.

The woman repeats her assertions several times to dispatchers while struggling to keep the dog within her control, lifting the dog up and pulling it by its collar several times.

"We live in an age of Ahmaud Arbery where black men are gunned down because of assumptions people make about black men, black people, and I’m just not going to participate in that," Christian tells NBC New York, echoing the online criticism Amy received.

Christian stopped recording after Amy finally puts her dog on a leash. He is heard telling her, "Thank you."

By the time officers arrived, Christian had already left. The NYPD said no complaint or arrests were made after police determined the incident was a "verbal dispute." In a text on Tuesday, Christian said he'd be willing to accept the woman's apology.

Mayor Bill de Blasio described the video footage as "racism, plain and simple," and on Wednesday morning the City Commission on Human Rights said it was launching an investigation, which could lead to fines, damages and community service orders. (The NYPD has already said it will not pursue criminal charges.)

The Central Park Civic Association, which represents area businesses and residents, called for Amy Cooper to be banned from the park for life in a statement Tuesday.

Speaking exclusively to NBC New York on Monday, Amy says she overreacted but she claimed that Christian was screaming, and that she felt threatened because she didn't know what was in the dog treats.

"When I think about the police, I’m such a blessed person. I’ve come to realize especially today that I think of [the police] as a protection agency, and unfortunately, this has caused me to realize that there are so many people in this country that don’t have that luxury," she continued.

She told CNN on Tuesday that she is "not a racist," and added that she may have been "scared" because of where she was.

"When you’re alone in the Ramble, you don’t know what’s happening. It’s not excusable, it’s not defensible,” she said. Amy released an apology through a public relations service later in the day, saying she “reacted emotionally and made false assumptions about his intentions.”

“He had every right to request that I leash my dog in an area where it was required,” she said in the written statement. “I am well aware of the pain that misassumptions and insensitive statements about race cause and would never have imagined that I would be involved in the type of incident that occurred with Chris.”

As a result of the incident, Amy was first put on administrative leave Monday night by her employer Franklin Templeton, an investment management company, and later fired Tuesday afternoon.

In addition to criticism of racism, Amy also received criticism of animal cruelty because she appeared to be choking her dog for nearly a minute after she grabbed it by the collar.

Abandoned Angels Cocker Spaniel Rescue says Amy adopted the dog a few years ago and has "voluntarily surrendered" the dog while the incident is being addressed.

"The dog is now in our rescue’s care and he is safe and in good health," the rescue said.

In response to what happened, New York State Sen. Brian Benjamin introduced a bill that would add falsely reporting an incident to the list of hate crime eligible offenses.

"I worry that if she had not been filmed this woman may have been given the benefit of the doubt, and that this man could have face serious, perhaps life threatening consequences if the police had arrived," Benjamin said in a press release.