Like the Spanish flu, the coronavirus may never entirely disappear from our midst

The U.S. population a century ago was just one-third of what it is today, meaning the flu cut a much bigger, more lethal swath through the country. But the COVID-19 crisis is by any measure a colossal tragedy in its own right, especially given the incredible advances in scientific knowledge since then and the failure to take maximum advantage of the vaccines available this time.

“Big pockets of American society — and, worse, their leaders — have thrown this away,” medical historian Dr. Howard Markel of the University of Michigan said of the opportunity to vaccinate everyone eligible by now.

Like the Spanish flu, the coronavirus may never entirely disappear from our midst. Instead, scientists hope it becomes a mild seasonal bug as human immunity strengthens through vaccination and repeated infection. That could take time.

“We hope it will be like getting a cold, but there’s no guarantee,” said Emory University biologist Rustom Antia, who suggests an optimistic scenario in which this could happen over a few years.

For now, the pandemic still has the United States and other parts of the world firmly in its jaws. 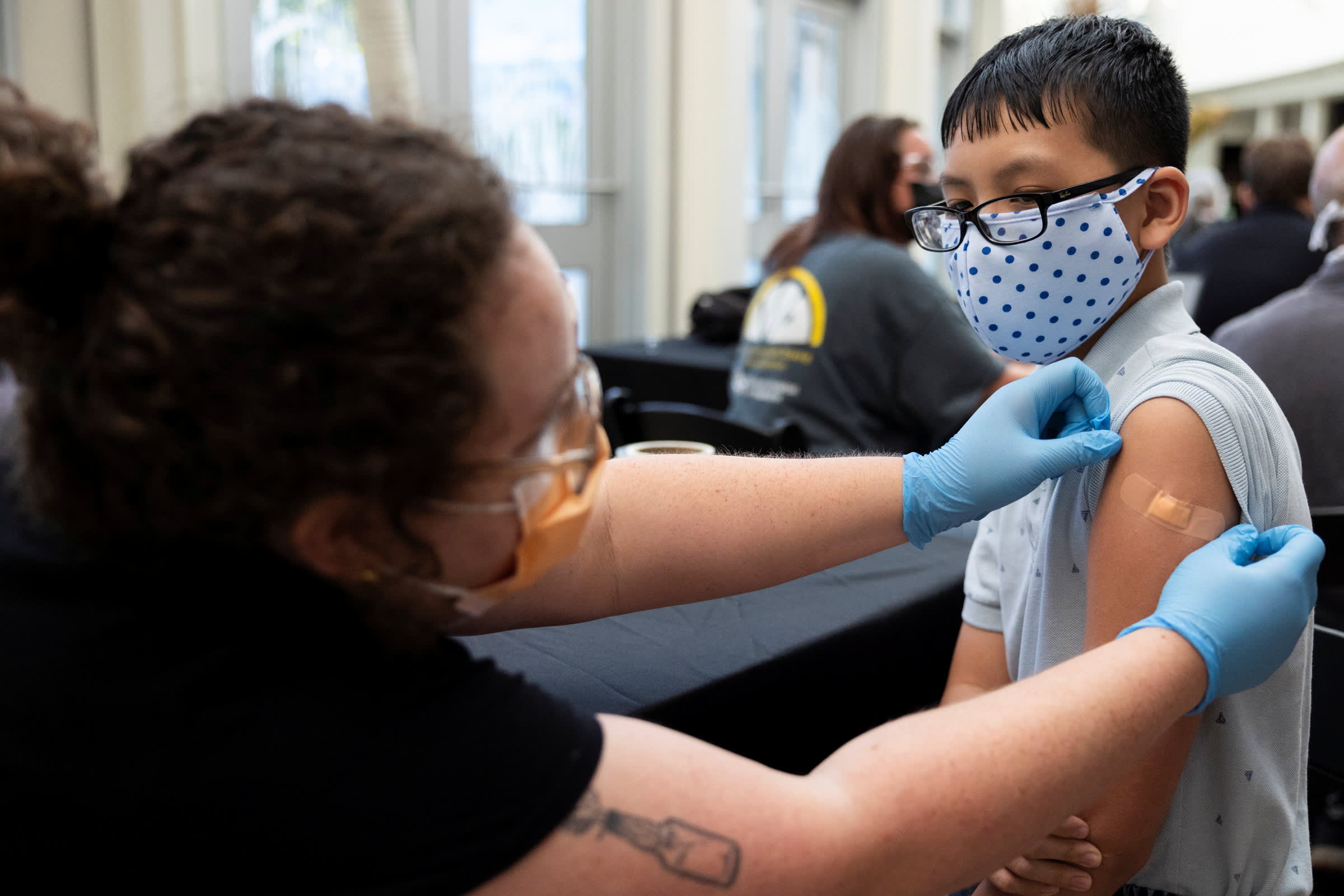 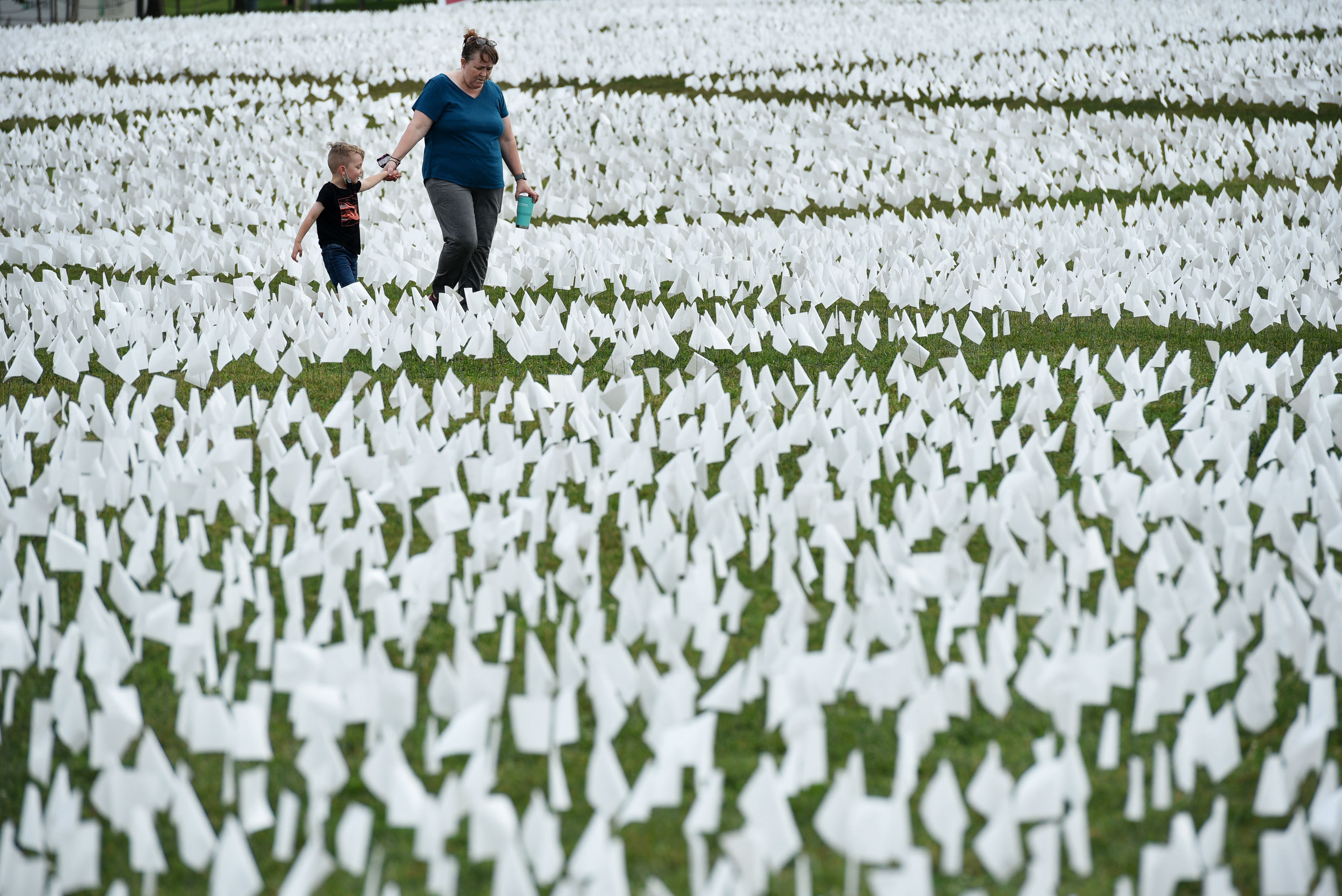 While the delta-fueled surge in infections may have peaked, U.S. deaths are running at over 1,900 a day on average, the highest level since early March, and the country's overall toll topped 675,000 Monday, according to the count kept by Johns Hopkins University, though the real number is believed to be higher.

Winter may bring a new surge, with the University of Washington's influential model projecting an additional 100,000 or so Americans will die of COVID-19 by Jan. 1, which would bring the overall U.S. toll to 776,000.

The 1918-19 influenza pandemic killed 50 million victims globally at a time when the world had one-quarter the population it does now. Global deaths from COVID-19 now stand at more than 4.6 million.

The Spanish flu's U.S. death toll is a rough guess, given the incomplete records of the era and the poor scientific understanding of what caused the illness. The 675,000 figure comes from the U.S. Centers for Disease Control and Prevention.

The ebbing of COVID-19 could happen if the virus progressively weakens as it mutates and more and more humans' immune systems learn to attack it. Vaccination and surviving infection are the main ways the immune system improves. Breast-fed infants also gain some immunity from their mothers.

Under that optimistic scenario, schoolchildren would get mild illness that trains their immune systems. As they grow up, the children would carry the immune response memory, so that when they are old and vulnerable, the coronavirus would be no more dangerous than cold viruses.

The same goes for today's vaccinated teens: Their immune systems would get stronger through the shots and mild infections.

“We will all get infected,” Antia predicted. “What’s important is whether the infections are severe.”

111-year-old Bernice Bohannon survived the pandemic of 1918. Monday, she got her vaccine to protect herself against the COVID-19 pandemic.

Something similar happened with the H1N1 flu virus, the culprit in the 1918-19 pandemic. It encountered too many people who were immune, and it also eventually weakened through mutation. H1N1 still circulates today, but immunity acquired through infection and vaccination has triumphed.

Getting an annual flu shot now protects against H1N1 and several other strains of flu. To be sure, flu kills between 12,000 and 61,000 Americans each year, but on average, it is a seasonal problem and a manageable one.

Before COVID-19, the 1918-19 flu was universally considered the worst pandemic disease in human history. Whether the current scourge ultimately proves deadlier is unclear.

In many ways, the 1918-19 flu — which was wrongly named Spanish flu because it first received widespread news coverage in Spain — was worse.

Spread by the mobility of World War I, it killed young, healthy adults in vast numbers. No vaccine existed to slow it, and there were no antibiotics to treat secondary bacterial infections. And, of course, the world was much smaller.

Yet jet travel and mass migrations threaten to increase the toll of the current pandemic. Much of the world is unvaccinated. And the coronavirus has been full of surprises.

Markel said he is continually astounded by the magnitude of the disruption the pandemic has brought to the planet.

“I was gobsmacked by the size of the quarantines” the Chinese government undertook initially, Markel said, “and I’ve since been gob-gob-gob-smacked to the nth degree.” The lagging pace of U.S. vaccinations is the latest source of his astonishment.

Just under 64% of the U.S. population has received as least one dose of the vaccine, with state rates ranging from a high of approximately 77% in Vermont and Massachusetts to lows around 46% to 49% in Idaho, Wyoming, West Virginia and Mississippi.

Globally, about 43% of the population has received at least one dose, according to Our World in Data, with some African countries just beginning to give their first shots.

“We know that all pandemics come to an end,” said Dr. Jeremy Brown, director of emergency care research at the National Institutes of Health, who wrote a book on influenza. “They can do terrible things while they’re raging.”

COVID-19 could have been far less lethal in the U.S. if more people had gotten vaccinated faster, “and we still have an opportunity to turn it around," Brown said. “We often lose sight of how lucky we are to take these things for granted.”

The current vaccines work extremely well in preventing severe disease and death from the variants of the virus that have emerged so far.

It will be crucial for scientists to make sure the ever-mutating virus hasn’t changed enough to evade vaccines or to cause severe illness in unvaccinated children, Antia said.

If the virus changes significantly, a new vaccine using the technology behind the Pfizer and Moderna shots could be produced in 110 days, a Pfizer executive said Wednesday. The company is studying whether annual shots with the current vaccine will be required to keep immunity high.

One plus: The coronavirus mutates at a slower pace than flu viruses, making it a more stable target for vaccination, said Ann Marie Kimball, a retired University of Washington professor of epidemiology.

So, will the current pandemic unseat the 1918-19 flu pandemic as the worst in human history?

“You’d like to say no. We have a lot more infection control, a lot more ability to support people who are sick. We have modern medicine,” Kimball said. “But we have a lot more people and a lot more mobility. ... The fear is eventually a new strain gets around a particular vaccine target.”

To those unvaccinated individuals who are counting on infection rather than vaccination for immune protection, Kimball said, “The trouble is, you have to survive infection to acquire the immunity.” It's easier, she said, to go to the drugstore and get a shot.

Over half of Zoo Atlanta’s 20 gorillas are showing symptoms of the virus, including 60-year-old Ozzie.