Crowds React With Joy, Wariness to Verdict in Floyd's Death

London Williams stood in Black Lives Matter Plaza in Washington, D.C., moments before the verdict was read in George Floyd's murder trial Tuesday, wondering how he would cope if the white police officer who killed the Black man was acquitted.

“I feel very nervous. It’s already hard as it is as a Black man in today’s society," said Williams, standing with a date in the space near the White House renamed after Floyd’s death last May. “If this doesn’t go right, I don’t know how safe I will feel.”

Then, the verdict came for former Minneapolis Officer Derek Chauvin: guilty on all counts. Williams, 31, doubled over with emotion, covered his face and wept.

With that outcome, Black Americans from Missouri to Florida to Minnesota cheered, marched, hugged, waved signs and sang jubilantly in the streets. But they also tempered those celebrations with the heavy knowledge that Chauvin's conviction was just a first, tiny step on the long road to address centuries of racist policing in a nation founded on slavery.

Minnesota Attorney General Keith Ellison spoke on Tuesday after Derek Chauvin was found guilty on three counts in the death of George Floyd.

Many said they had prepared for a different result after watching countless deaths of people of color at the hands of police go unpunished. The shooting death of another Black man, Daunte Wright, by officers in suburban Minneapolis during the trial and of 13-year-old Adam Toledo in Chicago last month heightened tensions and muted the court victory for many.

“We are relieved but not celebrating because the killing continues,” the Rev. Jesse Jackson, who traveled to Minneapolis for the verdict, said in a telephone interview. “We hope this is the breaking point to stop legal lynching.”

“Finally we did get some justice,” Gwen Carr, the mother of Eric Garner, a Black man who died at the hands of police in New York City in 2014, said after pronouncing herself “elated” at the verdict. No criminal charges were brought in her son's death; his last words were “I can’t breathe,” which became a rallying cry among activists.

In St. Louis, Missouri, a police association of predominantly Black officers called the verdict important but “a pebble in the ocean.”

Many saw the trial as a litmus test for how sincere Americans are about racial justice and consequential police reform after Floyd's death set off global protests. Jurors in the high-profile case deliberated for 10 hours over two days. Chauvin was handcuffed and taken into custody immediately after the verdict was read.

“It means so much to me,” said Venisha Johnson, a Black woman who cried at a gathering in what's been dubbed George Floyd Square in Minneapolis. “I’ve been praying for George every day, every morning at 6 a.m. I’m just so happy. The way he was murdered was terrible! But thank you, Jesus.”

In Houston's Third Ward, the historically Black neighborhood where Floyd grew up, a small crowd gathered under a tent near a mural of Floyd to listen as the verdict was read on TV. People driving by honked their car horns and yelled, “Justice!" 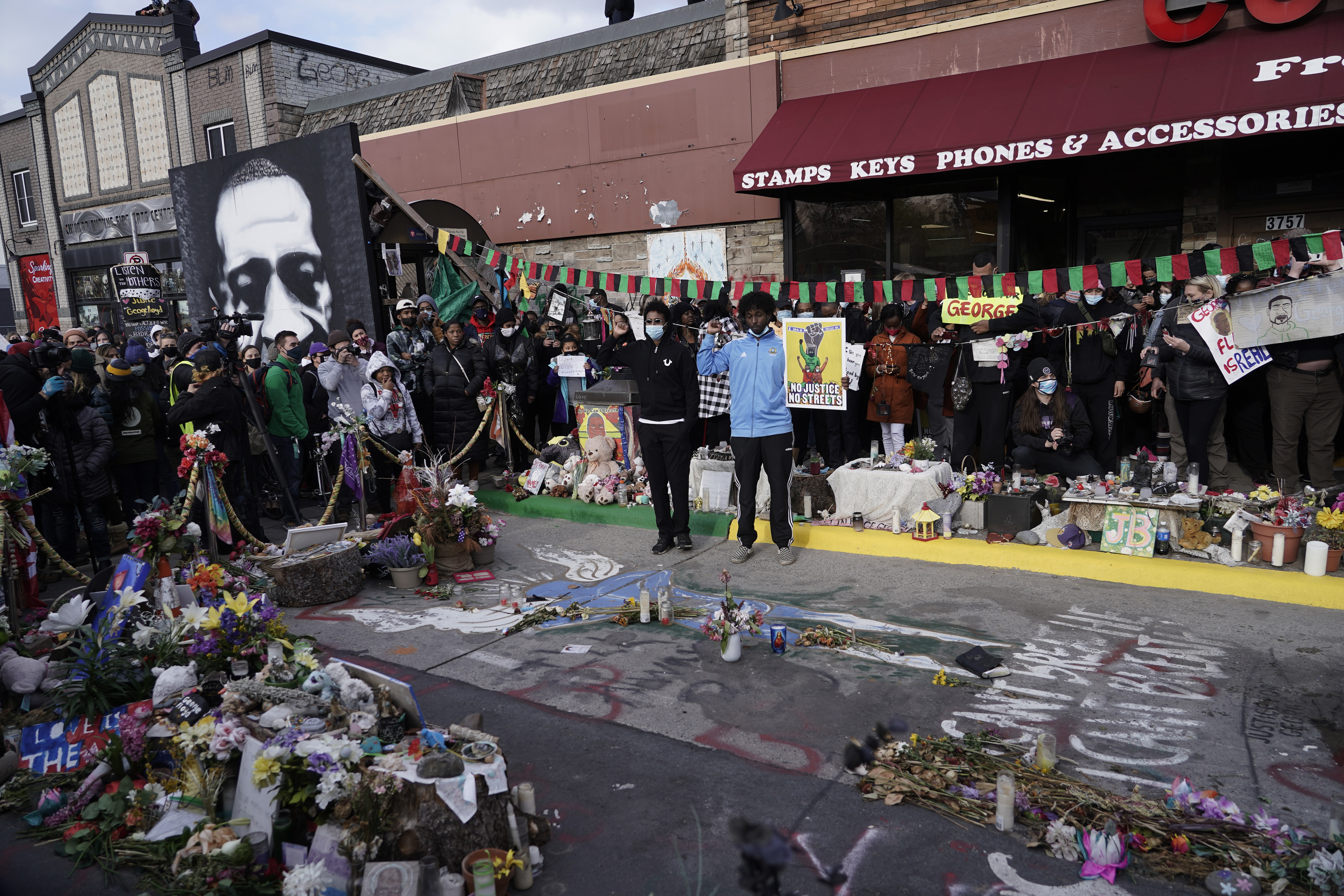 ‘Accountability': Reactions to Guilty Verdicts in the Derek Chauvin Trial

“We feeling good. We thank everybody that stood with us. It’s a blessed moment,” said Jacob David, 39, who knew Floyd and wiped away tears.

Floyd’s death on May 25, 2020, as Chauvin pressed a knee to his neck and the graphic bystander video that captured him pleading that he couldn't breathe shocked and appalled the world and triggered protests against police brutality and racial injustice.

Lisbon was one of 19 people arrested by police last September during a Black Lives Matter march.

“We just got so used to not hearing good news, to not having the justice system on your side for so long,” Lisbon said.

Republican leaders were cautious in their remarks.

“This is the way the system works,” said GOP Sen. Lindsey Graham of South Carolina. “I accept the jury’s verdict and leave it up to the court.”

Even as the conviction spread relief in many quarters, there were reminders of just how common killings by officers are in the U.S.: Just before the verdict was read, police in Columbus, Ohio, shot and killed a teenage girl as they responded to an attempted stabbing call, prompting protests there.

Law enforcement in many cities prepared for unrest.

In Grand Rapids, which had some of Michigan’s worst violence after Floyd’s death, authorities placed concrete barriers around the police building before the verdict was announced. Officials said they would protect the right to peacefully assemble but also wanted to be on guard for “chaos and destruction.”

After Derek Chauvin was found guilty on all counts for the death of George Floyd, the sentencing phase of his trial begins. Lakai Vinson, a criminal defense attorney, told NBCLX what to expect next.

Michigan Gov. Gretchen Whitmer called Tuesday’s verdict “a reminder to continue pushing for justice in every corner of our society."

And in Portland, Oregon, which has seen repeated protests and vandalism since Floyd’s death, the mayor declared a state of emergency and put state police and the National Guard on standby. Small groups of protesters have set fires, broken windows and vandalized buildings, including a church, a Boys & Girls Club and a historical society in recent days over the deaths of Wright and Toledo, as well as a fatal police shooting in Portland last week.

In overwhelmingly white Vashon Island off Seattle, resident Karen Oneil watched the verdict with her handmade sign half painted. One side said, “Justice For George.” She didn’t know what to write on the other — a message of joy or of protest — until the verdict came down.

When she headed to the island’s quaint downtown to wave it, the white paint reading “Hope Begins” was still wet.

“People can celebrate today, but there is a lot of work to be done,” Oneil said.