EXPLAINER: How US Is Expanding Aid to Ukrainian Refugees

While in Brussels, President Joe Biden said the U.S. would admit up to 100,000 Ukrainian refugees and provide $1 billion in humanitarian assistance

The United States is expanding efforts to help Ukrainian refugees. It has agreed to accept up to 100,000 people escaping from the war and to increase support for Eastern European nations that have taken in most of the people fleeing Russian forces.

It’s a modest number relative to the need, with an estimated 3.6 million refugees and millions more displaced within Ukraine. It’s also modest by historical standards, far less than the number who came from Southeast Asia decades ago.

A look at the situation:

What Did the US Announce Around Refugees Thursday?

While in Brussels to meet with European allies, President Joe Biden said the United States would admit up to 100,000 Ukrainian refugees and provide $1 billion in humanitarian assistance to countries affected by Russia's invasion of Ukraine.

The financial support is important because most of the approximately 3.6 million refugees who have fled Ukraine are in neighboring countries such as Poland, Moldova, and Romania and are posing a substantial burden.

“This is not something that Poland or Romania or Germany should carry on their own,” said Biden, who said he hopes to meet with refugees on his European trip. “This is an international responsibility.”

The White House has said for weeks that the U.S. would welcome Ukrainian refugees at some point, so the announcement wasn't a surprise. Officials have said, and continue to maintain, that most of the refugees want to remain in Europe because they have family there and can more easily return home once it's safe.

Speaking from the NATO Summit in Brussels on Thursday, President Joe Biden announced $1 billion in humanitarian aid to Ukraine and new sanctions against Russia. “NATO has never been more united than it is today. Putin is getting exactly the opposite of what he intended to have as a consequence of going into Ukraine.”

Who Is Coming, When and Where Will They Go?

Among the first Ukrainians refugees coming to the U.S. will be those who have family already in the United States, Biden said at a news conference.

U.S. refugee efforts will also focus on helping refugees who are considered particularly vulnerable following the Russian invasion, groups that include LGBTQ people, those with medical needs as well as journalists and dissidents, according to administration officials, who spoke to journalists on condition of anonymity to discuss the plan before the public announcement.

The administration did not provide a timeline but it's typically a lengthy process and the officials said all 100,000 may not necessarily arrive this year. Most of the refugees probably will settle in parts of the U.S. that already have large concentrations of Ukrainians. Such areas include the New York City area, Pennsylvania, Chicago and Northern California. 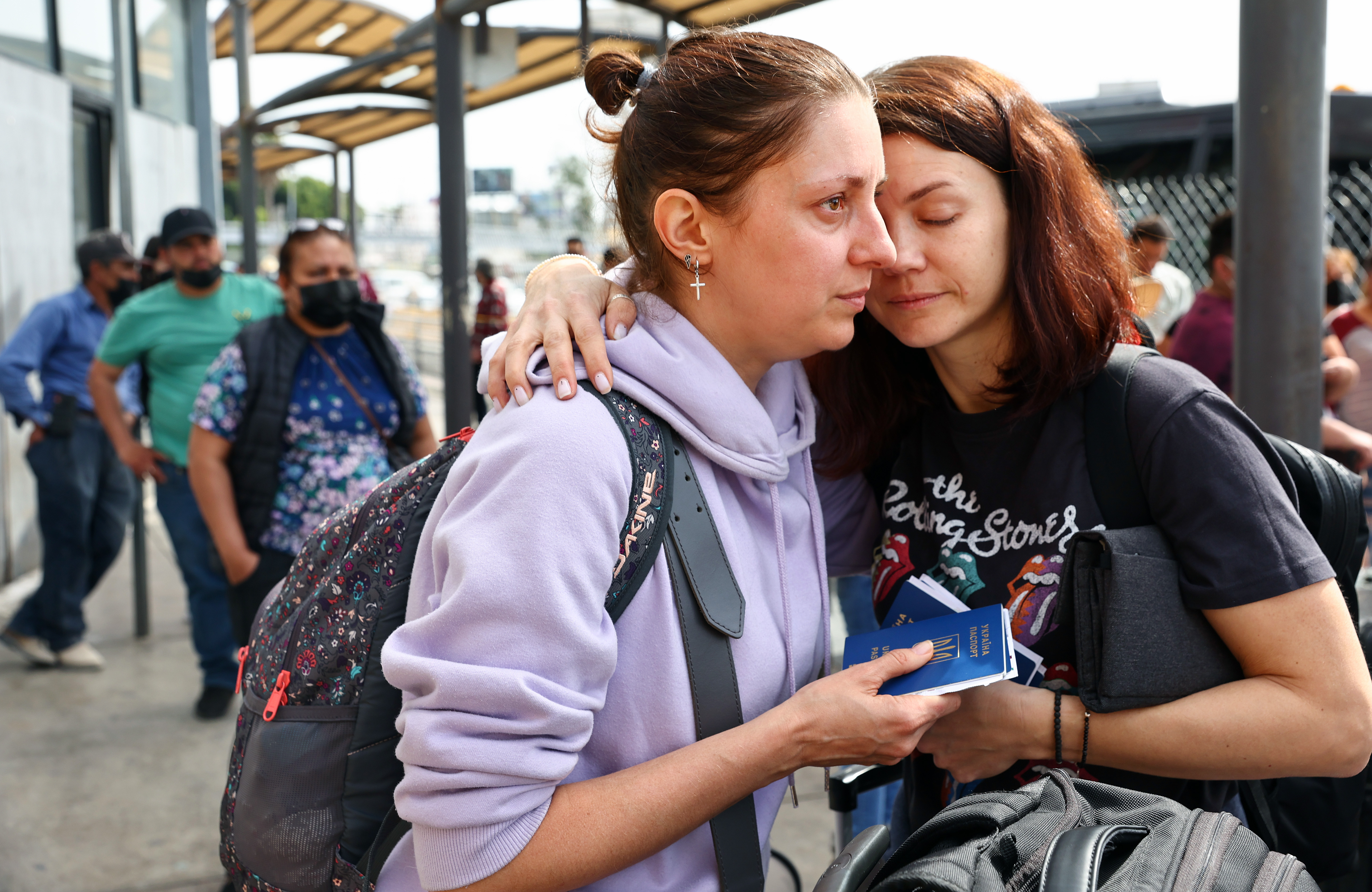 Not relative to the need, considering the number who have already fled Ukraine and the millions more who are displaced within the country.

It's also not large by historic standards. The U.S. took in more than 200,000 refugees, mostly from Southeast Asia, in 1980 alone. The total between 1975-1981 was more than 735,000, according to State Department figures. Since August, when the U.S. withdrew from Afghanistan, the U.S. has admitted more than 76,000 Afghans, including large numbers of former military interpreters and their families.

The administration, in consultation with Congress, set the annual cap of refugees for the 2022 budget year at 125,000, a total that does not include the evacuated Afghans. The administration says it does not immediately plan to seek to raise the cap because many of the Ukrainians can be brought to the U.S. under humanitarian parole or family reunification programs that are not counted against this cap.

Since Russia invaded Ukraine in late February, the U.S. has admitted few refugees despite almost 3 million people fleeing the country. One of them, 36-year-old Misha Pishak, successfully made it to New York City earlier this month, thanks to a work visa issued two years ago. He recalled his weeklong journey and what it was like to leave his parents behind to NBCLX storytellers Ngozi Ekeledo and Mackenzie Behm.

What Has Been the Reaction?

Refugee advocates had been urging the administration to expedite admissions following Russia's invasion of Ukraine. That's even as refugee resettlement agencies were struggling because of program cuts under President Donald Trump, whose administration slashed the refugee admissions cap to a historic low of 15,000.

Advocates welcomed Thursday's announcement, as did members of Congress with large Ukrainian populations in their districts, such as New Jersey Democratic Rep. Bill Pascrell.

"Until today, the rate of Ukraine refugee acceptance by our nation has lacked urgency," he said. “But this morning’s announcement by the Biden administration to accept 100,000 refugees from Ukraine has the urgency that is essential for this dark moment.”

There seems to be public support as well.