“We are trying to get the oxygen production started again. That is our responsibility, because many people depend on it," one of the brother who runs the plant said

As if Haiti’s 7.2 magnitude earthquake, a tropical storm and the coronavirus pandemic weren’t enough, the temblor damaged the only medical oxygen plant in the southern part of the country.

The building that housed the oxygen concentrator machines that the region depended on partially collapsed, and the machines were upended. The Etheuss company is run by the a family famous for their vetiver perfume oils plant in the city of Les Cayes, one of the areas hardest hit by Saturday's earthquake.

“We are trying to get the oxygen production started again. That is our responsibility, because many people depend on it,” said Kurtch Jeune, one of the brothers who run the plant, as he showed reporters through the damaged, rubble-strewn plants on Thursday.

The quake left concrete pillars and roofs at the facility leaning, and cement block rubble battered the tanks, electrical system and the delicate web of copper tubing that fills vital oxygen plants. “The oxygen generators are upside down,” Jeune said. “We did get a promise of help from the public works department to get the rubble out with excavators.”

Jeune said that, apart from two medical oxygen plants in the capital, Port-au-Prince, his factory was the only one serving local hospitals. As the COVID-19 pandemic grinds on, Jeune says demand for oxygen has gone up 200% in the last month.

“We have the capacity to supply 40 oxygen cylinders per day,” Jeune said. “We supply several hospitals.” 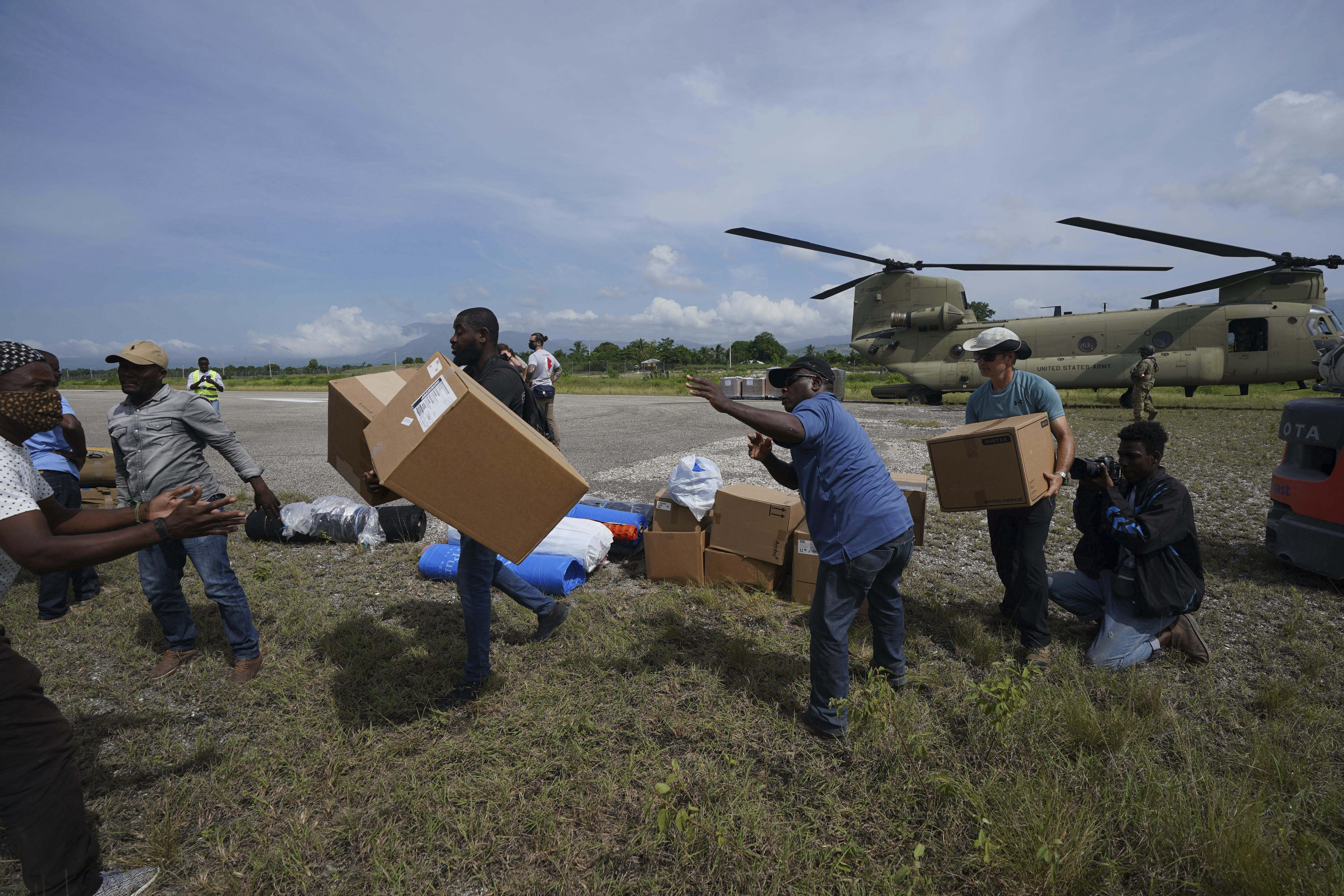 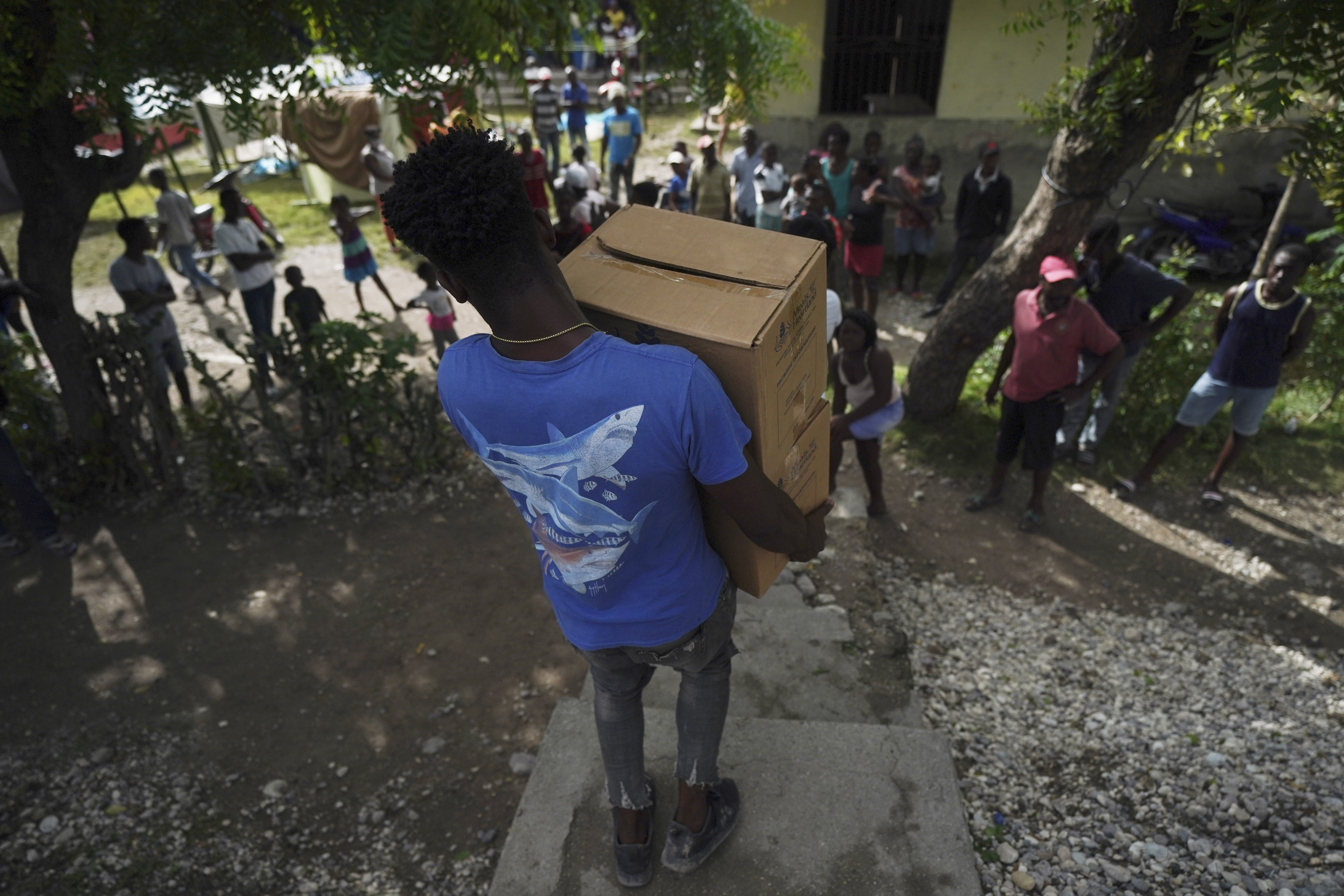 Desperation, Pressure for Aid Increase in Haiti After Quake

The powerful earthquake that struck Haiti's southwestern peninsula killed at least 2,189 and injured 12,268 people, according to official figures. More than 300 people are estimated to still be missing, said Serge Chery, head of civil defense for the Southern Province, which includes the small port city of Les Cayes.

More than 100,000 homes were damaged or destroyed, leaving about 30,000 families homeless, according to official estimates. Hospitals, schools, offices and churches also were demolished or badly damaged.

The earthquake was trailed by a tropical storm that brought heavy rain and strong winds at the beginning of the week.

Private relief supplies and shipments from the U.S. government and others began flowing more quickly into Haiti on Thursday, but the Caribbean nation’s entrenched poverty, insecurity and lack of basic infrastructure still presented huge challenges to getting food and urgent medical care to all those who need it.

Rescue teams continued to look through rubble for survivors on Monday, two days after a 7.2 earthquake hit Haiti.

Adding to the problems, a major hospital in the capital of Port-au-Prince, where many of the injured were being sent, closed for two days beginning Thursday to protest the kidnapping of two doctors, including one of the country’s few orthopedic surgeons.

The abductions dealt a blow to attempts to control criminal violence that has threatened disaster response efforts in the capital.

Further, a group of 18 Colombian volunteer search-and-rescue workers had to be escorted out of the quake-hit city of Jeremie under police protection after a false rumor circulated that they had been involved in the July 7 assassination of President Jovenel Moise. The workers took shelter Wednesday night at a civil defense office, and police escorted them to the airport on Thursday.

Moise’s killing, still unsolved, is suspected of being carried out by a group of Colombian mercenaries. Despite what happened to the Colombian rescue workers, Haiti is welcoming “everyone who is coming to bring assistance,” said Jerry Chandler, the head of the national Civil Protection Agency.

Health care facilities in the Western Hemisphere poorest nation were already at a critical point before the earthquake because of the pandemic. The country of 11 million people has reported 20,556 cases and 576 deaths of COVID-19, according to Johns Hopkins University.

Haiti received its first batch of U.S.-donated coronavirus vaccines only last month via a United Nations program for low-income countries.

The rest of Jeune’s factory, which produces an essential oil used in fine perfumes, was also badly damaged.

The family’s business processes bales of beige, stringy roots culled from the vetiver plant to produce more than half the world’s vetiver oil.

Vetiver oil is also used for cosmetics, soaps and aromatherapy. It generates an estimated $12 million in revenue a year and employs anywhere from 15,000 to 60,000 farmers.

Haiti produces more than 70 tons of vetiver oil a year, surpassing Indonesia, China, India, Brazil and the neighboring Dominican Republic. It is one of the country’s top exports, with up to 10,000 hectares (24,700 acres) harvested annually. But more than 60% of the crop still comes from individual producers, many of whom are struggling financially, according to Gabriel Gelin, a spokesman for the United Nations Environment Program in Haiti.

"In the past, the world came together but the aid did not get to the most vulnerable. And I hope this time will be different," says Laurent Lamothe, who served as Prime Minister of Haiti from 2012-2014. Though he's out of politics now, Lamothe is calling for world leaders to come together and help Haiti rebuild homes after an earthquake ruined homes and a tropical storm caused floods across the country 1 month after its president was assassinated.