The assembly of Ginsburg's former law clerks, who gathered to serve as honorary pallbearers, served as a stirring tribute to the late Supreme Court justice

An army of more than 100 clerks from Ginsburg's career, whom the court said were there to serve as honorary pallbearers, stood guard to meet her casket as it arrived at the high court just before 9:30 a.m. All of them wore masks, many of them in solemn black, and stood 6 feet apart in accordance with coronavirus guidance.

Ginsburg, the second woman to serve on the Supreme Court, died at her Washington home on Friday at 87 after complications from pancreatic cancer.

Several of the former clerks shared fond memories of Ginsburg with CNN.

"The justice taught us all a thing or two about a life well lived," said former clerk Lori Alvino McGill.

Amanda Tyler, who became a clerk for Ginsburg in 1999, said that even in the days leading up to her death, Ginsburg was still hard at work and had sent Tyler a draft of a book project. 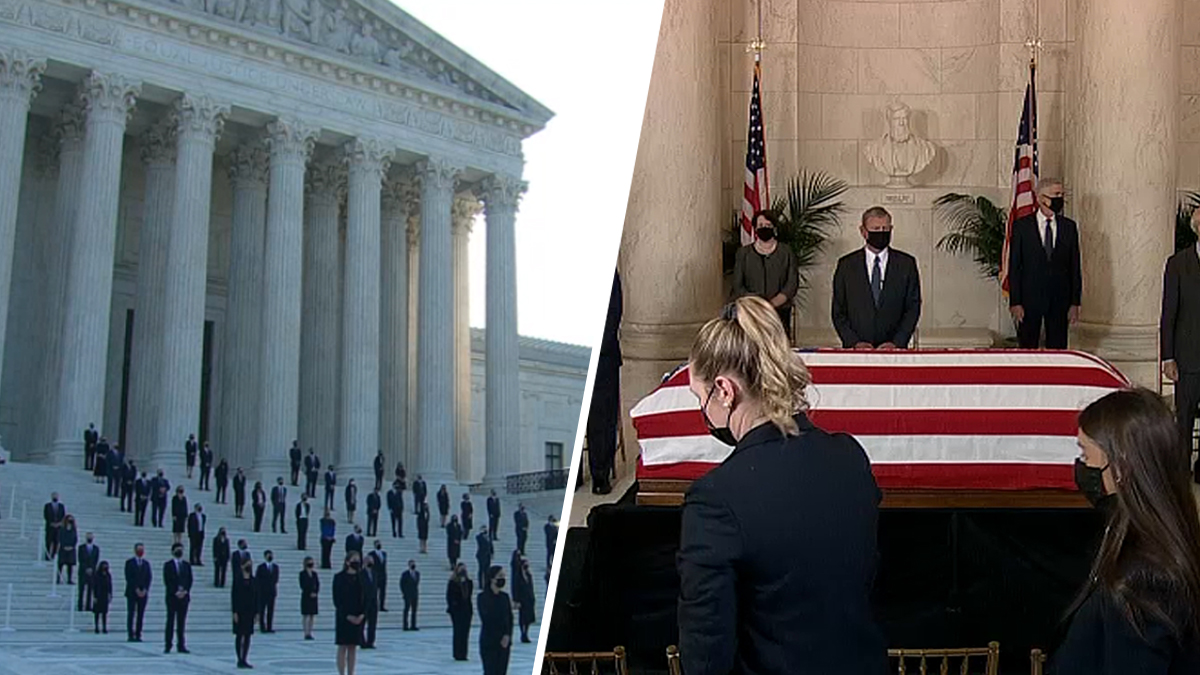 "She was still teaching me about the craft of writing — how important precision is, and to never use four words when three will do," Tyler said.

Ginsburg's casket was first brought into the Supreme Court for a private ceremony in the building's Great Hall, where the eight remaining members of the court gathered in person for the first time in months.

During the ceremony, Chief Justice John Roberts gave a eulogy remembering Ginsburg, who served 27 years on the high court and argued six cases before it earlier in her career.

“Subjected to discrimination in law school and the job market because she was a woman, Ruth would grow to become a leading advocate fighting such discrimination in court,” Roberts said. “She was not an opera star, but she found her stage right behind me, in our courtroom.”

Following the private ceremony, the casket will be brought outside for a public viewing. On Wednesday morning, hundreds of mourners had already gathered to pay their respects. President Donald J. Trump was expected to visit on Thursday.

Inside the court, other traditions were observed: Ginsburg's seat and the bench in front of it have been draped with black wool crepe, and a black drape has been hung over the courtroom doors. Flags at the court and at other federal buildings were being flown at half-staff.

After the public viewing at the Supreme Court, Ginsburg's casket will be brought to the U.S. Capitol for another ceremony; she will be the first woman to ever lie in state there. A private burial service will be held at Arlington National Cemetery, where she will be buried alongside her husband, Martin.