Mayor Vadym Boychenko told The Associated Press the death toll could be more than 20,000

The mayor of the Ukrainian port city of Mariupol said Monday that more than 10,000 civilians have died in the Russian siege of his city, and that the death toll could surpass 20,000, as weeks of attacks and privation leave the bodies of Mariupol's people “carpeted through the streets.”

Speaking by phone Monday with The Associated Press, Mayor Vadym Boychenko also accused Russian forces of having blocked weeks of thwarted humanitarian convoys into the city in an attempt to conceal the carnage there from the outside world.

Mariupol has been cut off by Russian attacks that began soon after Russian President Vladimir Putin launched the invasion of Ukraine in late February, and has suffered some of the most brutal assaults of the war. Boychenko gave new details of recent allegations by Ukrainian officials that Russian forces have brought mobile cremation equipment to Mariupol to dispose of the corpses of victims of the siege.

Russian forces have taken many bodies to a huge shopping center where there are storage facilities and refrigerators, Boychenko said.

“Mobile crematoriums have arrived in the form of trucks: You open it, and there is a pipe inside and these bodies are burned,” he said. 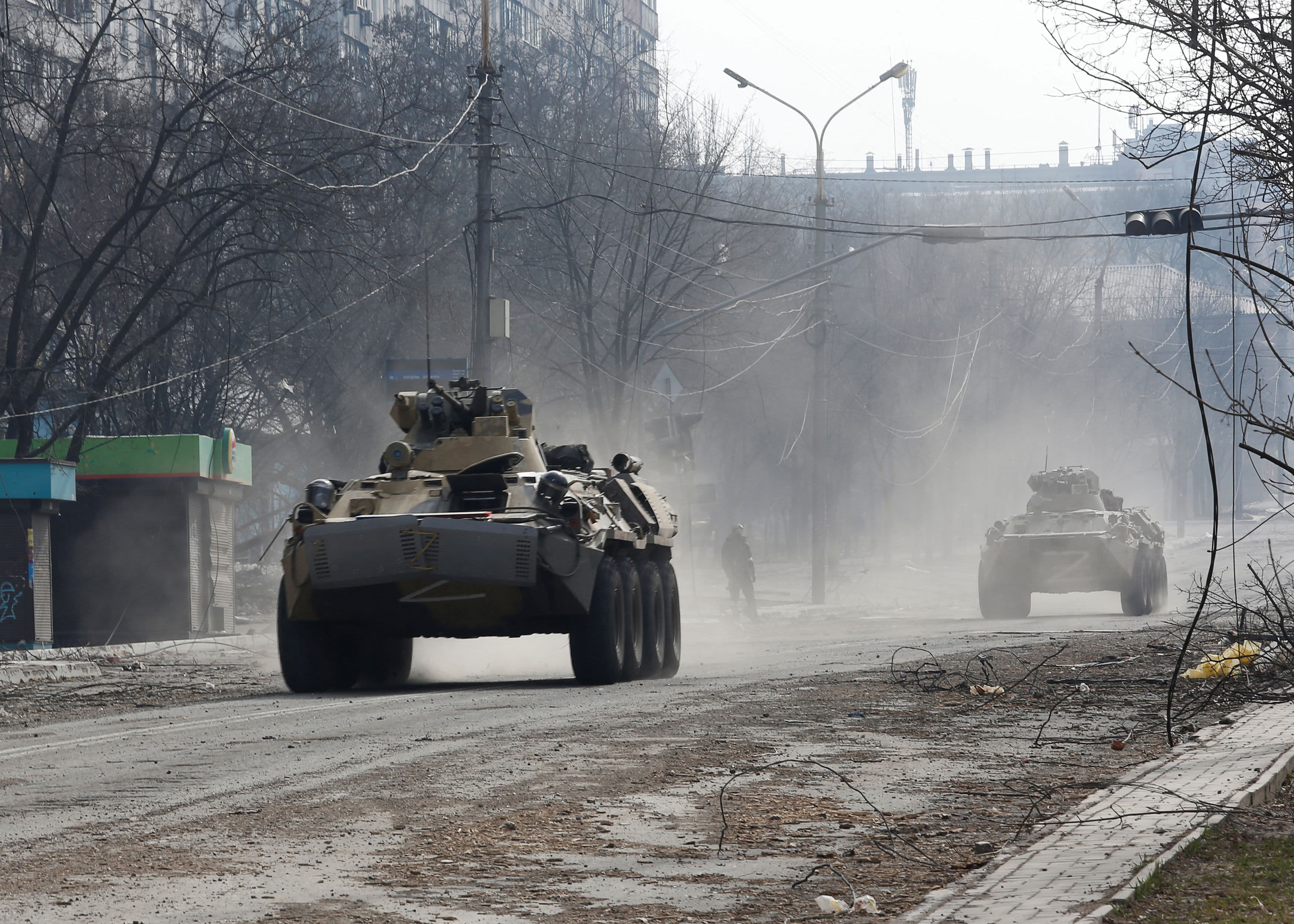 Boychenko spoke from a location in Ukrainian-controlled territory but outside Mariupol. The mayor said he had several sources for his description of the allegedly methodic burning of corpses by Russian forces in the city but gave few further details.

The discovery of large numbers of apparently executed civilians after Russian forces retreated from cities around the capital, Kyiv, this month already has given rise to widespread charges from Ukrainians and the West that Russia is committing war crimes in Ukraine.

Elsewhere Monday, U.S. officials pointed to new indications that Russia's military is gearing up for a major offensive in Ukraine's eastern Donbas region, switching its focus after Russian forces failed in their initial drive to capture Kyiv.

Moscow-backed separatists have been battling Ukrainian forces in the Donbas region since 2014, and have declared independent states. A major confrontation between the two countries' fighters in Donbas would allow Russia to try to use its numbers and greater military might to capture more territory there. Western military strategists say Russia also hopes to force Ukrainian fighters out into the open in more conventional battles in the east, rather than the successful hit-and-run attacks Ukrainian fighters have often employed so far.

Russia has appointed a seasoned general to lead its renewed push in the eastern Donbas region.

A senior U.S. defense official said Monday that a long Russian convoy is now rolling toward the eastern city of Izyum with artillery, aviation and infantry support, apparently for the looming offensive.

More artillery is being deployed near the city of Donetsk, while ground combat units that withdrew from around the Kyiv and Chernihiv areas appear destined for refitting and resupplying before they position in Donbas, said the official, who spoke on condition of anonymity to discuss internal U.S. military assessments.

With their offensive in many parts of the country thwarted, Russian forces have relied increasingly on bombarding cities — a strategy that has flattened many urban areas and killed thousands of people.

Ukrainian authorities accuse Russian forces of committing atrocities, including a massacre in the town of Bucha, outside Kyiv, airstrikes on hospitals and a missile attack that killed at least 57 people last week at a train station.

In Bucha on Monday, the work of exhuming bodies from a mass grave in a churchyard resumed.

Galyna Feoktistova waited for hours in the cold and rain in hopes of identifying her 50-year-old son, who was shot and killed more than a month ago, but eventually she went home for some warmth. “He's still there,” her surviving son, Andriy, said.

In Mariupol, about 120,000 civilians are in dire need of food, water, warmth and communications, the mayor said.

Only those residents who have passed the Russian “filtration camps” are released from the city, Boychenko said.

Ukrainian officials say Russian troops are confiscating passports from Ukrainian citizens then moving them to “filtration camps” in Ukraine’s separatist-controlled east before sending them to distant, economically depressed areas in Russia.

Boychenko said Monday that improvised prisons were organized for those who did not pass the “filtering,” while at least 33,000 people were taken to Russia or to separatist territory in Ukraine.

In a statement released by his office, Nehammer said his primary message to Putin was “that this war needs to end, because in war both sides can only lose.” Nehammer said he also raised the issue of war crimes committed by the Russian military and said those responsible “will be held to account.”

Austria is a member of the European Union and has backed the 27-nation bloc’s sanctions against Russia, though it so far has opposed cutting off deliveries of Russian gas. The country is militarily neutral and is not a member of NATO.

In other developments, the head of the separatist rebel government in Donetsk claimed Ukrainian forces have lost control of the port area of Mariupol.

“Regarding the port of Mariupol, it is now under our control,” Denis Pushilin, president of the Donetsk People’s Republic, told Russian state television, according to Russian news agencies. The claim could not immediately be confirmed.

Ukraine refused Russia’s demands to surrender the city of Mariupol.

But Mariupol's mayor said fighting continues at the port. "It is difficult, but our heroic military holds on,” Boychenko said.

Both sides are digging in for what could be a devastating war of attrition.

Russian forces will likely try to encircle the Donbas region from the north and the south as well as the east, said retired British Gen. Richard Barrons, co-chair of the U.K.-based strategic consulting firm Universal Defence & Security Solutions.

The ground in that part of Ukraine is flatter, more open and less wooded — so the Ukrainian ambush tactics used around Kiev may be less successful, Barrons said.

“As to the outcome, it’s finely balanced right now,” Barrons said. If the Russians learned from their previous failures, concentrated more force, connected their air force to ground forces better and improved their logistics, "then they might start to overwhelm the Ukrainian positions eventually, although I still think it would be a battle of enormous attrition.”

The Pentagon said it had seen no evidence to support Russia’s claims. And Lubica Janikova, spokeswoman for Slovakia's prime minister, denied Monday that the S-300 system it sent Ukraine had been destroyed.

Questions remain about the ability of depleted and demoralized Russian forces to conquer much ground after their advance on Kyiv was repelled by determined Ukrainian defenders.

Britain’s Defense Ministry said Monday that Ukraine has already beaten back several assaults by Russian forces in the eastern Donetsk and Luhansk regions — which make up the Donbas — resulting in the destruction of Russian tanks, vehicles and artillery.

Western military analysts say Russia's assault increasingly is focusing on an arc of territory stretching from Kharkiv, Ukraine’s second-largest city, in the north, to Kherson in the south.

A residential area in Kharkiv was struck by incoming fire on Monday afternoon. Associated Press journalists saw firefighters putting out the fire and checking for victims following the attack, and saw that at least five people were killed, including a child.

Oleh Synyehubov, the regional governor of Kharkiv, said earlier Monday that Russian shelling had killed 11 people over the last 24 hours.