More Cubans Immigrating to the US by Crossing From Mexico

U.S. border authorities encountered Cubans almost 32,400 times in March, according to figures released Monday, a number that has risen sharply in recent months

For years after leaving Cuba, the mother of two tried to get her children and parents into the U.S. through legal channels.

Finally, she decided she wouldn’t wait any longer: She paid more than $40,000 dollars to someone to help them sneak in through Mexico.

“I said to myself, 'Enough. I am going to risk everything,'” said the 30-year-old woman, who spoke to The Associated Press on condition of anonymity for fear of reprisals from U.S. authorities.

Her family’s story is an example of what tens of thousands of Cuban immigrants looking to escape political and economic troubles are going through as more risk their lives and arrive illegally in the United States. It's a very different reality from years ago when Cubans enjoyed special protections that other immigrants did not have.

Her children and parents undertook a 20-day journey, starting with a plane ride from Havana to Managua, Nicaragua. From there, they took buses, vans and taxis across Honduras, Guatemala and Mexico, until they arrived at the U.S.-Mexico border.

“I saw that other people were coming through the border and they were happy, and I, who had done things legally, was still waiting for my children,” the woman said.

U.S. border authorities encountered Cubans almost 32,400 times in March, according to figures released Monday. That was roughly double the number in February and five times the number in October.

The increase coincided with Nicaragua’s decision starting in November to stop requiring visas for Cubans to promote tourism after other countries, such as Panama and the Dominican Republic, began mandating them.

After flying to Nicaragua, Cubans travel by land to remote stretches of the U.S. border with Mexico – mainly in Yuma, Arizona, and Del Rio, Texas – and generally turn themselves in to Border Patrol agents.

The Biden administration has been leaning on other governments to do more to stop migrants from reaching the U.S., most recently during a visit this week to Panama by Secretary of State Antony Blinken and Homeland Security Alejandro Mayorkas. The actions of Nicaragua, a U.S. adversary, complicates that effort.

Cuban and U.S. officials will meet Thursday in Washington for immigration talks— the first in four years.

U.S. Customs and Border Protection stopped Cubans more than 79,800 times from October through March — more than double all of 2021 and five times more than all of 2020. Overall, the Border Patrol stopped migrants of all nationalities more than 209,000 times in March, the highest monthly mark in 22 years.

Cubans who cross the U.S. border illegally face little risk of being deported or expelled under a public health law that has been used to deny asylum to thousands of migrants of other nationalities on the grounds of slowing the spread of COVID-19. 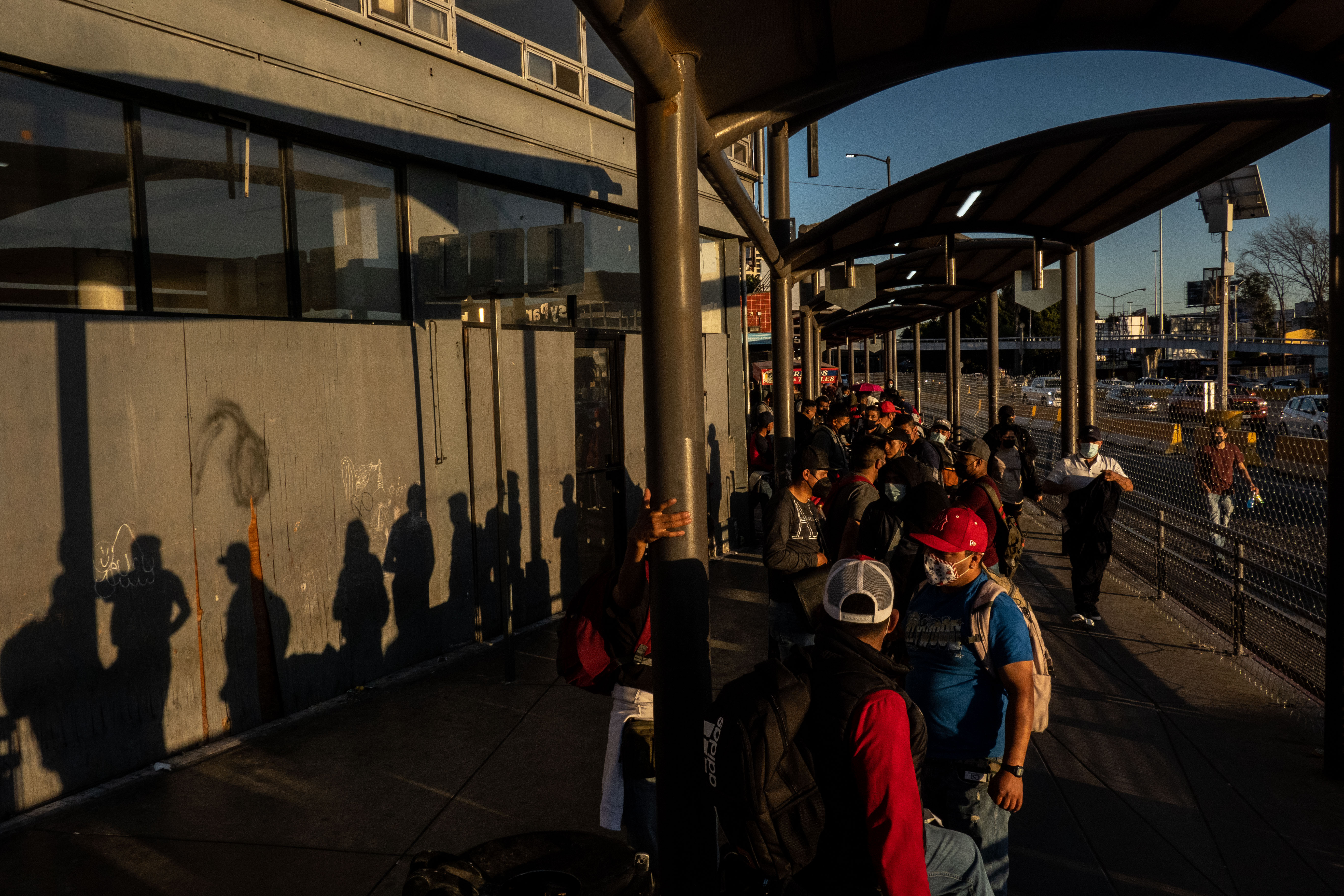 Migrant Crossings Spike as US Plans to Lift Curb on Asylum

Jorge Duany, director of the Cuban Research Institute at Florida International University, and other experts estimate the number of Cubans leaving could exceed other mass migrations from the island, including the Mariel boatlift of 1980, when more than 124,700 Cubans came to the U.S.

“There are several intertwined factors that have produced a perfect storm for the intensification of the Cuban exodus,” Duany said.

For one, Cuba is experiencing its worst economic crisis in decades due to the COVID-19 pandemic and the tightening of U.S. sanctions.

Massive street protests on July 11, 2021, and the government’s response also have played a role. Nongovernmental organizations have reported more than 1,400 arrests and 500 people sentenced to up to 30 years in prison for vandalism or sedition.

Havana has not said how many Cubans have left and has accused the United States of manipulating the situation and offering perks that encourage departure.

“What hurts? That there are young people who find that their future plans can’t develop in the country and have to emigrate,” Cuban President Miguel Díaz-Canel said early this month. “There are people who want to prove themselves in another world, who want to show they aren’t breaking with their country, that their aspiration is also to improve a little and later return.”

The Cuban Family Tired of Waiting

The 30-year-old woman who tried to bring her family to the U.S. through legal avenues had arrived in Florida in a raft in 2016. Under the “wet foot, dry foot” policy, Cubans could stay if they made it to U.S. land, but they were sent back if apprehended at sea.

Former President Barack Obama ended that policy in 2017, and she petitioned for immigration for her children the next year.

Every month, she sent her family $500 for medicine and food, along with boxes of clothes and other items, she said from her home in Tampa, Florida.

Finally, she decided to pay $11,000 to smugglers for each of her relatives: her two children, ages 8 and 10, and her mother and father.

Her parents sold everything, including their house and furniture, before embarking on the journey with both children, explained the single mother.

In Managua, they met 200 other migrants — Cubans, Haitians, Venezuelans and Nicaraguans — at a hotel.

“That same day they start a caravan by car, truck, or any kind of vehicle. In one night, they got into more than 10 different cars,” the woman said.

After 20 days, they arrived in Mexicali, Mexico, crossed the Colorado River at night and surrendered to Border Patrol agents in Yuma, Arizona.

They were separated. The grandparents, 45 and 62 years old, were released in two days; their grandchildren were detained for 11 days, the woman said.

The Cuban Man Who Feared for His Life

Other Cubans say they left because they felt persecuted.

Ariel, 24, worked doing blood tests at a laboratory in a hospital in Cienfuegos, on Cuba's south coast. During the pandemic, he led a protest demanding masks, gowns and disinfectants and criticized the government on Facebook for the lack of medical supplies.

He told the AP in a phone interview that he decided to leave in November after receiving threats and being beaten. He requested that only his middle name be used because his mother and 14-year-old sister in Cuba could face reprisals.

His whole trip “was a nightmare,” Ariel recalled, but he said that he was “willing to do whatever it took” to leave Cuba.

He made his way to Mexicali, with help from an aunt in Florida, and paid a smuggler $300 to take him across the Colorado River.

He joined about 100 migrants, 90 of them Cubans, who boarded a truck at midnight, he said.

The river was calm but deep. Water covered his waist. He helped a Cuban mom by carrying her child on his shoulders.

The smuggler gave them directions to a place where Border Patrol agents would pick them up.

They waited two days at a migrant camp with 1,000 other people, eating bread and canned food. Border Patrol agents picked them up in groups of 12 and took them to a center in Yuma that Ariel said “seemed like a prison.”

After his release, he called his aunt to let her know that he was ready to fly to St. Petersburg, Florida.

Living in the U.S.

Many Cubans who crossed illegally say they now feel like they are in limbo.

“The most difficult situation is going to be here, not when crossing (the border),” said Dr. Raúl González, a Cuban American who owns a clinic that helps new arrivals with paperwork to receive assistance for a few months. “They are like stranded here.”

It can take some time for asylum seekers to obtain a work permit.

At Gonzalez’s clinic, Cubans lined up to secure one of the 20 appointments available each day.

“It is sad what they are going through,” said the doctor. “Many tell me, ‘Don’t give me food stamps, I would prefer that they let me work.’”

AP journalist Andrea Rodríguez contributed to this report from Havana.