SNL Zeroes in on Trump’s Debate

Darrell Hammond returned to 30 Rock to do his best Donald.

"Saturday Night Live" alum Darrell Hammond reprised his role as Donald Trump on this week’s broadcast, appearing on a Kristen Wiig-helmed farce of Greta Van Susteren’s "On The Record."

Hammond played an overly pompous Trump, touting his qualifications as moderator to his recently announced Republican primary debate. Off the bat, he noted his massive net worth, his “something like 5 billion” viewers of The Apprentice, and the 38-year age difference between Trump and his wife as debate credentials.

The skit further stretched the mileage of Trump’s obsession with President Obama’s birth certificate, saying viewers of his upcoming debate would get some new information as to the president’s citizenship. 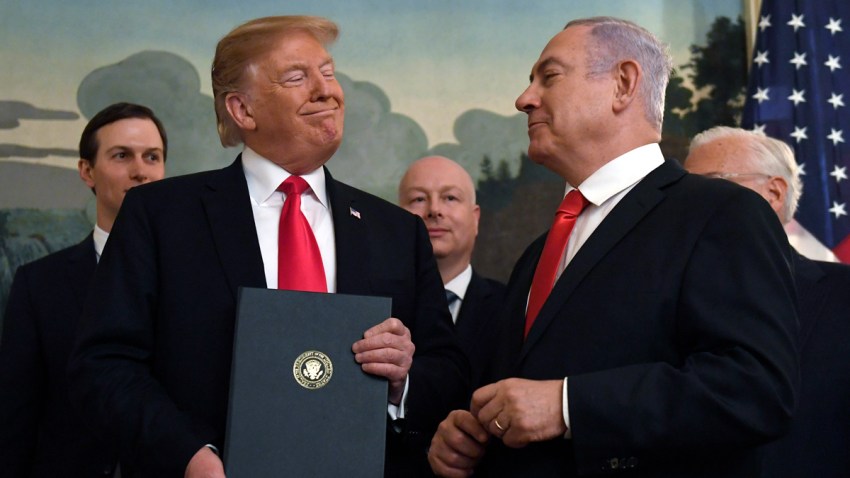 The only two candidates who’ve agreed to the debate, Rick Santorum and Newt Gingrich appeared alongside Trump and Sustren’s caricatures.

As per usual, Andy Samberg’s Santorum impression got very few lines, pulling just an indignant “hey!” after Trump/Hammond said, “Let’s face it, the guy’s a real loser.” Bobby Moynihan’s Newt Gingrich impersonation was unusually mum however, only affecting hurt after Trump/Hammond called him a “nobody” with a closet full of “nasty skeletons.”

Sustren/Wiig’s lip flipped with “will I, won’t I” speculation over whether the debate was a ploy to draw more attention before Trump announces a presidential campaign. Trump/Hammond said he wouldn’t rule out an Independent run.

As to how he’d put pressure on foreign threats?

“I’ll tell you what I would do Greta,” Trump/Hammond said, “I’d get the Iranians, the Chinese and the leaders of OPEC together in a room – not at the White House, but at my house in Florida, Mar-a-Lago. Again: 90,000 square feet. Greta, trust me. They would be so disoriented by its square-footage, they would be at a disadvantage. And then I would read them the riot act and tell them to cut out all this BS.”