Standing before a Congress and nation sharply divided by impeachment, President Donald Trump used his State of the Union address Tuesday to extol a "Great American Comeback" on his watch, just three years after he took office decrying a land of "American carnage" under his predecessor.

The partisan discord was apparent for all to see as the first president to campaign for reelection while facing impeachment vigorously made his case for another term: Republican legislators chanted "Four More Years." House Speaker Nancy Pelosi ripped up her copy of Trump's speech as he ended his address.

"America's enemies are on the run, America's fortunes are on the rise and America's future is blazing bright," Trump declared. "In just three short years, we have shattered the mentality of American decline and we have rejected the downsizing of America’s destiny. We are moving forward at a pace that was unimaginable just a short time ago, and we are never going back!"

President Donald Trump recognized Venezuelan opposition leader Juan Guaidó, who was in attendance at Trump’s State of the Union address.

Holding out the nation's economic success as the chief rationale for a second term, Trump’s speech resembled a lower-volume version of his campaign rallies, providing something for every section of his political base.

But while he tweets daily assailing his impeachment, Trump never mentioned the "i-word" in his 78-minute speech. That followed the lead of Bill Clinton, who did not reference his recent impeachment when he delivered his State of the Union in 1999. Trump spoke from the House of Representatives, on the opposite side of the Capitol from where the Senate one day later was expected to acquit him largely along party lines.

Pelosi, a frequent thorn in Trump's side, created a viral image with her seemingly sarcastic applause of the president a year ago. This time, she was even more explicit with her very text-ripping rebuke.

Trump appeared no more cordial. When he climbed to the House rostrum, he did not take her outstretched hand though it was not clear he had seen her gesture. Later, as Republicans often cheered, she remained in her seat, at times shaking her head at his remarks.

Full video of President Trump's 2020 State of the Union address

When Pelosi left, she told reporters that tearing up the speech was "the courteous thing to do considering the alternative." Republicans denounced her action as disrespectful.

Trump, the former reality TV star added a showbiz flavor to the staid event: He had wife Melania present the Presidential Medal of Freedom, the nation’s highest civilian honor, to the divisive conservative radio host Rush Limbaugh, who recently announced he has advanced lung cancer.

He stunned a young student in the gallery with a scholarship. And he orchestrated the surprise tearful reunion of a solider from overseas with his family in the balcony.

Even for a Trump-era news cycle that seems permanently set to hyper-speed, the breakneck pace of events dominating the first week of February offered a singular backdrop for the president's address.

Trump Calls for Bipartisanship, a Hard Line on Immigration in State of the Union

Supreme Court Chief Justice John Roberts, who has presided in the Senate over only the third impeachment trial in the nation’s history, was on hand again Tuesday night — this time in his more customary seat in the audience. Trump stood before the very lawmakers who have voted to remove him from office — and those who are expected to acquit him when the Senate trial comes to a close.

The leading Senate Democrats hoping to unseat him in November were off campaigning in New Hampshire. In advance of his address, Trump tweeted that the chaos in Iowa's Monday leadoff caucuses showed Democrats were incompetent and should not be trusted to run the government.

Among Trump's guests in the chamber: Venezuelan opposition leader Juan Guaidó, who has been trying to win face time with Trump, his most important international ally.

House Speaker Nancy Pelosi on Tuesday ripped up a copy of President Donald Trump's speech at the conclusion of the State of the Union address.

The president offered Guaidó exactly the sort of endorsement he’s been looking for as he struggles to oust President Nicolás Maduro from power. Trump called Guaidó "the true and legitimate president of Venezuela."

The president entered the evening on a roll, with his impeachment acquittal imminent, his job approval numbers ticking upward and Wall Street looking strong. He struck a largely optimistic tone Tuesday night, though even in past moments when Trump has struck a tone of bipartisanship and cooperation, he has consistently returned to harsher rhetoric within days.

Trump spent much of the speech highlighting the economy's strength, including low unemployment, stressing how it has helped blue-collar workers and the middle class, though the period of growth began under his predecessor, Barack Obama. And what Trump calls an unprecedented boom is, by many measures, not all that different from the solid economy he inherited from President Barack Obama. Economic growth was 2.3% in 2019, matching the average pace since the Great Recession ended a decade ago in the first year of Obama's eight-year presidency.

Trump stressed the new trade agreements he has negotiated, including his phase-one deal with China and the United States-Mexico-Canada agreement he signed last month.

While the White House said the president would have a message of unity, he also spent time on issues that have created great division and resonated with his political base. He attacked Democrats’ health care proposals for being too intrusive and again highlighted his signature issue — immigration — trumpeting the miles of border wall that have been constructed.

State of the Union 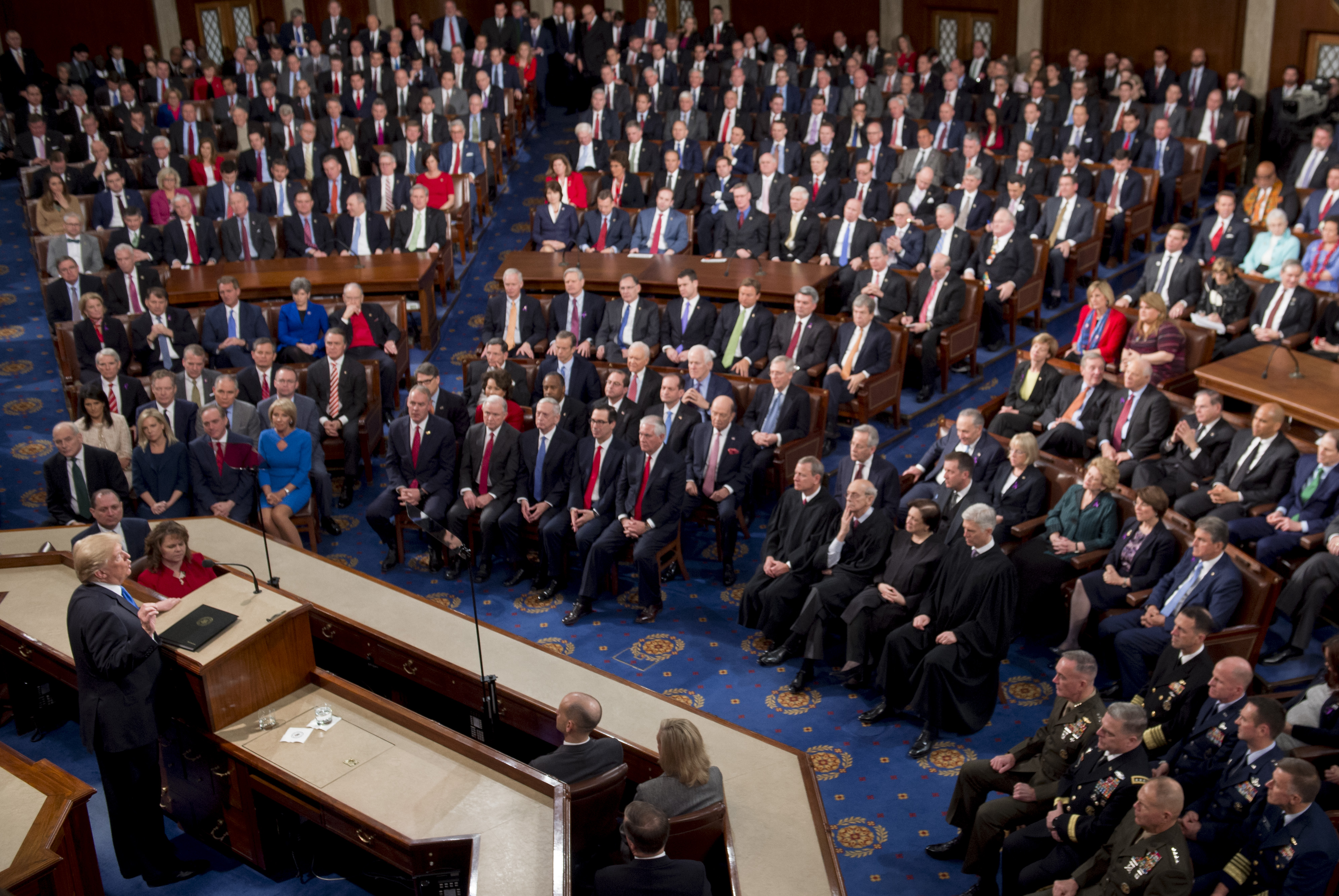 Polling: Americans Dissatisfied With the State of the Union

He also dedicated a section to "American values," discussing efforts to protect "religious liberties" and limit access to abortion as he continues to court the evangelical and conservative Christian voters who form a crucial part of his base.

The Democrats were supplying plenty of counter-programming, focusing on health care — the issue key to their takeover of the House last year. Trump, for his part, vowed to not allow a "socialist takeover of our health care system" a swipe at the Medicare For All proposal endorsed by some of his Democratic challengers.

Many female Democrats were wearing white as tribute to the suffragettes, while a number in the party were wearing red, white and blue-striped lapel pins to highlight climate change, saying Trump has rolled back environmental safeguards and given free rein to polluters.

Fred Guttenberg, a gun reform activist whose daughter Jamie was killed in a mass shooting at Marjory Stoneman Douglas High School in Parkland, Fla., was escorted out of the House chamber during the State of the Union address for speaking out amid Trump’s comments on protecting Second Amendment rights.

Several Democratic lawmakers, including California Rep. Maxine Waters and New York Rep. Alexandria Ocasio-Cortez, announced in advance of the speech that they would be skipping it while other Democrats walked out early.

Michigan Gov. Gretchen Whitmer delivered her party's official response and drew a contrast between actions taken by Democrats and the president's rhetoric.

"It doesn’t matter what the president says about the stock market," Whitmer said. "What matters is that millions of people struggle to get by or don’t have enough money at the end of the month after paying for transportation, student loans, or prescription drugs."

Donald TrumpimpeachmentState of the Union