RNC Night 3: Speakers Heap Praise on Trump as Crises Converge Across the US

The Republican National Convention continued on Wednesday, featuring a slate of speakers including Vice President Mike Pence, many of whom neglected to mention the immediate crises of Hurricane Laura, the ongoing coronavirus pandemic, California wildfires and the unrest in the wake of the police killings of Black men and women in cities across the country.

Here are some of the takeaways from the third night of the 2020 RNC.

Vice President Mike Pence accepted his nomination for a second term from Fort McHenry in Baltimore Harbor, in a speech praising Donald Trump's accomplishments but overstating the administration’s response to the coronavirus pandemic and its economic successes.

It was a speech designed around the national anthem, a reminder of Pence’s opposition to athletes taking a knee during the singing of the Star-Spangled Banner at sports events as a protest against racism.

On a night when the theme of the Republican National Convention was law and order, Pence did not name any of the Black Americans whose deaths by police officers have sparked the Black Lives Matter marches. He instead singled out a federal security officer, David Patrick Underwood, killed in Oakland, California, allegedly by a far-right "boogaloo" extremist seeking to undermine BLM protests to sow violence and disorder.

Pence said Trump had marshaled the full resources of the federal government to fight the virus and credited the limited ban on travel from China with saving lives.

"In our first three years, we built the greatest economy in the world," Pence said. "We made America great again. And then the coronavirus struck from China."

But Trump at first downplayed the danger the pandemic posed to the United States, predicted that it would disappear and when it did not, presided over a chaotic response that left hospitals scrambling to find protective gear and ventilations. The pandemic has killed more than 180,000 people in the United States.

The travel ban took effect on Feb. 2 but the first case of coronavirus in the United States was confirmed on Jan. 20. It also entered the country from Europe.

Pence claimed that the Democratic presidential nominee, former Vice President Joe Biden, presided over the slowest economic recovery since the Great Depression, but Trump inherited a strong economy from the Obama administration and the trend continued. The pandemic has had a disastrous effect on the economy and the millions of Americans are receiving unemployment checks.

The setting at Fort McHenry, where Francis Scott Key wrote the Star-Spangled Banner, brought to mind Pence dramatically leaving a football game between the Indianapolis Colts and the San Francisco 49ers in 2017 after some players knelt during the National Anthem, a practice started by Colin Kaepernick as a peaceful protest against racism and police brutality.

Pence said that the administration would provide law and order for Americans of every race, every creed and every color.

"Let me be clear: the violence must stop – whether in Minneapolis, Portland, or Kenosha," Pence said. "Too many heroes have died defending our freedoms to see Americans strike each other down." 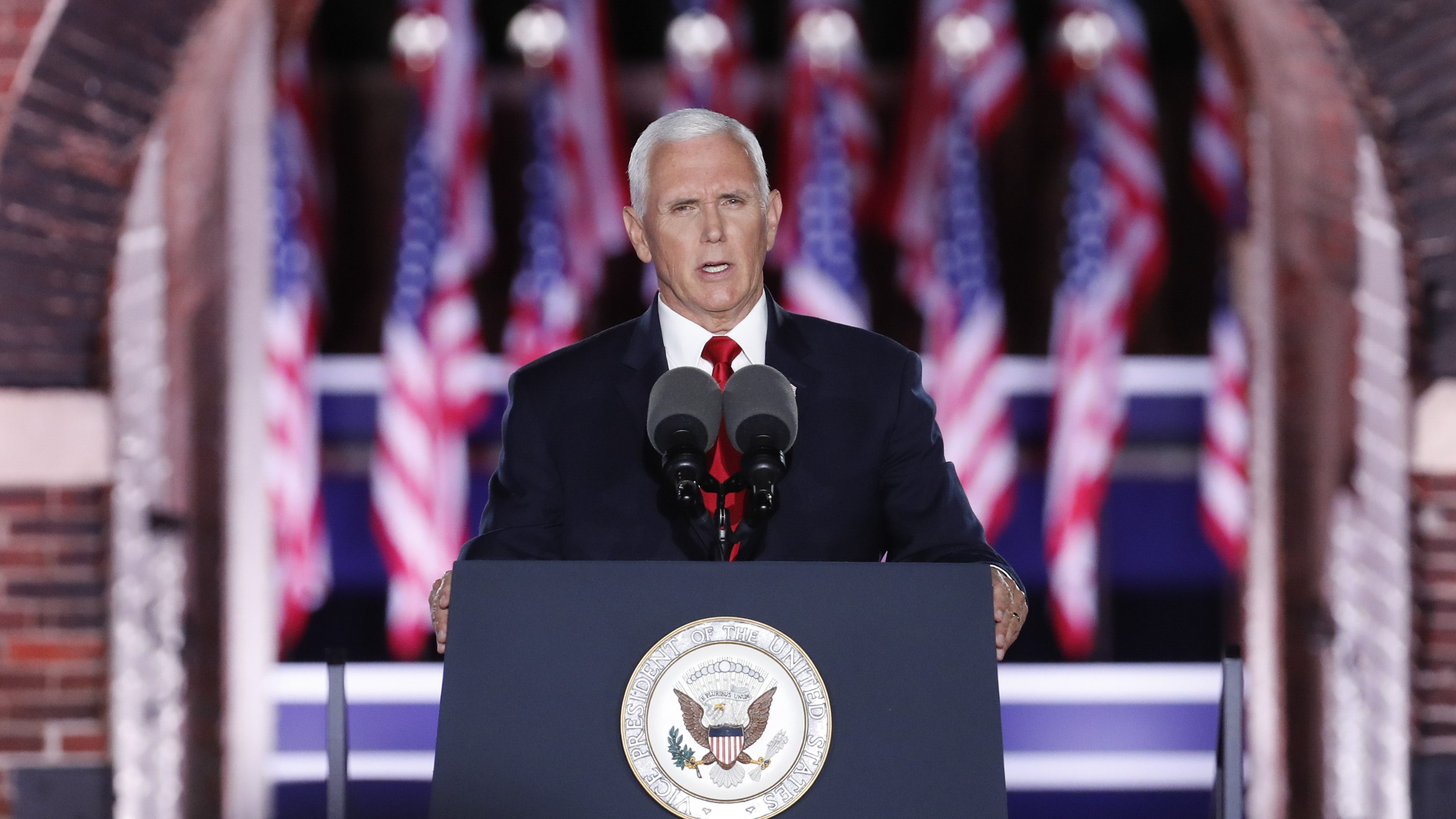 Republicans promoted "law and order" on the third night of their presidential nominating convention even as protests continued in Wisconsin, where police shot a Black man seven times in the back as he tried to get into his car and where a white armed 17-year-old old was charged with homicide after two people were killed during the demonstration.

The speeches Wednesday night took place against the backdrop of growing unrest over the shooting of Jacob Blake, whose family said was trying to de-escalate a domestic incident and who authorities said was near a knife in the car.

"The violence we are seeing in these and other cities isn’t happening by chance,” said Michael McHale, the president of the National Association of Police Organizations, which has endorsed Trump. “It’s the direct result of elected leaders refusing to allow law enforcement to protect our communities.”

The theme was evident from an opening video, replete with images of police officers, the military and firefighters responding to the World Trade Center after it was attacked by terrorists on Sept. 11, 2001. Sam Vigil, whose wife was shot to death in her driveway in Albuquerque, New Mexico, praised President Donald Trump for enabling the FBI to arrest five suspects in her killing, one of whom was an undocumented immigrant. South Dakota Gov. Kristi Noem claimed that cities run by Democrats, from Seattle and Portland to Washington and New York, were being overrun by violent mobs though protests against police brutality have been overwhelmingly peaceful, and she talked of chaos and murder though in Kenosha, Wisconsin, a 17-year-old was charged with homicide as two people were killed during the protests.

Like Noem, the Trump administration and campaign has characterized the protests as violent, though they have mostly not been, and though in Portland, most of the violence erupted after Trump sent in federal officers. The Milwaukee Bucks boycotted their playoff game in response, setting off a cascade of postponements in the National Basketball Association.

In a speech that closed out the convention's third night, Vice President Mike Pence said that “the American people know we don’t have to choose between supporting law enforcement and standing with African American neighbors to improve the quality of life in our cities and towns." He also assailed Democratic presidential nominee Joe Biden for saying there is an “implicit bias” against minorities and “systemic racism” in the U.S.

“The hard truth is ... you won’t be safe in Joe Biden’s America,” Pence said. “Let me be clear: The violence must stop – whether in Minneapolis, Portland, or Kenosha," he added. “Too many heroes have died defending our freedom to see Americans strike each other down.”

“The American people know we don’t have to choose between supporting law enforcement and standing with our African American neighbors to improve the quality of their lives, education, jobs and safety.”

Trump has yet to speak directly about Blake’s death. Democratic presidential nominee Joe Biden has condemned it while calling on protesters not to engage in violence.

Sen. Marsha Blackburn of Tennessee said leftists were trying to turn the heroes of law enforcement and the armed services into villains; law enforcement officers who, she said, put their lives on the line in spite of hate thrown at them.

“They want to cancel them,” she said. “But I’m here to tell you these heroes can’t be canceled.”

At the Republican National Convention, Vice President Mike Pence delivered a speech critical of the “violence and chaos” “engulfing” cities across the country in the wake of police killings of Black people. “We will have law and order on the streets of this country for every American of every race and creed and color,” said Pence.

“These achievements demonstrate that Donald Trump truly cares about Black lives," Henderson said. "His policies show his heart. He has done more for Black Americans in four years than Joe Biden has done in 50.”

Burgess Owens, a Black conservative running for a Utah congressional seat, decried civil unrest that’s followed some racial injustice protests and said America is at a crossroads in November.

“Mobs torch our cities while popular members of Congress promote the same socialism my father fought against in World War II,” he said.

Owens said he thinks America needs more leaders like President Trump who stand by their principles, won’t compromise and who “will stand up to the lawlessness supported by the radical left.”

Jack Brewer, a former professional football player and a member of Black Voices for Trump, argued that not liking Trump's tone was not enough to merit a vote for Biden. Brewer, the first person of color featured in the program more than an hour after it began, cheered Trump’s impact on the Black community and condemned what he called the “so-called Black Lives Matter movement.”

Richard Grenell, who served as U.S. Ambassador to Germany and acting Director of National Intelligence, claimed that through his stint as acting DNI he was privy to information about investigations by Democratic officials into possible “collusion” between the Trump campaign and Russia that "made me sick to my stomach.”

In his speech, Grenell also defended Trump's foreign policy record and the idea of nationalism.

"The Washington elites want you to think this kind of foreign policy is immoral. And so they call it 'nationalist,'" Grenell said. "That tells you all you need to know. The D.C. crowd thinks when they call Donald Trump a nationalist, they’re insulting him. As if the American president isn’t supposed to base foreign policy on America’s national interests."

Nationalism has been considered "a distasteful political platform for its association with the wars that destroyed significant parts of Europe," NBC News reported. But with his "America First" stance, Trump has embraced nationalism, at least in name.