Thursday Marks Deadline to Complete the 2020 Census and Be Counted

The deadline to be counted as part of the 2020 Census is now Thursday, Oct. 15, after the U.S. Supreme Court ruled Tuesday the Trump administration can halt the count.

CLICK HERE to fill out your census ahead of Thursday's deadline.

Residents can self-respond to the census online until 11:59 p.m. Hawaii Standard Time (HST), which gives those who live on the U.S. mainland until 5:59 a.m. ET on Friday, Oct. 16, to fill out their census. Paper census responses must be postmarked by Oct. 15. The deadline to respond to the census by telephone is also Oct. 15, but times vary. Click here for a schedule and list of phone numbers, including numbers for non-English speakers to respond in their native language.

Shortly after the Supreme Court's ruling, a text message went out to field supervisors in Northern California telling them to start collecting the iPhones their census takers use for gathering household information during their door-knocking.

It was the fifth time in two months that they were given a new end date for the head count of everyone living in the U.S.

The court's decision Tuesday was just the latest case of whiplash for the census, which has faced starts and stops from the pandemic, natural disasters and court rulings, as well as confusion over when it was going to end and questions over whether minorities, immigrants, poor people and others would be counted accurately.

Minority groups have historically been undercounted in the once-a-decade census that determines how many congressional seats each state gets, as well as how $1.5 trillion in federal spending is distributed each year, and advocates said the two-week-shorter schedule will make that even worse.

“The Trump administration is acting out of fear. They fear a future America where we are majority minority. They don’t want to see the power shift,” Meeta Anand, a fellow at the New York Immigration Coalition, said Wednesday. “They will ignore the rules. They will do everything they can to make sure the true nature of our society is not reflected.” 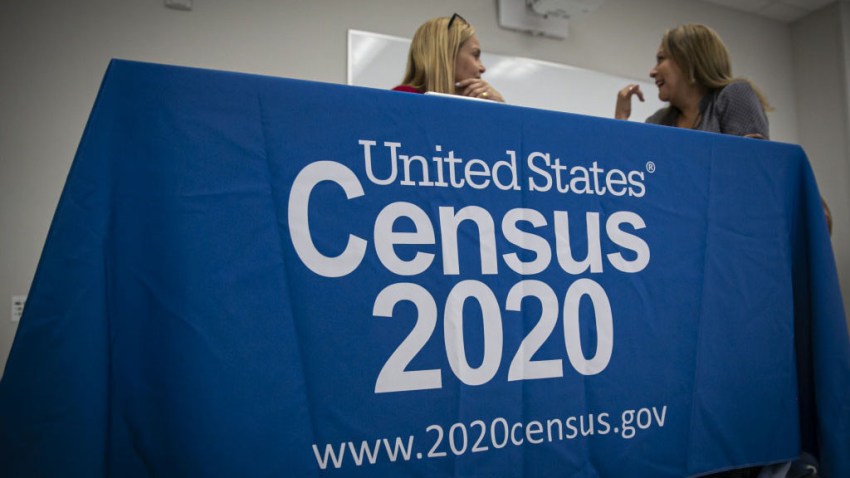 Trump, Biden Go at It — From a Distance — in Town Halls

The Trump administration had argued that the head count needed to end immediately to give the Census Bureau time to meet a congressionally mandated Dec. 31 deadline for completing the figures that will be used to apportion House seats.

A coalition of local governments and advocacy groups had sued to keep the census going through October, saying that minorities and others would be missed if the census ended early.

By sticking to the Dec. 31 deadline, the Trump administration would end up controlling the numbers used for the apportionment, no matter who wins next month’s presidential election. Opponents fear the administration will depart from past practice and leave out of the count people who are in the U.S. illegally.

The nation’s highest court didn’t offer a reason for ending the census, though Justice Sonia Sotomayor said in a dissent that minorities and others “will disproportionately bear the burden of any inaccuracies."

The end date for the 2020 census has been a moving target since the pandemic temporarily halted field operations last spring.

The Census Bureau pushed an end-of-July deadline for concluding the count to the end of October because of the virus. But the Commerce Department, which oversees the agency, decided to move up the deadline to late September, then early October, and was thwarted both times by a federal judge in California.

The constantly fluctuating deadline probably affected the quality of the data gathered, since census takers were more likely to rely on administrative records or neighbors instead of making an extra visit to a household if they were under the gun to end the count, Minnesota State Demographer Susan Brower said.

The 2020 U.S. Census is required for anyone living in the United States, but there are billions of reasons you'd want to take it: lawmakers use census data to divvy up money for important resources like hospitals, fire stations and roads. Lawmakers will rely on this year's census data until 2030, so now's your chance to make sure your household is counted where it counts the most!

Many census takers have said they hadn’t been given work since the beginning of the month, with little explanation, even though they had been planning to work through the end of October.

In recent weeks, "the census operation has been in a holding pattern,” Brower said. “They didn’t say, ‘Great! More time. Let’s go back and revisit some of those things we’ve already done.’ The attitude was more, ‘What’s done is done, and we will put our energy toward closing cases.’”

Brower said she is more concerned about whether Census Bureau statisticians can process the data accurately by Dec. 31, in less than three months, when they originally had five months to do it.

“My interpretation is it cannot be done in that amount of time," she said..

Whether that Dec. 31 deadline holds is still being decided in the courts.

The data processing phase takes time since the statisticians must remove duplicate answers, fill in information gaps by using records and check for quality, said Thomas Saenz, president and general counsel for the Mexican American Legal Defense and Education Fund.

Losing two weeks of the count is going to be felt in New York City, where activists since the start of the month had held 100 events to get people to fill out the census form, and “every single day we were moving the numbers upward," said Julie Menin, director of NYC Census 2020.

“We could have done so much more. Paid canvassing. Advertising. Phone banking. Texting," Menin said. “To lose those two weeks is unconscionable."