There Is Still Madness in the NCAAs, It's Just a Bit Quieter

This March, things are just a little quieter

No bands. No cheer squads. No packed buildings filled with neutral fans suddenly throwing their support behind a plucky double-digit underdog hoping to pull off an upset.

The games during the first week of the NCAA Tournament have still brought madness — see: Oral Roberts, North Texas, Ohio and Abilene Christian — but it’s a much different version than the past.

Yet despite the restrictions, despite the lack of fans with venue capacity capped at 22 % and despite teams being walled off from friends and family — the joy is still there. The fabric of March will always include upsets and big shots and they have come aplenty already.

This March, things are just a little quieter.

NCAA Vice President of Women's Basketball Lynn Holzman has apologized after a video on social media showed the small stack of weights provided to the women's teams in San Antonio in comparison to the spacious weight room for the men's teams in Indianapolis.

“We played most of the year with little or no fans. I think that atmosphere, that part of the experience for the student-athletes is noticeably missing,” Wisconsin coach Greg Gard said. “So when you add just a few into the crowd, that makes a difference. That adds life to the building.”

One of the hallmarks of NCAA Tournaments of the past is the atmosphere. The crowded arenas mixed between traveling diehards and neutral locals. The downtowns overflowing with visitors, the costumes and painted faces. Villanova's crying piccolo girl and more.

There is still some of that in Indianapolis this year. But it’s on a far smaller scale and the line of delineation is obvious. Police vehicles and metal barricades surround parts of downtown around the hotel bubble where tournament teams are being housed. Skyways these use to walk to practices are closed off.

The meaning is clear. Family, friends and fans are on the outside looking in.

The 2021 Division 1 Men’s Basketball Championship will be played entirely within Indiana. The tournament known as “March Madness” was canceled last year due to the pandemic.

“I haven’t seen my wife or my kids in over a week now, so I’ve obviously miss them terribly. I wave at my wife out of the hotel window every day since she got here,” Abilene Christian coach Joe Golding said after the 14th-seeded Wildcats stunned No. 3 seed Texas. “That’s the tough part about being here. I wish I could celebrate with them because she’s the rock of the family.”

Fans are still here. The orange of Syracuse, Illinois and Oregon State still pop in a crowd. The Hogs were definitely being called at local establishments after Arkansas’ opening victory.

Supporters of Baylor and Gonzaga have shown up expecting long stays. Illinois fans did as well, only to get bounced in the second round by Loyola Chicago. The Mean Green of North Texas, Golden Eagles of Oral Roberts and Golding’s Wildcats are sticking around longer than most anybody thought.

But it’s different. It was going to have to be different to function inside of a bubble and that’s translated to an atmosphere that’s not library quiet, but not a rocking madhouse either.

Still, the players are taking notice of the noise that is there.

With 68 teams competing in the NCAA men’s tournament, anyone who says they can predict the Final Four is a liar. So says ESPN's Stephen A. Smith, who mixed it up with LX News host Ashley Holt about his March Madness favorites and his action figure, Mini Stephen A.

“The game yesterday was fun,” Maryland's Darryl Morsell said Sunday, emphasizing the last word after its first round win over UConn. “You know, half the building was Maryland, half the building was UConn. When UConn was making their little run, their fans getting loud. Our fans trying to pick us up, cheer us on. It was great. It felt like a packed house like a real game. I loved it. That’s what we’re all here for.”

The NCAA has given nods to each school participating, whether its the fight songs playing when the teams take the floor, or videoed performances of each school’s cheer squads being played at halftime.

The national anthem? It’s a recording. Coaches' instructions and criticisms often are clearly heard during games. And don’t expect crowd noise to rattle any free throws in the final seconds.

“You’re used to running out for the most part to packed houses. Obviously that’s different. I think we’re grateful the fact that there are fans here,” Illinois coach Brad Underwood said after its first-round win. “But it’s a little different feel. Once the ball is thrown up, the game is the game, and it is different that way. But I’m just ecstatic that we’re playing. Our players are ecstatic we’re playing. There’s going to be a champion.”

It’s not all stale atmospheres and library-quiet venues. Georgia Tech students roared inside Hinkle Fieldhouse until getting silenced by Loyola Chicago. Same with the hundreds of Grand Canyon students — known as Havocs — who were on hand for the first round matchup against Iowa. 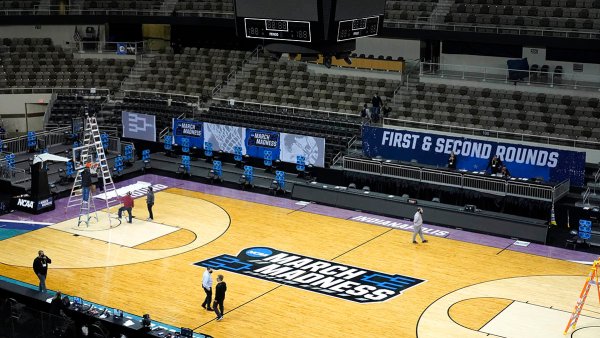 Coronavirus Doesn't Care That It's the NCAA Tournament 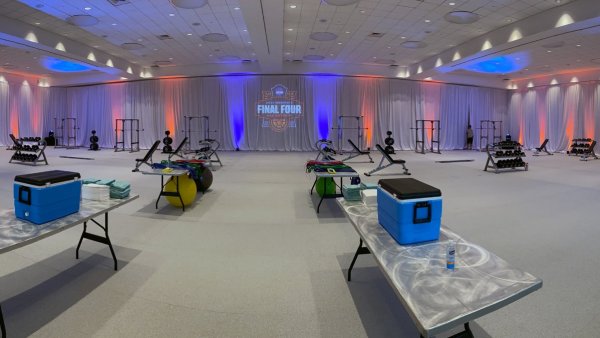 Chants of “R-U” echoed through Bankers Life Fieldhouse as Rutgers won its first tournament game since 1983. Abilene Christian fans had Lucas Oil Stadium rocking well after midnight enjoying its upset of the flagship school in its home state.

For the guys at North Texas, who pulled one of the big first-round upsets by knocking out No. 4 seed Purdue, they loved the hostile feel of having most of Lucas Oil Stadium against them.

For the Mean Green, it definitely felt like March.

“We’re doing something we love to do, playing basketball. Yeah, I want to experience the crowd, the sellout,” North Texas star Javion Hamet said. “But it still was loud in there (Friday) night. It felt like 10- or 20,000 fans in there when Purdue went on a run. No, I don’t feel like we’re being shortchanged.”

Added North Texas coach Grant McCasland, “We were playing a team from Indiana, the only team from Indiana in the tournament, in Indianapolis and I thought it was a pretty good atmosphere considering. Our guys loved it, man. It was a blast.”