Eta is forecast to become a hurricane when it moves over the southeastern Gulf of Mexico.

Eta struck Lower Matecumbe Key at around 11 p.m. Sunday with maximum sustained winds of 65 mph. Eta is currently 45 miles north-northwest of Key West and 65 miles south of Naples and is moving west-northwest at 13 mph, according to the latest advisory from the National Hurricane Center.

WATCH LIVE: First Alert Doppler 6000 is in player above.

Eta was just off the coast of southwest Florida on early Monday. A tropical storm watch was upgraded to a tropical storm warning for the Florida west coast from Englewood to Anna Maria Island.

A tropical storm warning continued to be in effect for the Florida coast from Brevard/Volusia County line to Anna Maria.

A flash flood warning is in effect for Miami-Dade, Broward and Monroe counties and will continue into early Monday morning. A flood warning was also in effect.

Eta is expected to bring storm surge between 2 to 4 feet and 6 to 12 inches of rain across South Florida, with isolated maximum storm totals of 18 inches. Tropical-storm-force winds will extend outward up to 310 miles from the center of the storm. 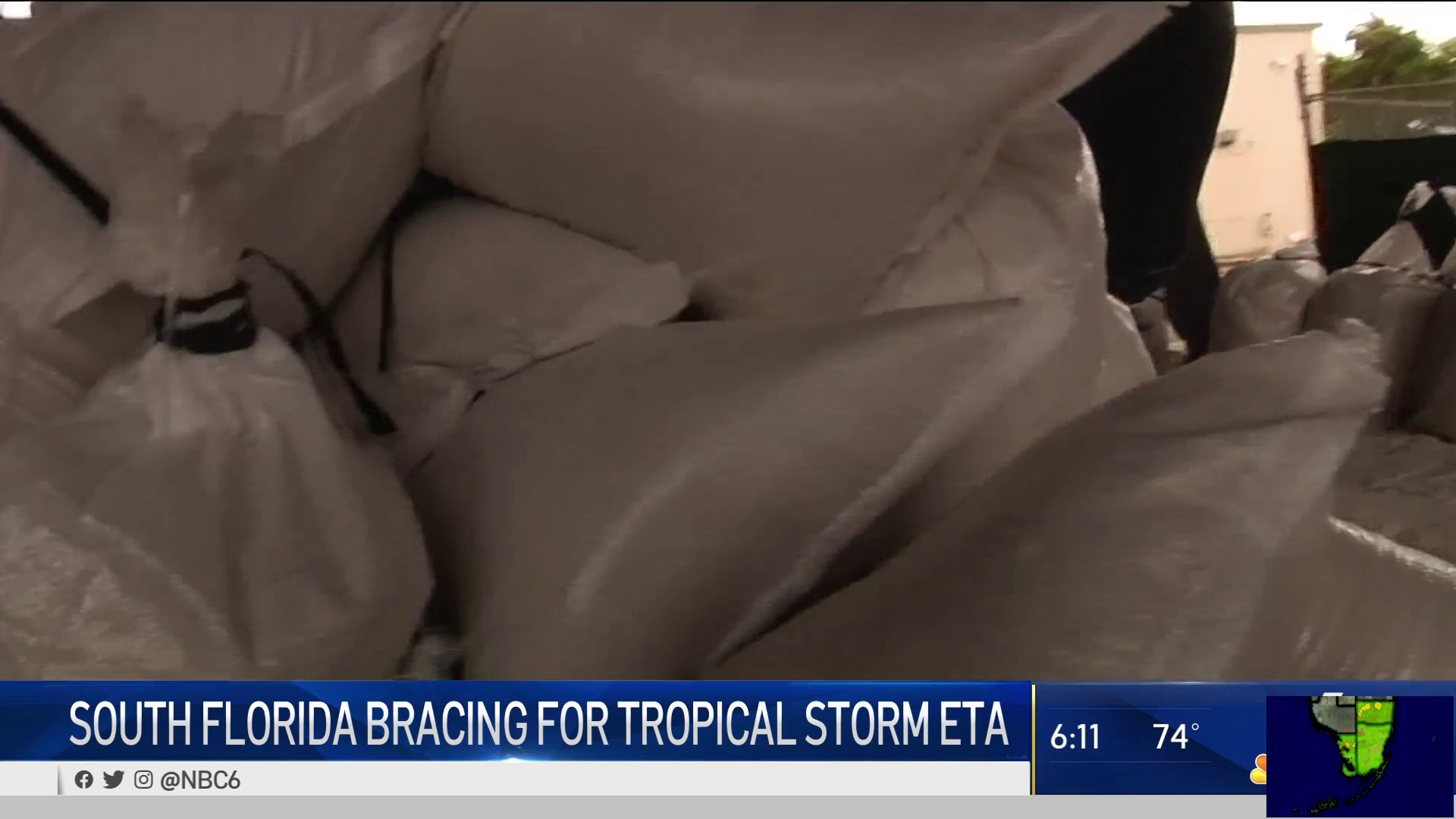 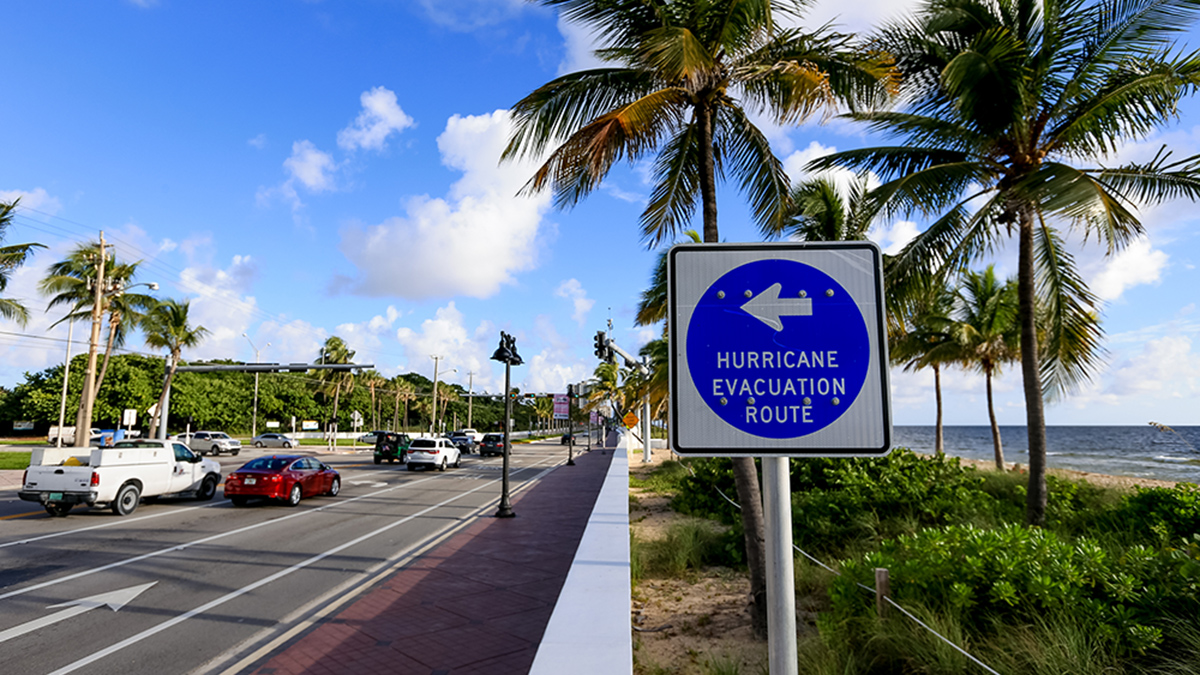 Florida Gov. Ron DeSantis declared a state of emergency Saturday for eight counties at the end of the state as Eta approached, urging residents to stock up on supplies. South Florida started emptying ports and a small number of shelters opened in Miami and the Florida Keys for residents in mobile homes and low lying areas.

Miami-Dade County declared a state of emergency Friday night and opened its evacuation center Saturday at the fairgrounds located at 10901 Coral Way, Gate 2 for residents who may need refuge. For more information on shelters, click here.

NBC 6's Kristin Sanchez is in Fort Lauderdale at one of several areas dealing with issues after the storm's weekend arrival.

The South Florida Water Management District said they were lowering canals and staffing pump stations and control rooms as they watch the forecast. They advised residents to secure any loose items that could clog storm drains or swales.

Further south in the Keys, officials were monitoring the storm closely, but had no plans to evacuate tourists or residents. They urged residents to secure their boats and encouraged visitors to consider altering plans until Eta had passed.

The storm swelled rivers and flooded coastal zones in Cuba, where 25,000 had been evacuated. But there were no reports of deaths. Authorities in Guatemala on Sunday raised the known death toll there to 27 from 15 and said more than 100 were missing, many of them in the landslide in San Cristobal Verapaz.

Local officials in Honduras reported 21 dead, though the national disaster agency had confirmed only eight.

Eta initially hit Nicaragua as a Category 4 hurricane, and authorities from Panama to Mexico were still surveying the damages following days of torrential rains during the week.

In Guatemala, search teams first had to overcome multiple landslides and deep mud just to reach the site where officials have estimated some 150 homes were devastated.

In the worst-hit village, Quejá, at least five bodies have been pulled from the mud. The Indigenous community of about 1,200 residents consisted of simple homes of wood and tin roofs clinging to the mountainside.

NBC 6's Carolina Peguero is at the scene in Little Haiti after Tropical Storm Eta caused chaos for one family that was able to make it out of their home alive late Sunday night.

Rescue workers used a helicopter to evacuate survivor Emilio Caal, who said he lost as many as 40 family members and relatives. Caal, 65, suffered a dislocated shoulder when the landslide sent rocks, trees and earth hurtling onto the home where he was about to sit down to lunch with his wife and grandchildren. Caal said he was blown several yards (meters) by the force of the slide, and that none of the others were able to get out.

“My wife is dead, my grandchildren are dead,” said Caal from a nearby hospital.

Firefighters’ spokesman Ruben Tellez said at least one additional person died in Guatemala on Sunday when a small plane went down while carrying emergency supplies to the stricken area.

In southern Mexico, across the border from Guatemala, 20 people died as heavy rains attributed to Eta caused mudslides and swelled streams and rivers, according to Chiapas state civil defense official Elías Morales Rodríguez.

The worst incident in Mexico occurred in the mountain township of Chenalho, where 10 people were swept away by a rain-swollen stream; their bodies were later found downstream.

Flooding in the neighboring state of Tabasco was so bad that President Andrés Manuel López Obrador cut short a trip to western Mexico and was flying to Tabasco, his home state, to oversee relief efforts.

Hurricane Eta’s arrival in northeast Nicaragua Tuesday followed days of drenching rain as it crawled toward shore. Its slow, meandering path north through Honduras pushed rivers over their banks.

NBC 6's Arlene Borenstein is in Marathon, where the brunt of the storm impacted areas that are still recovering from Hurricane Irma over three years ago.

Aside from Eta, there were two other areas of development that have medium chances of developing into tropical cyclones this week -- one in the middle of the Atlantic and an area over the central Caribbean Sea.