Torrential rain from Tropical Storm Eta caused dangerous flooding across South Florida's most densely populated urban areas on Monday after it made landfall in the Florida Keys. Cars were stranded and entire neighborhoods were swamped as flash floods rose in areas where the water had no place to drain.

The system’s wide reach and heavy rains posed a serious threat across South Florida, an area already drenched from more than 14 inches of rain last month. Eta could dump an additional 6 to 12 inches, forecasters had said.

“It was far worse than we could’ve ever imagined, and we were prepared," said Arbie Walker, a 27-year-old student who had to slosh through water covering his apartment's floors in Fort Lauderdale.

“It’s been pretty much nonstop rain since yesterday. There’s 5-6 inches of rain in our apartment right now. It took us 20 minutes to navigate out of our neighborhood due to the heavy flooding in our area,” Walker added. Flood waters also submerged half of his sister’s car.

Meteorologist Ryan Phillips has the latest on Tropical Storm Eta.

Eta’s center hit land late Sunday as it blew over Lower Matecumbe, in the middle of the chain of small islands that form the Florida Keys. It was moving into the Gulf of Mexico Monday evening with maximum sustained winds of 50 mph, according to the latest update from the National Hurricane Center in Miami. It was about 180 miles southwest of the Dry Tortugas, moving southwest at 9 mph.

Forecasters initially said it could re-intensify into a minimal hurricane as it slowly moves up the southwest Gulf Coast, centered just far enough offshore to maintain its strength while dumping vast amounts of water across the lower third of the Florida peninsula. But on Monday, forecasters had it remaining a tropical storm before becoming a depression over the Gulf.

“Once the ground becomes saturated, there’s really no place for the water to go,” Trantalis said. “It’s not like a major hurricane. It’s more of a rain event, and we’re just doing our best to ensure that the people in our community are being protected.”

City officials dispatched some 24 tanker trucks with giant vacuums to soak up water from the past few weeks. Some older neighborhoods simply don’t have any drainage. The city passed out 6,000 sandbags to worried residents over the weekend but water seeped into homes and stranded cars in parking lots and along roadways.

Randi Barry, 36, also woke up Monday to flooded streets outside her home in Fort Lauderdale, and joined her neighbors in helping people whose cars were stuck in high water.

“There are a lot of people with their doors open, getting furniture up to higher ground and trying to get water out of their homes,” said Barry said. “Everyone is helping each other out a lot,” she said. “Floridians are really resilient.” 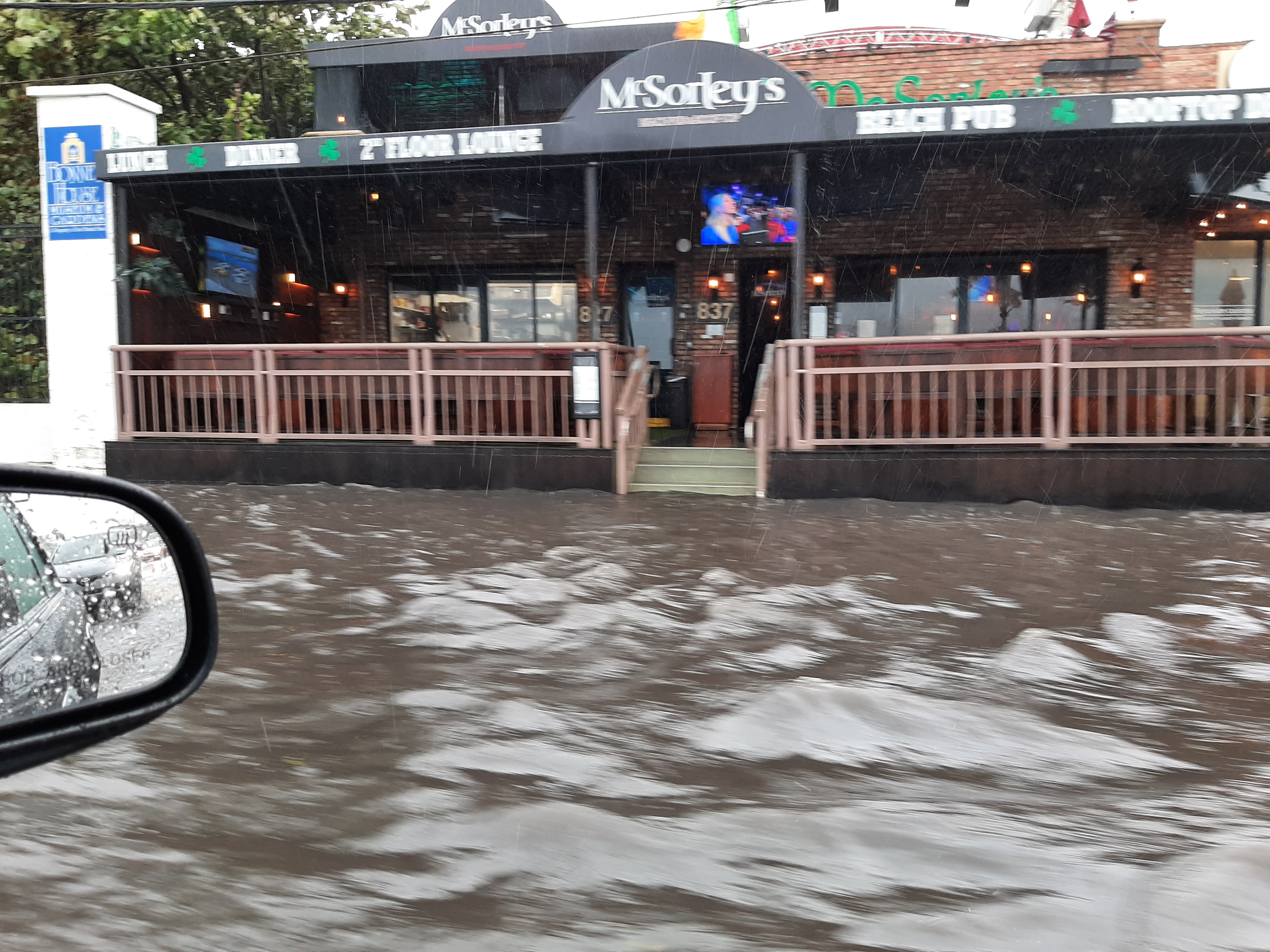 Tropical Storm Eta Through the Lens of NBC 6 Viewers 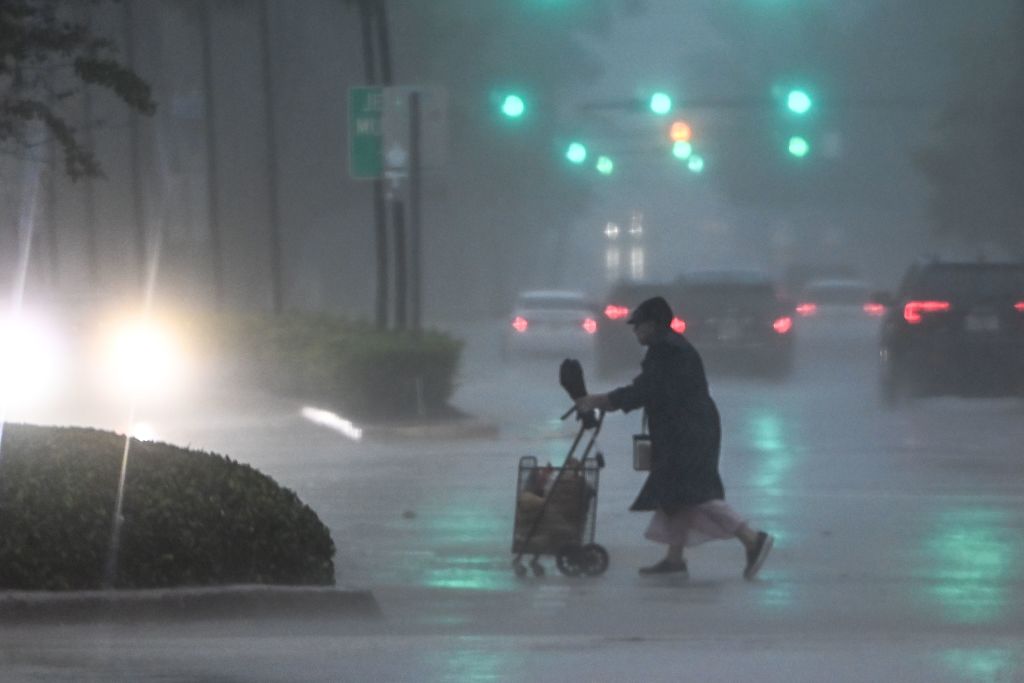 Miami-Dade County Mayor Carlos Gimenez said he was in frequent contact with county water officials about the struggle to drain the flooded waters, which has stalled vehicles, washed over intersections and crept into some homes.

“In some areas, the water isn’t pumping out as fast as it’s coming in,” warned Miami-Dade Commissioner Jose “Pepe” Diaz.

Firefighters pulled a person from a car that had driven into a canal Sunday night in Lauderhill. The patient was hospitalized in critical condition, according to a statement from Lauderhill Fire.

NBC 6 has team coverage after the tropical storm made landfall late Sunday night while Miami's mayor spoke with the media about flooding and power outages in the area.

In the Florida Keys, the mayor ordered mandatory evacuations for mobile home parks, campgrounds and RV parks and those in low-lying areas. School districts closed, saying the roads were already too flooded and the winds could be too gusty for buses to transport students. But the islands were spared any major damage, and officials expected shelters to close and schools to reopen by Tuesday.

Eta also wasn't done yet with Cuba, just 90 miles south of Florida, where the storm continued to swell rivers and flood coastal zones on Monday. Some 25,000 people were evacuated with no reports of deaths, but rainfall continued, with total accumulations of up to 25 inches predicted.

Eta initially hit Nicaragua as a Category 4 hurricane and wreaked havoc from Mexico to Panama. Authorities were still surveying the damage Monday after days of torrential rain. Official death tolls totaled at least 68 people, but hundreds more were missing and many thousands were in shelters after flash floods tore through communities of improvised homes on unstable mountainsides.

Tropical Storm Eta made landfall north of Tampa Bay on Thursday morning. The storm hit the Florida Keys and southern Florida earlier in the week.