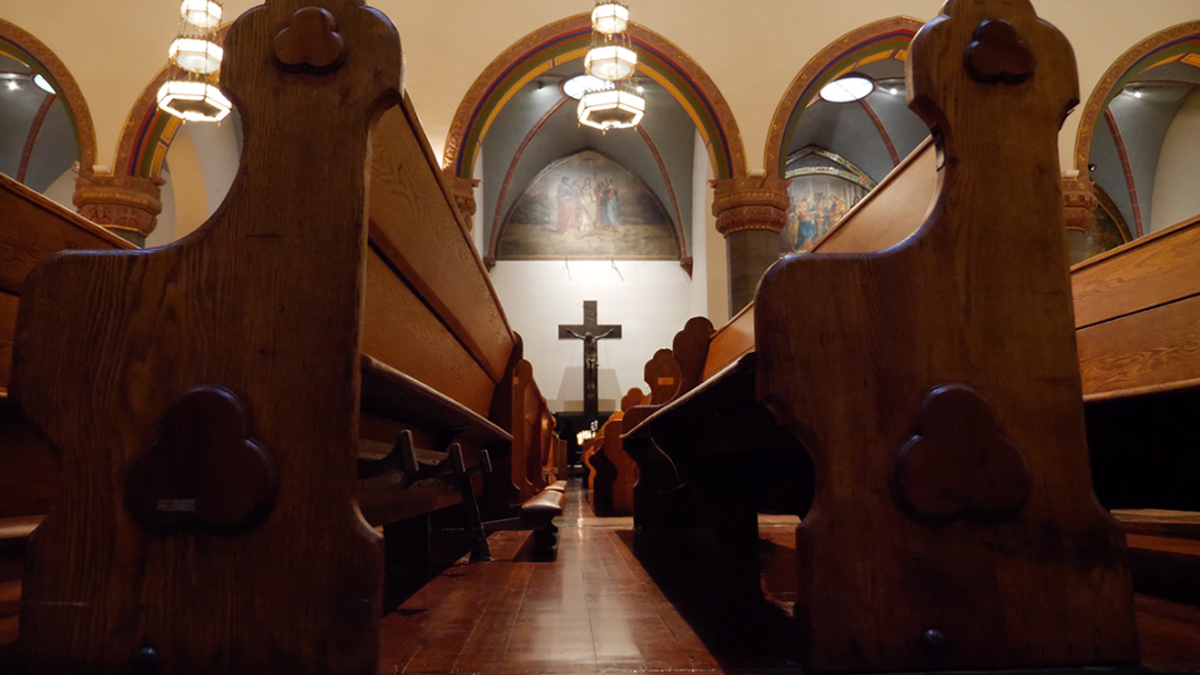 A vast survey of the Roman Catholic Church workforce in America shows the people who know best how the church is run – the employees themselves – are deeply split on key issues facing parishes across nation. The survey reveals diocesan priests are far more likely to view clergy abuse as a problem of the past, while nuns and other religious employees often consider sex abuse and misconduct to be major problems even today. And just as Pope Francis considers expanding the role of married men and women in the church, the survey highlights vivid differences in how female and male employees view a host of religious reforms under the Vatican’s consideration.

According to a poll, one in three employees of the Catholic Church say sex abuse or misconduct is “still a major problem” inside the church, including more than half of nuns polled. More than half of diocesan priests and three out of four nuns would not allow a child family member to go on an overnight retreat supervised by a...

NBC Owned Television stations around the nation distributed the survey to more than 32,000 employees listed in the Official Catholic Directory. 2,700 members of the church workforce responded (see methodology here), including nearly 500 priests and deacons, more than 280 religious sisters and brothers, along with nearly 1,900 lay employees – everyone from educators to administrative staff. Among the survey’s most striking findings are:

Bill Donohue, president of the Catholic League, a nonprofit that defends the church in the media, said the NBC survey results show employees are falsely conflating old headlines with modern behavior.

“This is a result of the poisoning of the public mind,” Donohue said. “Most of the bad guys, most of the priests who molested, are either dead or they’re out of ministry. That’s not an opinion, that’s a fact.”

The NBC survey was unweighted and, because employees chose whether or not to participate, results could be skewed by what’s known as self-selection bias. NBC Owned Television stations consulted with Georgetown University’s Center for Applied Research in the Apostolate (CARA) to help build the survey methodology and formulate questions.

“I think it’s actually a good portrait of where the church is now,” Gray said. “I call it the longest surviving feudal institution in the world. It’s very resistant to change, as are, I think, some people working in it. The [survey] results, I think, bear that out.”

The NBC survey was anonymous. Employees self-reported their occupational roles in the church and the state in which they work. They were also given the chance to write anonymous comments, many of which involved the clergy abuse scandal and the leadership by the bishops.

NBC Owned TV Stations reached out to the U.S. Conference of Catholic Bishops for comment on the survey findings, but received no response.

Requests by NBC 6 to interview Thomas Wenski, archbishop of the Miami Archdiocese, or his designee about the survey and the archdiocese’s policy on revealing the names of priests accused of sexual abuse were declined by the archdiocese.

Asked by email why the Miami Archdiocese does not publish those names on its website, as most other United States dioceses do, a spokeswoman would only say all cases are reported to the State Attorneys’ offices and are public record.

A vast survey of the Roman Catholic Church workforce in America shows the people who know best how the church is run – the employees themselves – are deeply split on key issues facing parishes across the nation.

While an overwhelming majority of Catholic Church employees, more than 81 percent, believe their particular parish or organization has properly handled the clergy abuse scandal, there is a significant group of workers who still harbor mistrust for at least one of their current colleagues. When employees were asked if they would allow a child in their family to go on an overnight retreat supervised by a clergy member or person of trust in their parish or organization, about half of respondents said there is at least one chaperone with whom they would not feel comfortable.

Priests who took the survey were most likely to express unconditional confidence in church chaperones, with 48% of diocesan priests and 54% of religious order priests saying “yes” they would allow a child in their family to spend the night with clergy or another parish person of trust.

Conversely, nuns who took the survey harbored the most mistrust of their colleagues, with more than 74% saying there’s at least one chaperone they would not trust with a child overnight.

Michael Pfau, an attorney who represents clergy abuse plaintiffs across the country, said the question about overnight retreats is particularly revealing.

“The survey is interesting because it’s clear that Catholic employees still feel there’s a problem, still would not trust their own children on overnights with priests. That tells me there is a problem.”

While about half of the employees polled continue to harbor mistrust for select clergy and parish leaders, the NBC survey shows Catholic workers have unified concern about the media’s portrayal of the clergy abuse scandal. When asked if they think media coverage of the sex abuse scandal has been mostly fair, 64% of respondents said no. Diocesan priests were most likely to fault the media for unfair coverage, with 79% saying the media has been mostly unfair in its coverage of the clergy scandal.

Despite those misgivings about the media, Catholic employees do seem to trust victims of clergy abuse, whose stories the media reveal. An overwhelming 81% of respondents said people who file sex abuse lawsuits against the church are mostly or usually telling the truth.

Beyond the sex abuse scandal, employees of the American Catholic Church weighed in on a variety of proposed changes to Vatican policies. Just last month, Pope Francis held a three-week gathering of bishops, called a synod, to consider whether priest shortages in the Amazon region of South America might be reduced by allowing married men to help minister to remote populations in the vast, often unserved area. A majority of the participating bishops voted to allow the ordination of married men for that purpose.

Almost two thirds of the surveyed employees, about 65%, were open to the idea of ordaining more married men as priests. The Vatican already allows a limited number of pastors, who were previously married in other Christian denominations, to be ordained Catholic priests.

“The main function of a priest is to take the place of Christ, particularly at the Mass, when reenacting, as it were, the occurrences of the Last Supper,” Sullins said. “It makes sense for that person to be as Christ-like as possible. And that’s why priests are male.”

Most of the church employees who took the survey, about 58%, tended to agree with Sullins that women should not be ordained priests. But respondents were far more receptive to the idea of ordaining female deacons. Nearly 60% said ordaining women to the deaconate is an idea that deserves more consideration.

Not surprisingly, the divide on women’s ordination is most stark when comparing diocesan priests to nuns. While just under a quarter of the surveyed diocesan priests said they are open to ordaining female priests, more than 71% of nuns who answered the survey said the Vatican should give more consideration to the idea.

The question of birth control – another historically polarizing subject for practicing Catholics – appears to be just as polarizing for the church’s workforce. Again, the disagreement can be traced along gender lines. When asked about the idea of allowing birth control, 53% of the church employees who answered said they are open to the idea. But most male respondents oppose the idea.

“Only one in 10 respondents [in the NBC survey] was a male lay Catholic as opposed to over half of your respondents [who] were female lay Catholics,” Sullins said. “If you’ve gotten a small percentage back from the population that you’re sampling, then you really don’t know how representative they are.”

Because employees chose for themselves whether or not to participate in the NBC survey, it is possible certain demographic groups are over- or underrepresented in the results. But Mark Gray said the Official Catholic Directory – which was used to send out the survey – is representative of the Catholic workforce in America.

“It’s pretty much where everyone starts for surveys of the church,” Gray said. He also said one would expect more women to respond to the survey, because women make up the majority of Catholic Church employees.

“The typical person working in an American parish is a college-educated woman age 50 or older,” Gray said.

Employees Overwhelmingly Believe Teachings of the Church are Consistent with Jesus

Despite sharp division on the role of women, social issues and possible reforms, the Catholic Church workforce is united in one belief: that the church and its pope are largely doing the work of Jesus Christ. The NBC survey found 86% of respondents answered “yes” when asked if they believe the teachings of the Catholic Church are mostly consistent with Jesus’s teaching.

“I’m actually glad to see that we can do a survey like this and put concrete data on something that I might have guessed,” Dwyer said. “It’s nice to see data that those who are most closely associated and work for the church and volunteer all of their time still are passionate about what they do, the role they play.”

Robin Klueber, director of religious education at New York City’s Church of the Ascension, said she left a job on Wall Street to find higher meaning, and she found that meaning as a lay employee of the Catholic Church.

“I don’t have to have designer bags and I don’t need to have diamond jewelry. I have been making a difference in so many peoples’ lives,” Klueber said. “I can’t do anything about the clergy sexual abuse situation, but what I can do is I can do the ministry of Jesus and I can teach children to do that ministry. And I can change the world one kid at a time.”

Klueber, along with most of those who took the NBC survey, also credited Pope Francis with some of their inspiration.

The NBC survey found large majorities of church employees agree with the pontiff’s words about immigrants, the environment and free market capitalism. The results also show hundreds of employees would like to see their local diocese more vocal about social issues. When asked which issues church leaders should speak out more on, the top answers were poverty (51%) , threats to religious liberty (50%), and the poor treatment of migrants (49%).

The NBC Survey of Catholic employees was intentionally brief, just 26 questions. But the final question was open-ended, allowing priests, deacons, nuns, religious brothers and lay employees an opportunity to write about any topic they think the public should be aware of. Those responses yielded more than 1,600 of the most sincere and personal perspectives on the Catholic Church in America. Most of the comments reflected a workforce aware of the church’s imperfections, but committed to make the world a better place through religious service.

This 26-question unweighted survey was conducted using Survey Monkey between the dates of Oct. 18, 2019 and Nov. 14, 2019. Survey forms were sent via email to 32,616 email addresses listed in the Official Catholic Directory. A total of 2,700 responses were returned, resulting in an 8.3% response rate. Survey Monkey calculates the survey’s margin of error +/- 2% at a 95% confidence interval. All sample surveys and polls are subject to multiple sources of error including self-selection bias and error associated with the wording of questions.