Officer Yandy Chirino was shot during an altercation with an 18-year-old suspect on Oct. 17

Law enforcement from around South Florida and across the country gathered Monday to honor the life of a Hollywood Police Department officer killed in the line of duty last month.

The funeral procession for Officer Yandy Chirino left the Vista Memorial Gardens Cemetery funeral home around 8:30 a.m. Monday, heading to the FLA Live Arena in Sunrise for a 10 a.m. service.

Chirino, 28, spent four years with the Hollywood Police Department and was a native of South Florida.

"Yandy was more than just an officer, he was a true hero," said Hollywood Chief of Police Christoper O'Brien at the memorial service. "He sacrificed his life protecting his community." 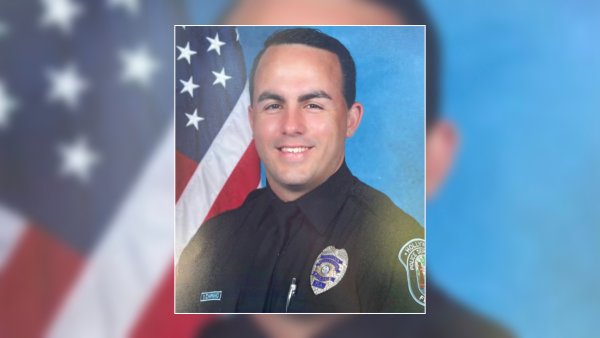 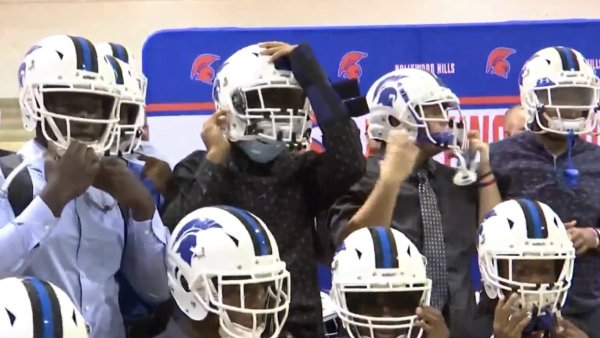 Chirino received several commendations during his time at the department, including an officer of the month honor.

"Rest in peace, brother, we'll take it from here," O'Brien said, vowing to Chirino's loved ones that the department will always honor the young officer's legacy.

Chelsea Howell, Chirino's girlfriend for the past two and a half years, recalled first meeting Chirino during a night shift at Memorial Regional Hospital, where she works as a nurse.

"He was working a detail the night I met him, and was dealing with a Baker Act that was my patient. He told him: 'Bro, calm down, that's your nurse, she's the most beautiful girl here,'" Howell recalled.

Howell remembered the fallen Hollywood cop as someone with great humor, strength, and someone who put his life on the line every day for the betterment of the community.

"I loved you then, I love you now, always did and always will," she said. "I will love you forever, Yandy Chirino."

In a heartfelt tribute to her late boyfriend Officer Yandy Chirino, girlfriend Chelsea Howell remembered the fallen Hollywood cop as someone with great humor, strength, and someone who put his life on the line every day for the betterment of the community. "Yandy died a hero and doing what he loved. He knew there was a risk putting on that uniform every night."

Monday's service was followed by a full honors presentation, including a riderless horse, a rifle volley, the playing of “Amazing Grace" on bagpipes, a last radio call, a flyover and the folding of an American flag, police officials said.

After the service, the procession headed to Hollywood to make brief stops at Memorial Regional Hospital, where Chirino died, and the Hollywood Police Department, and then to Miami Lakes for burial at Vista Memorial Gardens cemetery.

“It’s very difficult, even though we didn’t know him personally, but as a brother in law enforcement, we are all brothers,” said Lee Milstein, president of Blue Knights Florida Chapter 4.

Jovany Coronado speaks at the event honoring the Hollywood Police officer shot and killed in October.

“Let the family know there’s a family not just locally but across the country,” Sgt. John McFarland of the NYPD said.

McFarland is also part of the Brotherhood for the Fallen, an organization that helps families of officers who die in the line of duty.

“We all feel these deaths...even after we all leave and go home, there’s a support network,” McFarland said.

Chirino was shot during an altercation with 18-year-old Jason Banegas after responding to a call of a suspicious incident on Oct. 17.

Banegas is facing felony murder, armed burglary, battery on a law enforcement officer, carrying a concealed firearm violation, grand theft of a firearm, and resisting arrest with violence. He is being held without bond.

During the bond court hearing, a prosecutor said Banegas had been released from jail around 30 days ago and is currently on juvenile probation out of Miami-Dade on burglary, trespassing and possession of cocaine charges.

When Chirino responded to the neighborhood, Banegas "did knowingly, willfully and violently fight and resist" Chirino while Banegas was in possession of the firearm which he discharged, hitting Chirino - who died later at the hospital.

In total, seven Hollywood officers have died in the line of duty since the department was formed in 1925.

The 17-year-old sister of Banegas was arrested late last month in connection with the stolen gun allegedly used. She faces charges of grand theft of a firearm and possession of a firearm by a felon or delinquent.

Including Chirino, Del Rio and Shivers, seven Hollywood officers have died in the line of duty since the department was formed in 1925.