The Canadian government made clear Wednesday that Pope Francis’ apology to Indigenous peoples for abuses in the country’s church-run residential schools didn't go far enough, suggesting that reconciliation over the fraught history is still very much a work in progress.

The official government reaction came as Francis arrived in Quebec City for meetings with Prime Minister Justin Trudeau and Governor General Mary Simon at her Quebec residence, the hilltop Citadelle fortress, on the second leg of Francis' week-long visit to Canada.

The government's criticisms echo those of survivors and concern Francis' omission of any reference to the sexual abuse suffered by Indigenous children in the schools, as well as his refusal to name the Catholic Church as an institution bearing any responsibility.

Francis has said he is on a “penitential pilgrimage” to atone for the church’s role in the residential school system, in which generations of Indigenous children were forcibly removed from their homes and forced to attend church-run, government-funded boarding schools to assimilate them into Christian, Canadian society. The Canadian government has said physical and sexual abuse were rampant at the schools, with students beaten for speaking their native languages.

Pope Francis delivered an apology Monday for the "catastrophic" abuses committed against Canada’s Indigenous communities, many of whom were forced into Catholic residential schools where physical and sexual abuse was prevalent.

He asked forgiveness “for the wrongs done by so many Christians to Indigenous peoples” as well as “local Catholic institutions.”

But Francis also noted that the school system was “promoted by the governmental authorities at the time” as part of a policy of assimilation and enfranchisement, in which “local Catholic institutions had a part.”

Indigenous peoples have long demanded that the pope assume responsibility not just for abuses committed by individual Catholic priests and religious orders, but for the Catholic Church’s institutional support of the assimilation policy and the papacy’s 15th century religious justification for European colonial expansion to spread Christianity.

More than 150,000 Native children in Canada were taken from their homes from the 19th century until the 1970s and placed in the schools in an effort to isolate them from the influence of their families and culture.

Trudeau, a Catholic whose father, Pierre Trudeau, was prime minister while the last residential schools were in operation, insisted that the Catholic Church as an institution bore blame and needed to do more to atone.

Speaking before Francis, he noted that Canada’s Truth and Reconciliation Commission in 2015 had called for a papal apology to be delivered on Canadian soil, but that Francis’ visit “would not have been possible without the courage and perseverance” of survivors of First Nations, Inuit and Metis who traveled to the Vatican last spring to press their case for an apology. 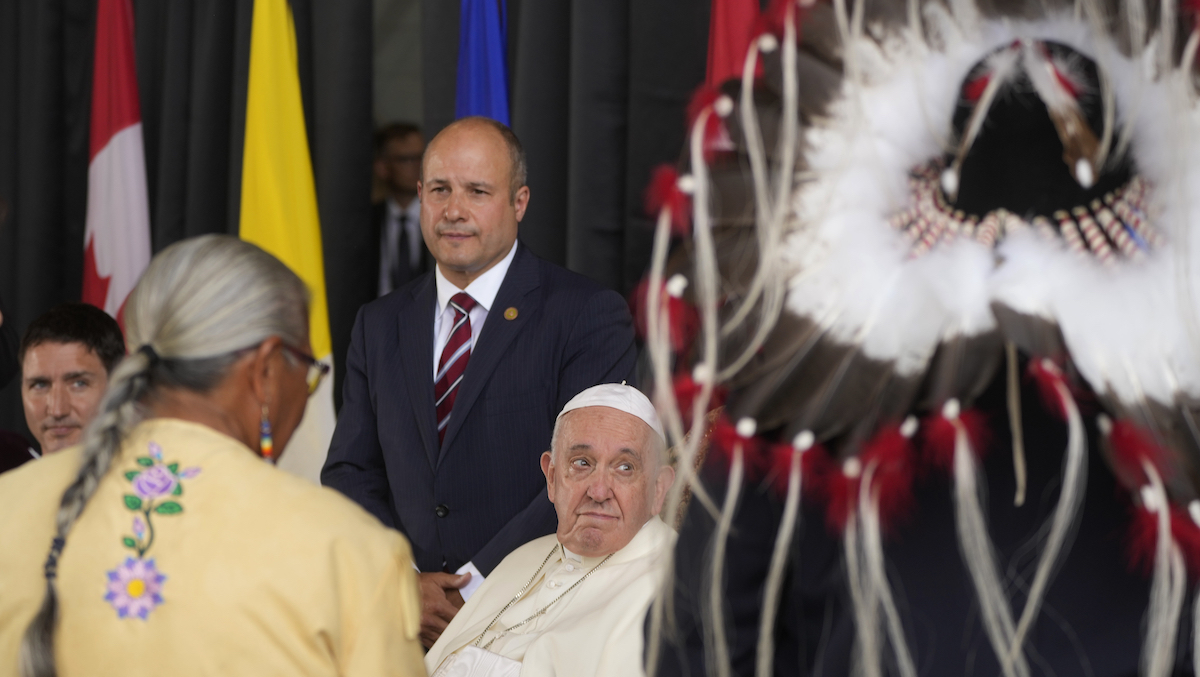 “Apologies for the role that the Roman Catholic Church, as an institution, played in the mistreatment on the spiritual, cultural, emotional, physical and sexual abuse that Indigenous children suffered in residential schools run by the church,” Trudeau said.

The Canadian government has apologized for its role in the school legacy. Former Prime Minister Stephen Harper issued a formal apology over the residential schools in Parliament in 2008, calling them a sad chapter in Canadian history and saying the policy of forced assimilation caused great harm.

As part of a settlement of a lawsuit involving the government, churches and the approximately 90,000 surviving students, Canada paid reparations that amounted to billions of dollars being transferred to Indigenous communities. The Catholic Church, for its part, has paid over $50 million and intends to add $30 million more over the next five years.

Trudeau implied that much more needed to be done by the church, and that while Francis’ visit had “an enormous impact” on survivors, it was but a first step.

Aside from the content of his speech, Trudeau’s remarks broke customary protocol for papal trips. According to diplomatic protocol, only Simon was supposed to address the pope in her capacity as the representative head of state. Simon, an Inuk who is the first Indigenous person to hold the largely ceremonial position governor general, did address Francis. CQ

But the Vatican said Trudeau’s office requested the prime minister be allowed to offer some introductory remarks, a request that arrived in the days before Francis left Rome but after the pope’s itinerary had been finalized and printed.

A senior Canadian government official said Trudeau typically delivers remarks during visits by foreign leaders and that it was important for him to address Canadians during Francis’ visit “particularly given the importance of the matter.” It was, however, added in at the last minute.

Pope Francis traveled to Canada on Sunday for a six-day visit to the country where he plans to apologize to Indigenous peoples.

Before Francis arrived in Quebec City, Crown-Indigenous Relations Minister Marc Miller said the “gaps” in Francis’ apology could not be ignored.

Echoing criticism from some school survivors, Miller noted that Francis didn’t mention sexual abuse in his list of abuses endured by Indigenous children in the schools. Francis on Monday listed instead physical, verbal, psychological and spiritual abuse. In addition, Miller noted that Francis spoke of “evil” committed by individual Christians “but not the Catholic Church as an institution.”

The Truth and Reconciliation Commission had called for a papal apology similar to the one Pope Benedict XVI delivered to Irish victims of sexual abuse in 2010, in which he blamed the “inadequate response of ecclesial authorities” in Ireland for failing to sanction predator priests. That letter, however, admitted no Vatican blame in the crisis.

Francis’ visit has stirred mixed emotions among survivors and their relatives, as well as Indigenous leaders and community members. Some have welcomed his apology as genuine and useful in helping them heal. Others have said it was merely the first step in a long process of reconciliation. Still others have said it didn’t go far enough in assuming responsibility for institutional wrongs dating back centuries.

Francis himself has acknowledged that the wounds will take time to heal and that his visit and apology were but first steps. On Wednesday he committed himself and the local Canadian church to “move forward on a fraternal and patient journey with all Canadians, in accordance with truth and justice, working for healing and reconciliation, and constantly inspired by hope.”

“It is our desire to renew the relationship between the Church and the indigenous peoples of Canada, a relationship marked both by a love that has borne outstanding fruit and, tragically, deep wounds that we are committed to understanding and healing,” he said.

But he didn’t list any specific actions the Holy See was prepared to take.

Trudeau, too, said the visit was a beginning and that reconciliation was the duty of everyone. “It’s our responsibility to see our differences not as an obstacle but as an occasion to learn, to better understand one another and to move to action.”

Associated Press religion coverage receives support through the AP’s collaboration with The Conversation US, with funding from Lilly Endowment Inc. The AP is solely responsible for this content.