Dawn Reinfeld moved to Colorado 30 years ago to attend college in the bucolic town of Boulder. Enchanted by the state's wide-open spaces, she stayed.

But, in the ensuing decades, dark events have clouded her view of her adopted home. The 1999 massacre at Columbine High School. The 2012 massacre at the Aurora movie theater. On Wednesday, Reinfeld was reeling from the latest mass shooting even closer to home, after authorities say a 21-year-old gunned down shoppers at a local grocery store.

“I could see at some point leaving because of all this,” said Reinfeld, a gun control activist. “It's an exhausting way to live.”

Colorado has long been defined by its jagged mountains and an outdoor lifestyle that lure transplants from around the country. But it's also been haunted by shootings that have helped define the nation's decades-long struggle with mass violence. The day after the latest massacre, many in the state were wrestling with that history — wondering why the place they live seems to have become a magnet for such attacks. Why here — again?

“People now say, ‘gee, what is it about Colorado?’” said Tom Mauser, whose son Daniel was killed at Columbine High School in 1999.

Mauser, now a gun control advocate, was fielding phone calls in the wake of the new attack — among them was a panicked call from a friend whose daughter was shopping in the supermarket and just escaped the shooting. Again, the violence felt so close.

“It just effects so many people. It's become pervasive,” he said.

Colorado isn't the state with the most mass shootings — it ranks eighth in the nation, in the same tier as far larger states like California and Florida, according to Jillian Peterson, a criminology professor at Hamline University in Minnesota.

In the wake of a pair of high-profile mass shootings in Atlanta and Boulder, Colorado, a previously planned Senate hearing on gun violence takes on new urgency today. Democrats who now control the House and Senate are hoping to take action, but know they may not have the numbers.

But it is indelibly associated with some of the most high-profile shootings. The massacre at Columbine High School is now viewed as the bloody beginning of a modern era of mass violence. The Aurora shooting brought that terror from schools to a movie theater.

And there are others with less national prominence. In 2006, a gunman killed a 16-year-old girl after storming a high school in the mountain town of Bailey. The next year, a gunman killed four people in two separate attacks on evangelical Christian churches in suburban Denver and Colorado Springs. Three people died during a 2015 attack on a Planned Parenthood clinic in Colorado Springs. In 2017, three people were killed at a Walmart by a shooter whose motives were never known. In 2019, 18-year-old Kendrick Castillo was killed fending off an armed attack by two classmates at a suburban Denver high school.

The search for answers leaves no easy explanations. Despite its Western image, Colorado has a fairly typical rate of gun ownership for the country, and its populated landscape has more shopping centers than shooting ranges. It's close to the middle of the pack in terms of its rate of all types of gun violence — 21st in the country, according to Centers for Disease Control and Prevention data.

Peterson, who has written about mass shootings as a viral phenomenon where one gunman is inspired by coverage of other attacks, says the Columbine attack may be one reason Colorado has suffered so much. Two student gunmen killed 13 and “created the script” that many other mass shooters seek to emulate. The attackers died in the massacre but landed on the cover of Time Magazine and were memorialized in movies and books.

Ten people are dead and a suspected gunman is in custody following a Monday afternoon shooting inside a Boulder, Colorado, supermarket. Eric Talley, the first Boulder police officer to respond to reports of the shooting, was among those killed.

“Columbine was the real turning point in this country, so it makes sense that, in Columbine's backyard, you'd see more of them,” Peterson said.

The attack was nearly a generation ago.

Like many young Coloradans, Esteban Luevano, 19, only learned about Columbine in school, as a tragedy that occurred before he was born. But its long shadow terrified him as a child who wondered whether gunmen could storm his school, too.

Then, when Luevano was 11, another gunman opened fire at a movie theater near his house in Aurora, east of Denver and on the opposite side of the metro area from Columbine's leafy suburbs. Twelve people were killed and 70 wounded. 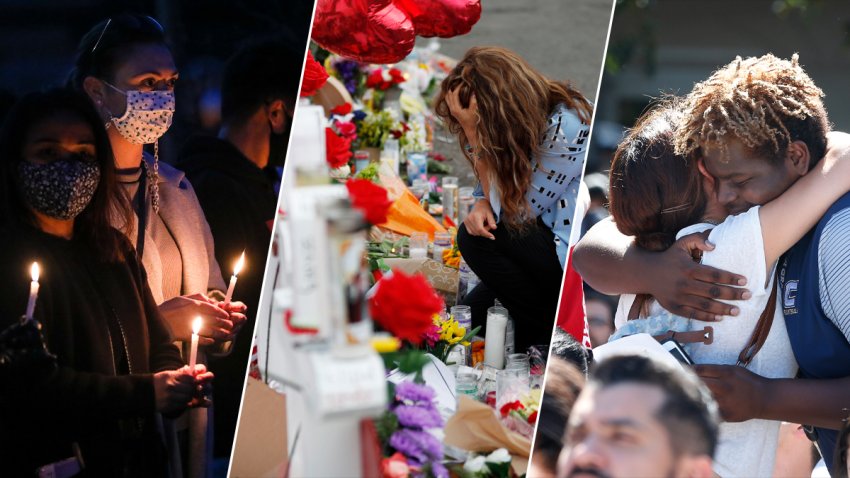 Deadly Assaults in Atlanta, Boulder: The Victims of US Mass Shootings in 2021 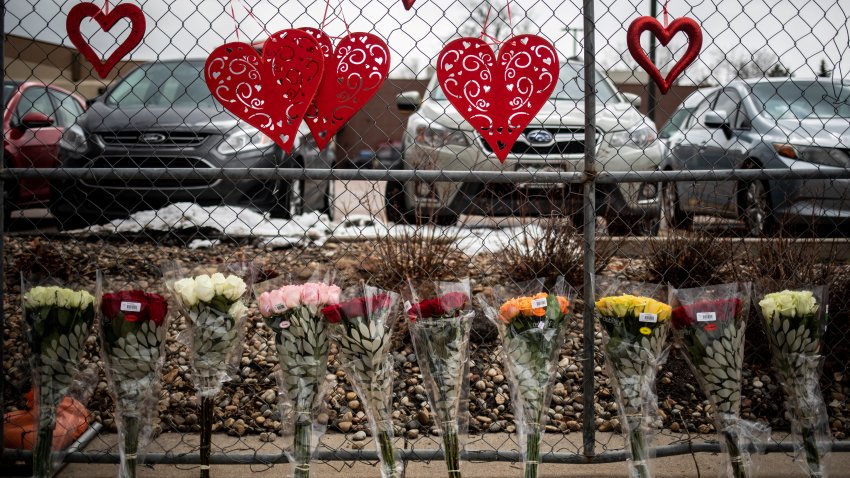 The theater has since been torn down and rebuilt. It sat empty on Tuesday, shuttered during the pandemic, as snow began to swirl and Luevano bundled up to head into a mall across the street. He was still reeling from the idea that the latest Colorado community to join the grim brotherhood was the tony, college town of Boulder.

“It's pretty fancy, so it kind of shocked me that someone would shoot out there,” Luevano said.

Colorado has taken some action to restrict access to guns.

After each of Colorado's biggest massacres, the local gun control movement has gained heartbroken new recruits. Survivors of Columbine and family of the victims there helped push a ballot measure that required background checks for guns purchased at gun shows. After the Aurora attack, the state's newly Democratic Legislature passed mandatory background checks for all purchases and a 15-round limit for magazines.

Vice President Kamala Harris spoke the day after a mass shooting killed 10 people at a Boulder, Colo., grocery store. The vice president took a moment to honor the victims, including several children and a police officer “who was performing his duties with great courage and heroism.”

Those measures led to the recall of two state senators, but the laws endured. After the 2018 Parkland shooting in Florida, the Colorado Legislature passed laws allowing for the confiscation of guns from people engaged in threatening behavior. There has been rebellion from some rural sheriffs, but no recalls now.

Three years ago, the city of Boulder went further and banned assault weapons. A court blocked the measure just 10 days before Monday's rampage.

Gun control activists say one place to observe the impact of mass shootings is in the state's politics. The Republican congressman who represented Aurora was replaced in 2018 by Democratic Rep. Jason Crow, a gun control proponent. In November, the Democratic governor who signed the post-Aurora gun control measures, John Hickenlooper, won a U.S. Senate seat from Colorado's last major statewide elected Republican.

Still, the appetite for gun rights supporters has not dissipated completely. Coloradans last year also elected Lauren Boebert, a Republican from a rural district who said she wanted to carry a firearm on the floor of the House of Representatives.

One of the victims was a police officer. Police responded to a shooting at a King Soopers grocery store in Boulder, Colo., on Monday. The suspect, a 21-year-old male, is in custody.

Democrat Tom Sullivan, whose son Alex was killed during the Aurora shooting, was elected to a previously-Republican state house district in 2018. On Monday afternoon, he was out with a friend and didn't hear about the latest attack until he came home.

When he did, he turned on the television to watch, something he described as a “pause” to take in all the pain and life stories of the victims.

“It's not that we're numb to this, it's that we have a lot of practice,” Sullivan said in an interview.

Sullivan argued that Colorado doesn't have an unusually high number of mass shootings. It's just that the relatively wealthy state's backdrop makes the attacks more sensational. “The ones that are happening here in Colorado are happening in a little more affluent areas,” Sullivan said. “It's happening in other places, too, we just can't get people to report on that.”

Many of the victims were Asian women, authorities said Tuesday.

Not all touched by the state's history of massacres have become gun control backers. Brian Rohrbough, whose son Daniel was killed at Columbine, said he gets frustrated every time political activists pick up the issue after massacres. Instead, the solution is moral education, he argues.

“We're reaping what we've sown because we're afraid, as a state, as a country, to call evil evil,” Rohrbough said.