About 2.5 million mail-in ballots have already been cast, with Democrats returning 1.2 million and Republicans about 758,000 as of Monday

Rain or shine, nothing seemed to stop South Florida voters from participating in the state's first day of early voting Monday.

At the county's elections department, voters waited in the pouring rain and darkness until the doors opened at 7 a.m. Across town, at the Lemon City Branch Library, voters put up their umbrellas to stay dry as they waited. 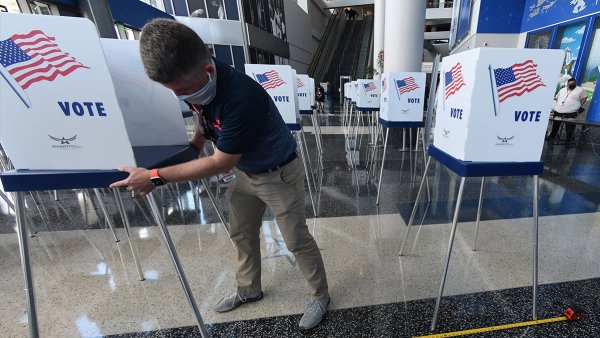 Voter Maggie Steber arrived as early as 5:45 a.m. She said she was glad to see her neighbors out with her.

"I am really happy to see so many people. We got soaking wet this morning but it doesn’t matter. It’s almost like a cleansing I thought," Steber said.

All 33 voting locations in Miami-Dade were up and running for a day elections officials already predicted would be record-setting.

"We started off quite busy as we expected for a presidential election, and we have over 8,000 people who already voted in the first couple of hours," Miami Dade Elections Supervisor Christina White said.

Early voting in South Florida begins on Monday. Here's all you need to know in case you're looking to beat the Election Day crowds.

A few miles north, in Broward, the scene was quite similar. Lines of voters snaked around around polling places from Lauderhill to Hollywood as 28,113 votes were cast according to unofficial numbers from the Supervisor of Elections office.

Under state law, counties can offer up to two weeks of early voting and many do, including Miami-Dade, Broward, Palm Beach and other population centers. Large counties offer multiple sites and all counties allow those who have received mail-in ballots to drop them off. The latest a county can start early voting is Saturday. The final day is Nov. 1.

With 29 electoral votes, Florida is crucial to both candidates but especially Trump, who moved his official residence to his Palm Beach estate Mar-a-Lago from New York last year. A Florida loss would make it nearly impossible for Trump to reach the 270 electoral votes needed to retain the White House. The state typically has close elections, most notably in 2000 when Republican George W. Bush defeated Al Gore by 537 votes after a recount.

About 2.5 million mail-in ballots have already been cast, with Democrats returning 1.2 million and Republicans about 758,000 as of Monday. Non-affiliated voters and third-party members make up the rest. The number of mail-in votes is approaching the 2.7 million cast in 2016 when Republicans had a 70,000-vote margin on returns. Trump defeated Hillary Clinton in the state by about 113,000 votes. No Republican has won the presidency without winning Florida since Calvin Coolidge in 1924.

Florida Republicans say they aren’t worried about the mail-in gap, believing any advantage Biden gets will be swamped by Trump supporters casting in-person ballots starting this week and on Election Day. They believe Democrats are “cannibalizing” their own votes — moving in-person voters to mail-in without increasing their overall support. They point to their increased voter registration, which narrowed the Democrats’ lead to 134,000, down 327,000 four years ago.

“Republicans are going to get their vote out," he said.

While Florida Republicans have historically outperformed Democrats in mail-in voting, Schale said Trump’s criticism of the practice has crippled his party's Florida mail-in effort — even though he has praised his adopted home state's system.

“Trump basically decided to take a match and just torch 20 years of Republican work down here,” he said.