Just getting vaccinated will almost surely save your life or spare you severe disease, doctors say

Florida is seeing some big numbers in this new wave of coronavirus -- including most cases, second most cases per capita behind Louisiana, and most hospitalizations per capita -- but it’s a Greek letter, Delta, that has experts very concerned.

On Monday, the University of Miami announced 90 percent of the current COVID patients at UHealth and Jackson Health systems hospitals are infected with the Delta variant. 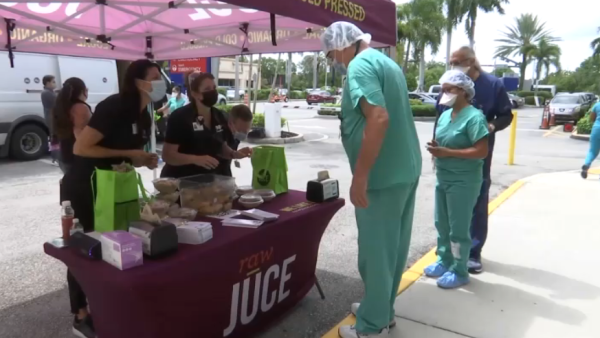 That is a 50 percent increase from two weeks ago and more than triple what it was two weeks before that.

"It’s really been skyrocketing over the last four weeks or so," said Dr. David Andrews, the UM medical school professor whose genetic sequencing lab has been randomly testing the patients.

Andrews said the Delta variant’s message is clear: "What it says is that it’s extremely transmissible, it’s a very contagious variant. That‘s the most striking feature. It has a transmission rate, it’s been reported and it’s accurate, that is starting to approach that of chicken pox."

And it's moving south.

Officials say Broward and Miami-Dade are leading the nation in COVID-19 hospitalizations,

Hospitals in Jacksonville and Orlando are already breaking pandemic records.

But, Andrews and other physicians stress, this time around you can almost eliminate the risk of serious illness, if you just get vaccinated.

"Those individuals who are vaccinated are extraordinarily protected," Andrews said, "well protected from serious disease, from hospitalization and certainly from dying from even the Delta variant."

As coronavirus cases surge with the spread of the delta variant, the White House COVID-19 data director announced Monday that the U.S. had finally hit a critical milestone in the fight against the pandemic: 70% of American adults have now received at least one dose of the vaccine.

Ninety percent of Miami-Dade’s hospitalized COVID patients did not get the vaccine and those who are vaccinated are not as seriously ill.

In addition to the concern the unvaccinated will get seriously ill or die, Andrews and Dr. Howard Kessler, of Physicians for Social Responsibility, cited a more long-term risk: if not enough people get the shots, the virus could mutate again and again into something even worse.

"When the vaccine is available and you don't get vaccinated, you are providing that virus with millions of more hosts in which that virus can mutate,' Kessler said.

And no one wants to go there.