Four people, including a defense team investigator, have been charged after a witness being pressured to recant brought hidden audio and video equipment to a meeting where her recantation was to be recorded by the defense.

During his more than two years in the Broward County jail, career criminal Kevin Peeples has sought to threaten, tamper with or cajole witnesses in his attempted felony murder case to recant, according to police and prosecutors.

Now a sealed arrest affidavit obtained by the NBC 6 Investigators lays out exactly how his latest efforts were exposed by a Broward sheriff’s gang detective, leading to the arrests of four people.

Among them: an investigator for a state-funded criminal defense office who allegedly helped “manufacture” key portions of a videotaped statement he obtained from a witness to the attempted murder.

That investigator for the Office of Criminal Conflict and Regional Counsel, Gentry Chambers, is described in the affidavit as allowing two men in his office coach the witness on how to recant her previous identification of the alleged shooter.

What they did not know was the witness was equipped by the Broward sheriff’s office with audio and video recording devices that captured them as they allegedly shaped her testimony to help Peeples, 31, go free.

Chambers, 43, was arrested last week and charged with witness tampering, along with Peeples and the two men who paid the witness $500 and brought her to Chambers’ office to record the statement.

One of those men, Gerald Pendergrass, 29, is the victim Peeples is accused of attempting to murder. 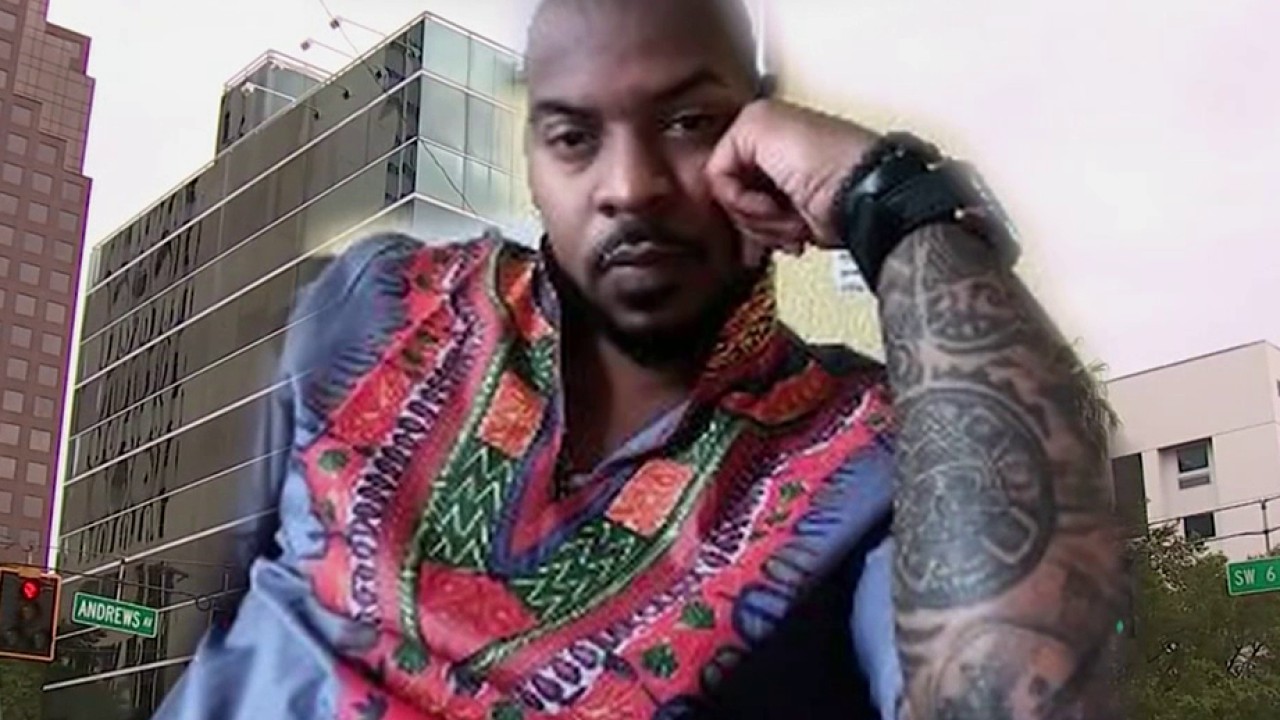 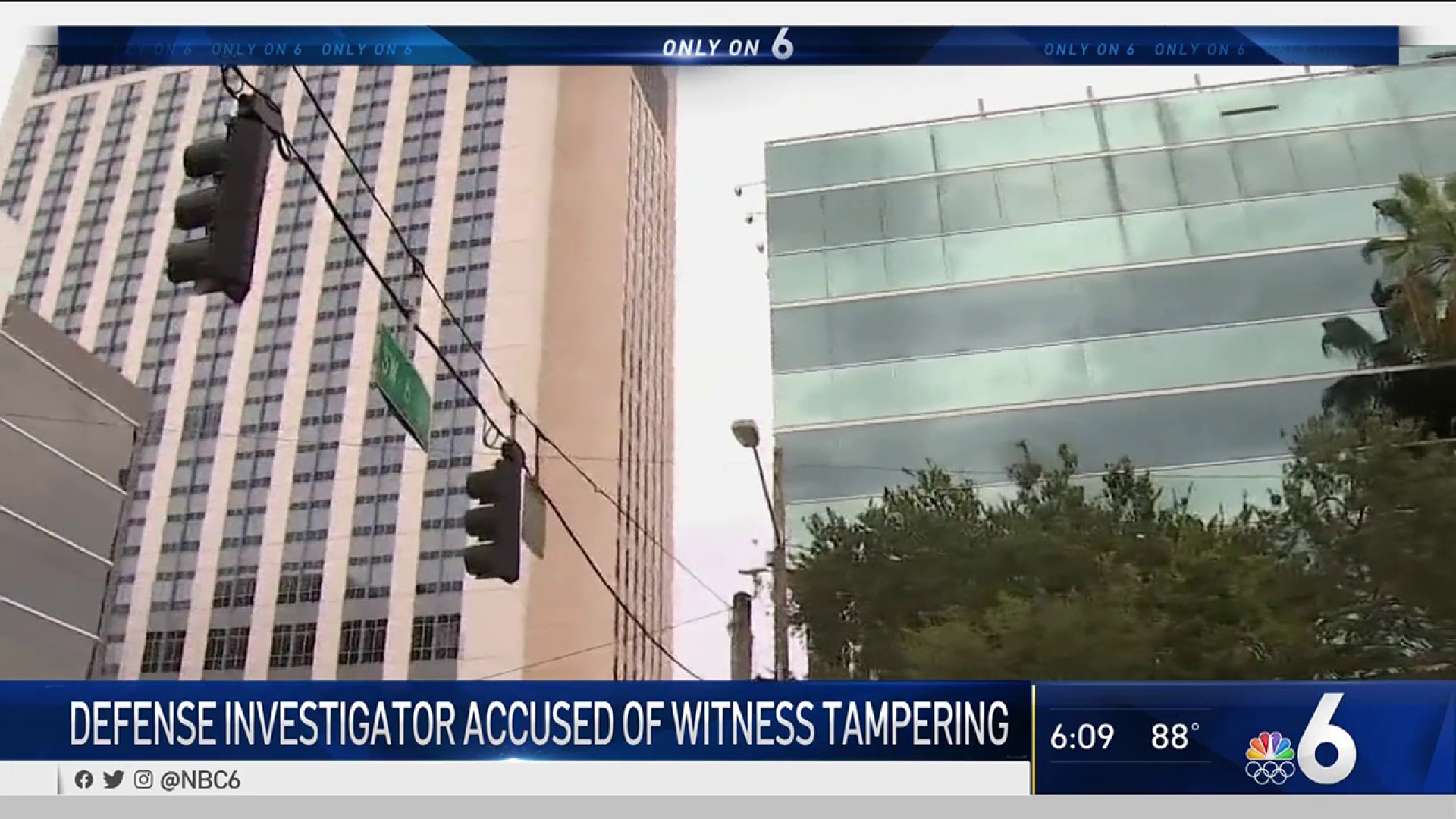 Peeples faces life in prison if convicted of shooting Pendergrass during a robbery outside a Fort Lauderdale 7-Eleven on April 1, 2019, after Pendergrass and his then-girlfriend gave Peeples a ride.

Pendergrass told police Peeples pulled a gun on him and demanded cash and jewelry, shooting him in the torso when Pendergrass resisted. The ex-girlfriend identified Peeples as the shooter.

But Pendergrass last July changed his story, writing in an affidavit that Peeples “did not shoot me and I refuse to prosecute so y’all need to release this … man.”

That left the state’s case resting heavily on the eyewitness.

On May 3, prosecutors allege, Pendergrass and another associate of Peeples, Jeremiah Jones, paid the witness $500 in exchange for her recanting her previous identification of Peeples as the shooter.

They joined her that day inside the office of the regional counsel, which is appointed by the court to represent indigent defendants who have a conflict with the public defender’s office.

Chambers has been an investigator in the Fort Lauderdale office for nearly nine years and is paid about $55,000 a year, according to the state. In a statement to NBC 6, his employer states he “committed no crime and remains a valuable and dedicated member of the office…We are optimistic the Office of the State Attorney will carefully review this matter and that the charge against Investigator Chambers will be dropped.”

Prosecutors last week agreed to Chambers being released on his own recognizance, while his three co-defendants are being held without bond and allowed to communicate only with their attorneys.

Chambers’ criminal defense attorney, Sam Halpern, said Chambers “did nothing to run afoul of that law” and he would be “surprised once the case gets a good, hard look by the state attorney’s office that they would pursue” a case against Chambers.

But the still-sealed 14-page affidavit, which was apparently posted online in error Tuesday by the Clerk of Court, lays out in great detail why law enforcement believes — and a judge found — there is probable cause to believe Chambers and the others committed witness tampering.

“I’m not telling you what to say, but to align it with (Pendergrass),” Chambers told the witness during the meeting, according to the affidavit prepared by Det. Kenneth Brookins.

“‘That night everything happened it was a lil’ murky,’” Chambers continued, allegedly coaching the witness on what she should say when his cellphone camera would later roll. “‘Whatever my boyfriend told me, that kind of sort of what I told the police. Everything happened too fast, but the last thing I want to do is put someone in jail who is not supposed to be there, because I said something I really didn’t, know.’”

“Chambers explained this plan in front of Jones and Pendergrass, who agreed with his directions,” the affidavit states. “Chambers explains to (the witness) if she freezes up in the video not to look away because he may be asked if anyone else was in the room and that would make the video ‘garbage.’”

“Chambers, Jones and Pendergrass directed (the witness) in what she was to say once the video recording device was turned on,” Brookins wrote in the affidavit. “None of the information that was to be used for the statement came from (the witness). It was all manufactured by Chambers, Pendergrass and Jones.”

The witness, who NBC 6 is not identifying, and her family last year were threatened with murder by another associate of Peeples, resulting in Peeples and that messenger being charged with witness tampering in the separate investigation last year.

This February, Brookins — who states he is assigned to the gang unit and has intimate knowledge of the Bloods gang with which Peeples is involved — was assigned to investigate this new alleged tampering attempt.

In a call from jail in February, Peeples is heard saying prosecutors “would have no other choice but to let me out” if the witness recanted. “The only thing holding me in jail is that they got her…. She has to make a new statement recanting,” according to the affidavit.

On February 18, Pendergrass and Peeples inadvertently were caught on the witness’ voicemail — speaking about fabricating testimony in exchange for cash — after she failed to pick up a phone call that appeared to be coming from Pendergrass, her ex-boyfriend.

A separate recording of the three-way call from the jail confirmed that when Peeples realized the voicemail had been recording, he yelled at Pendergrass “Delete that message! Damn! F***!,” according to the affidavit.

The witness recognized the voices and provided the call to law enforcement the same day, saying she was “terrified” to hear Peeples’ voice, the affidavit states.

By the next week the witness was working with police, using a covert phone line that recorded all calls and texts.

On April 27, she is told directly by Peeples from jail that he will pay $500 if she recants and another payment once he is set free, Brookins recounted.

On May 3, “equipped with multiple audio/video recording devices,” the witness, Jones and Pendergrass walked into Chambers’ offices a block from the courthouse as investigators monitored a live feed.

She asked for payment and was given $240 before entering, the remainder promised if she went through with the recantation.

Once inside with Chambers, the coaching from Jones and Pendergrass began, the affidavit states. Brookins notes Chambers had never spoken to the witness before this meeting, but nonetheless tells her the video he would take of her would “throw a monkey wrench into the state’s case.”

In his first attempt at a video statement, Chambers states “you reached out to me,” something Brookins says in the affidavit is “a fabricated statement” as the witness never made contact with him before the meeting.

Jones, 32, then steps in, telling the witness to say “you’re not in fear of your life. Nobody is threatening you. You don't even know Kevin Peeples.”

After that and more guidance from Chambers, she gives the recorded statement that Peeples attorney would submit three weeks later to the state as evidence of his innocence, along with her written statement that mimics what Jones told her almost verbatim: “I’m not in fear of my life. I’m not being threatened and I don’t know Kevin (Peeples) or never seen him a day in my life,” she wrote.

The statement is notarized by Chambers.

Once out of the office Brookins wrote, the witness gave her copy to Jones in exchange for the remaining $260 of the $500 payment.

In its statement to NBC 6, the regional counsel pointed out potential problems with law enforcement targeting a member of a defense team. “The prosecution of a defense investigator would have a chilling effect on the role of the defense counsel in the criminal justice system,” it said, adding. “Investigator Gentry Chambers did not tamper with a witness and we are greatly dismayed by his arrest. Dedicated investigators like Mr. Chambers who work for public defender offices and criminal defense firms are a vital part of the criminal justice system.  They are critical to the ability of accused persons, especially those who cannot afford private counsel, to receive quality legal representation.  A quality defense includes the ability to independently investigate the facts of a case and to speak with and interview witnesses.  It is the obligation of defense counsel to pursue all evidence that may tend to clear or exonerate the accused. In this case, it was wrong for Investigator Chambers to be arrested and for his actions to be likened to the actions of the others.”

only on 6Broward County