Survivors of the Surfside condo collapse survivors are worried a down-zoning plan will limit the compensation they get when the Champlain Towers South property is sold. But as of Thursday night's workshop, a compromise is on the table — where the site would be exempt from the plan and its value would be protected.

Susie Rodriguez, who survived the condo collapse, showed up to city hall to push back against the town’s down-zoning plan

Then came a possible compromise — and her night ended with an emotional embrace with commissioner Nelly Velasquez. 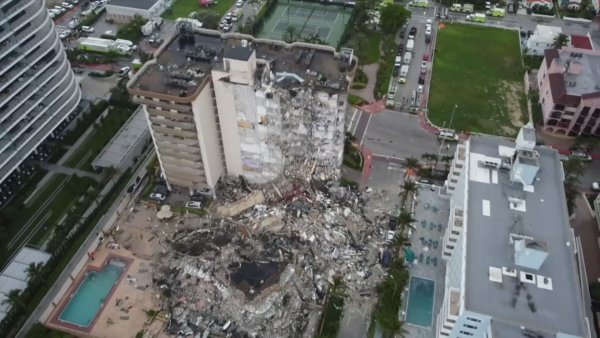 A Surfside zoning workshop could impact the value of the property and what compensation survivors will receive when the property sells. NBC 6's Steve Litz reports

“I’m here not just for myself. I just had a property loss. I loss 98 friends," Rodriguez said.

Surfside residents, town leaders and Champlain Towers South survivors ironed out details of the city’s down-zoning plan. The proposal would change the way buildings are measured and limit how big and tall they can be.

Champlain Towers South survivors and residents fear the plan could bring down the value of the land, which is set to be sold to a developer. That money will be the main revenue source to compensate victims who lost everything in the collapse.

Surfside leaders say the rezoning plan is a years-long effort to protect the town from overdevelopment.

After hours of debate, leaders told city attorneys to work out a compromise, where the Champlain Towers South site is not negatively affected by down-zoning.

“Work out an arrangement whereby the Champlain Towers is restored precisely what they had in terms," said Mayor Charles Burkett.

“We deserve to be able to get our building back. We don’t deserve to have a zoning policy that’s going to limit our density," Rodriguez said.

The proposed compromise is not official — the city's commission will schedule another workshop to continue discussions, a spokesperson said. Before any approval, there will need to be a first reading at a commission meeting, and then that plan would go before the planning and zoning board.

"If everything is approved there, there would need to be a second reading at a Commission meeting and the zoning would become effective, but we’re not there yet. The commission cannot vote during the workshops,” the spokesperson said.