Companies behind them maintain they can successfully remove carbon from the air to reduce pollution, then safely transport and store the carbon underground — or do both

Polly Glover realized her son had asthma when he was 9 months old. Now 26, he carries an inhaler in his pocket whenever he’s out and about in Prairieville, Louisiana, part of Ascension Parish.

The parish is part of the 85-mile (137-kilometer) span between New Orleans and Baton Rouge officially called the Mississippi River Chemical Corridor, more commonly known as Cancer Alley. The region's air quality is some of the worst in the United States, and in several places along the corridor, cancer risks are much higher than levels considered acceptable by the U.S. Environmental Protection Agency.

Glover says the air is “terrible” where she lives, but there’s also great biodiversity — osprey, eagles, migratory birds, deer, rabbits, fish and alligators — among the region's lakes, rivers and wetlands. The environmental advocate has been working for 30 years to preserve the place she’s loved since childhood.

That’s why she is wary of anything that might make air quality worse or threaten wildlife — and her biggest fear now is that a $4.5 billion plant designed to capture climate-changing carbon and make clean-burning hydrogen fuel will actually do more harm to the Lake Maurepas basin.

The blue hydrogen energy plant is slated to be built and operated by Air Products and Chemicals, a multinational petrochemical company. The company says the plant will capture airborne carbon emissions created during production and put them safely underground — a process called carbon capture and storage.

“Sometimes I think people think you’re kind of bubbling this in at the bottom of the lake,” said Simon Moore, vice president of investor relations, corporate relations and sustainability at Air Products. “You know, this is a mile below the Earth’s surface, where the geological formation of the rock has this porous space, which simply absorbs the CO2.”

Still, Glover is worried. “I’m not a scientist. I’m a mom who cares,” she said. “We have got to be better stewards of the environment and while reducing carbon emissions is necessary, injecting them into the basin is not the answer.” 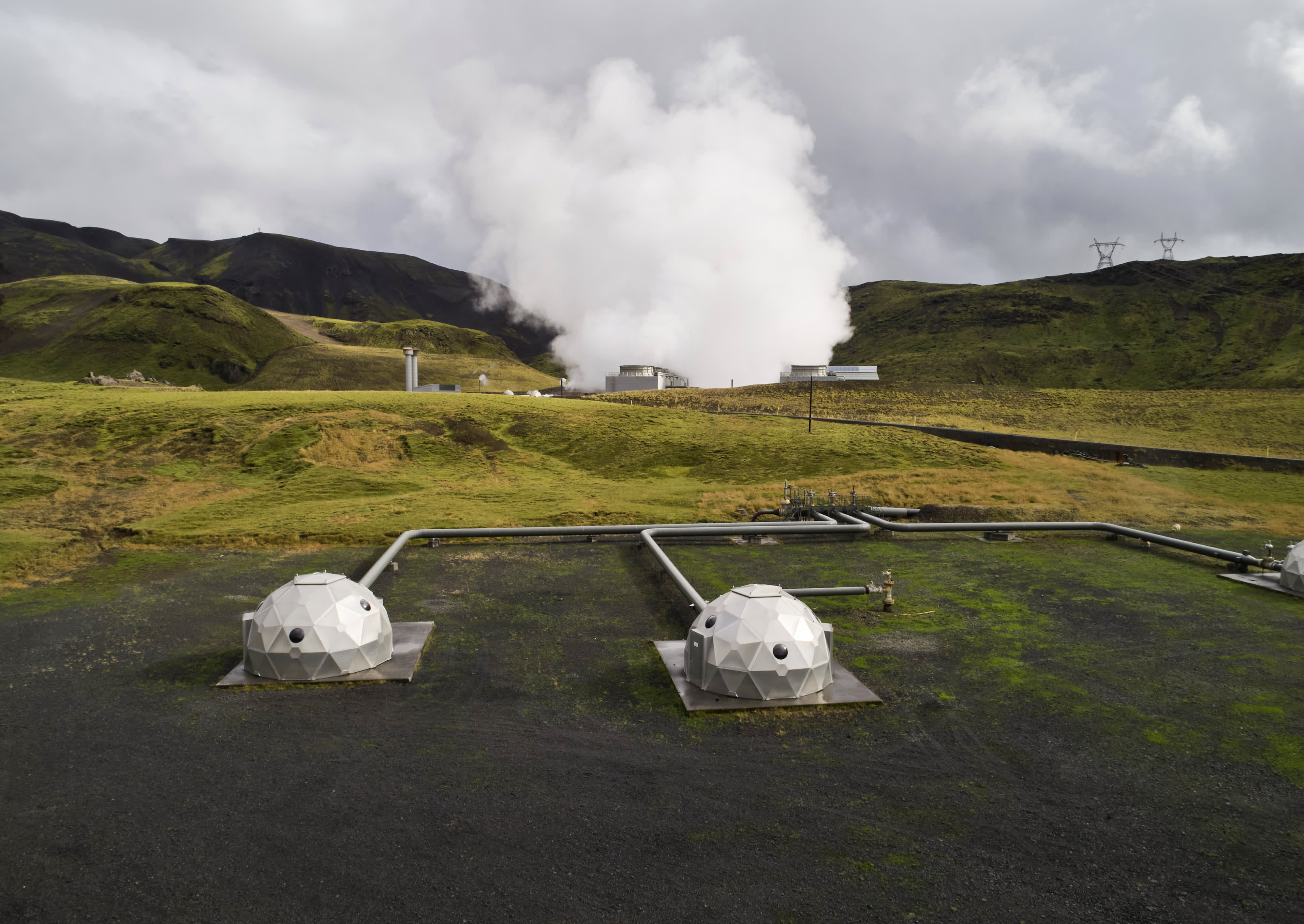 There are several other carbon capture and storage projects proposed or in the works throughout the U.S., including in Louisiana, Texas, Minnesota, Michigan, Iowa and California. Companies behind them maintain they can successfully remove carbon from the air to reduce pollution, then safely transport and store the carbon underground — or do both.

In some cases, oil and gas companies are banking on this new technology to either help build new profit centers, such as plants that make hydrogen, or extend the lifespan of their fossil fuel facilities.

Carbon capture and storage projects are gaining traction since Congress approved $3.5 billion for them last year. The Global CCS Institute, a think tank seeking to advance these projects globally, called it the “single largest appropriation of money for CCS in the history of the technology.”

Opponents of carbon capture and storage maintain the technology is unproven and has been less effective than alternatives such as solar and wind at decarbonizing the energy sector.

“Carbon capture is neither workable nor feasible,” said Basav Sen, climate justice policy director for the Institute for Policy Studies, a progressive think tank based in Washington, D.C. “It’s merely an excuse for the fossil fuel industry to keep operating the way it does.”

Which path will the world take? While some warming is guaranteed, there are still changes that can be made to decrease world carbon emissions and slow the impact of climate change. NBCLX climate storyteller Chase Cain breaks down what we should do next.

A study in late 2020 by researchers from the University of California, San Diego, found over 80% of 39 projects that have sought to commercialize carbon capture and storage ended in failure. The study cited a lack of technological readiness as a top factor.

But even if the technology was deployed successfully, several critics say the projects would pose threats to the public health of communities long plagued by air and water pollution.

First, they said any project that prolongs the lifespan of an existing industrial facility presents additional environmental harm by extending the amount of time it pollutes a community, which the IPCC report confirms.

Second, they noted that since carbon capture would require more energy to power the equipment, it would result in more air pollution because the technology can only catch a portion of the carbon emitted by a facility.

Howard Herzog, a senior research engineer at the Massachusetts Institute of Technology and pioneer of carbon capture and storage technology, disputed this in an interview with the Associated Press. But he acknowledged there is a risk in transporting and storing carbon.

In 2020, a pipeline carrying compressed carbon dioxide ruptured in the town of Satartia, Mississippi, which caused over 40 people to get hospital treatment and more than 300 to evacuate. The incident is cited by experts, advocates and residents who live near proposed carbon capture and storage projects to illustrate the potential dangers of transporting carbon long distances.

"Fossil fuels make us all vulnerable...to these geopolitical crises and shocks," says Selwin Hart, the Special Adviser to the U.N. Secretary-General focusing on climate. With the Russian invasion of Ukraine causing a stir in the energy market, it's time to transition more rapidly into renewable energy, Hart says. He talked more about the world's energy future and the U.N. IPCC report on climate change, which warns of worsening natural disasters caused by emissions.

Injecting carbon underground for storage could end up contaminating aquifers, according to Nikki Reisch, director of the climate and energy program for the Center for International Environmental Law.

Over 500 environmental organizations, including the law center, signed an open letter published in the Washington Post in July 2021, calling carbon capture and storage a “false solution.”

In response, the Carbon Capture Coalition, which advocates the technology, released its own letter in August with over 100 signatories. They pressed Congress to include investment in carbon capture and storage in any upcoming legislation.

“The potential for a completely decarbonized, electrified world is a reality,” Fry said. “But we’re going to need to transition to get there. And it’s going to require carbon capture to address those emissions.”

At the point of capture, Herzog said, the technology poses a “very low” threat to public health. “There's always a chance of some mishaps,” he added, “but on the overall scale of chemical plants, (the technology) is fairly benign.”

In California's Central Valley agricultural region, Chevron, Microsoft and Schlumberger New Energy are collaborating to build a facility in the town of Mendota that will create energy by converting agricultural waste into carbon monoxide and hydrogen gas, then mixing it with oxygen to generate electricity with the promise of capturing 99% of the carbon from the process.

Chevron said it plans to inject the carbon “underground into nearby deep geologic formations."

That's concerning for Nayamin Martinez, who lives in the valley and is the director of the Central California Environmental Justice Network. “That worries us a lot,” she said. “What does that mean in terms of risk for contamination of drinking water?”

Creighton Welch, a spokesperson for Chevron, said the process they plan to use is safe. “CO2 capture, injection, and storage are not new technologies and have been conducted safely for decades,” Welch said.

Back in Louisiana, Glover and other residents also fear carbon capture technology will affect the water. The carbon dioxide captured at the Air Products and Chemicals facility will be stored in sites such as under Lake Maurepas, an important wetland.

Kim Coates, who lives on the lake's northeast side, said it's a buffer between the Gulf of Mexico and residents. But she said she's witnessed generations of destruction to that ecosystem through industrial development and, more recently, hurricanes and tropical storms.

Now Coates fears more of the same if carbon is stored under the lake. “We’ve seen the destruction over time with no one looking forward to what was going to happen in the future,” she said.