Amid a dramatic rise in migrant children and families arriving at the U.S.-Mexico border to seek asylum, many are kept at outdoor intake sites and overcrowded detention facilities well past a 72-hour court-imposed limit

Elmer Maldonado spent a week in immigration custody with his 1-year-old son after crossing the Rio Grande through Texas to request asylum. One night, the Honduran father and son slept on the dirt under a bridge shivering from the cold temperatures at an intake site where large groups of migrants turn themselves in to Border Patrol officers.

His experience illustrates a cycle that is repeating itself thousands of times a week amid a dramatic rise in migrant children and families at the U.S.-Mexico border: They arrive in the middle of the night by the dozens and are kept at outdoor intake sites, then taken to overcrowded detention facilities well past the 72-hour court-imposed limit. From there, the families are either released into the U.S. or expelled to Mexico, the lucky ones dropped off at a COVID-19 testing site with documents. Children traveling without their parents go to federal shelters that are also quickly filling up.

The process is largely out of the public eye. The Associated Press has not been allowed in any of the Border Patrol facilities. Journalists are often limited by authorities even when going the banks of the Rio Grande to witness the process and talk to immigrants.

On a recent afternoon, Maldonado, 40, of Olancho, Honduras, lay on the bottom couch of a bunk bed in a Harlingen, Texas, shelter where migrants stay before they take buses or flights to other U.S. destinations. His son woke up crying and coughing, and he held him against his chest rocking him back to sleep.

“He caught a cold since that night we were out,” he said. “We were shivering. For a moment I thought my body was not going to heat up.”

Once released, the father-son duo was able to take a shower and change into a new set of clothes. The shelter donated some diapers for his son. Once the boy got up, he grabbed a container with chicken nuggets that he tried and quickly tossed aside, preferring instead a small juice box. 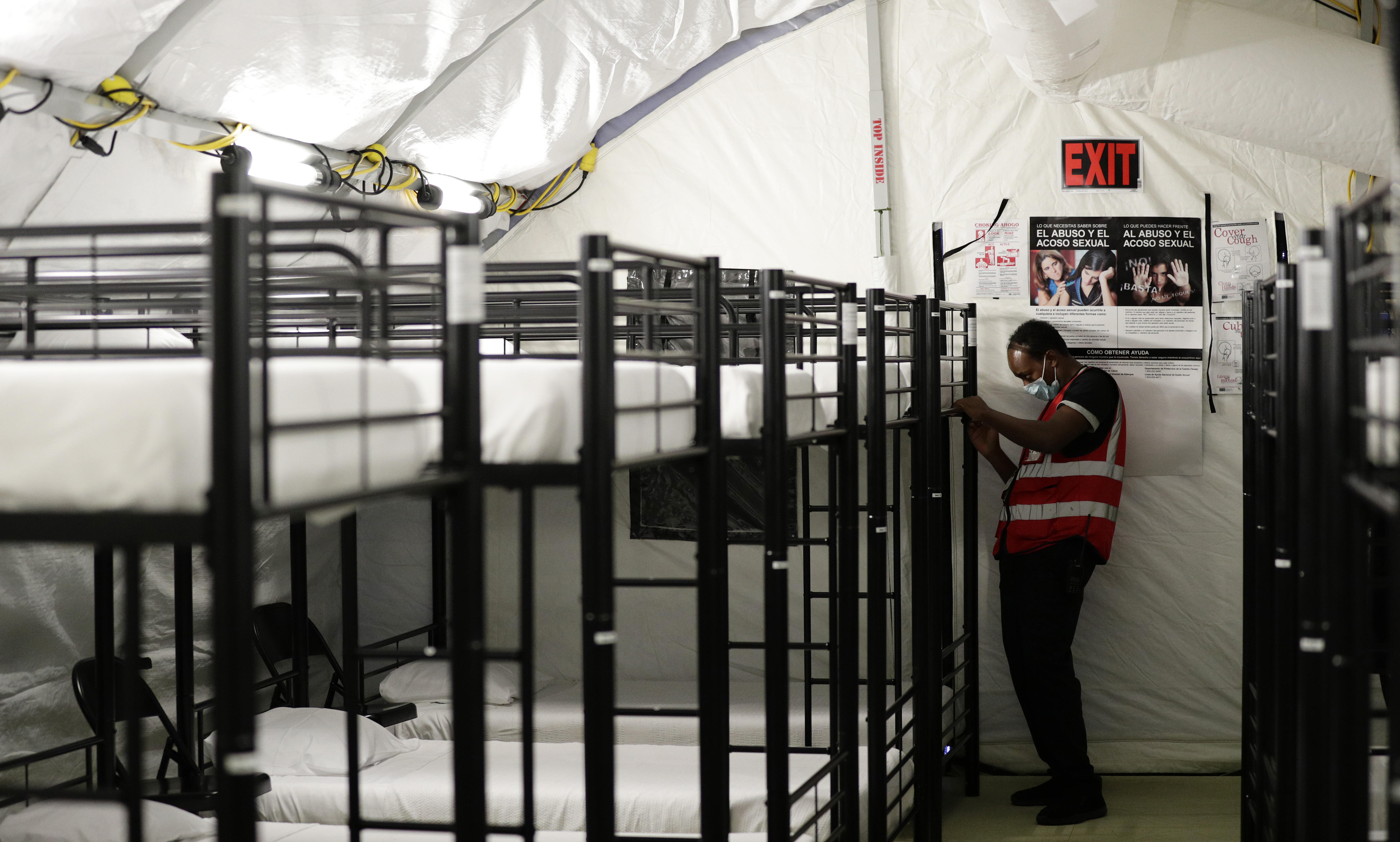 The Biden administration says that it's working to address the increase in migrants coming to the border. On Wednesday, President Joe Biden tapped Vice President Kamala Harris to lead the White House efforts at the U.S. southern border and work with Central American nations to address root causes of the migration. The government also issued a statement saying it will provide a daily tally of child migrants in custody.

The government said there were nearly 5,000 children in Border Patrol custody as of Tuesday and an additional 11,551 at shelters from the Department of Health and Human Services.

Earlier this week, three groups of migrants with young children could be spotted walking dirt paths in the brush north of the river in a short helicopter ride with Texas state troopers over the Rio Grande Valley. Boys jumped up and down and waved seemingly excited to see the helicopters hovering.

“When he saw the helicopter he said ‘papa, papa, papa,'" Maldonado recalled his boy saying. "He gets happy when he sees exciting new things. Sometimes he hears loud noises and it scares him, he’s still little and doesn’t understand much.”

Victor Escalon, regional director of the Texas Department of Public Safety, says he worried the more people are smuggled across the Rio Grande, the more opportunities for criminal organizations to flourish in the area.

“As a parent, as a human being, you want to make sure (migrant children) are cared for. They are kids. They don’t know any different,” he said. “But the more people you bring across, the individuals who are in charge of coordinating the criminal element, the smuggling of narcotics they are going to look for opportunities.”

Escalon says the busiest Texas corridor for migrants right now goes from La Joya on the east to Roma on the west, where Associated Press journalists observed apparent smugglers taking people across the river in inflatable rafts early Wednesday. Most of the migrants were women carrying babies and toddlers asleep in their arms or on their backs. Officials in other sectors are seeing increasing numbers stretching their capacity as well.

Edith Espinal, an undocumented immigrant who had to live in a church for the last three years to avoid deportation, has been cleared to leave and live with her family.

One of the migrants who recently arrived was Magdalena Banegas, of Yoro, Honduras. She was released after only a day in custody and received a small package from Border Patrol officers before she was dropped off at a coronavirus-testing facility in McAllen. One page had her name, photo and fingerprint, attesting she had been apprehended Sunday, and another one said she had received an “order of release on supervision” but no date to present herself in court.

Banegas, 23, was confused after seeing other migrant families traveling from the border to other U.S. cities had a date. She flew from McAllen to Houston with her toddler tapping and looking out the airplane window. She then caught a connection to New York, where her aunt lives.

She was not sure what would come next.

“I don’t know anything about where I need to go or what to do now,” Banegas said.