Many in Louisville, Kentucky, and other U.S. cities have turned to the streets to call for reforms to combat racist policing

Some of them raised their fists and called out “Black lives matter!” Others tended to the letters, flowers and signs grouped together in a square in downtown Louisville. All of them said her name: Breonna Taylor.

People dismayed that the officers who shot the Black woman in her apartment during a drug raid last March wouldn’t be charged with her death vowed to persist in their fight for justice. The big question for a town torn apart by Taylor’s death and the larger issue of racism in America was how to move forward.

Many turned to the streets — as they did in several U.S. cities — to call for reforms to combat racist policing.

“We’ve got to take it lying down that the law won’t protect us, that they can get away with killing us,” said Lavel White, a regular protester in downtown Louisville who is Black. He was drawn to a march Thursday night because he was devastated by a grand jury’s decision a day earlier not to charge the officers. “If we can’t get justice for Breonna Taylor, can we get justice for anybody?”

He was angry that police in riot gear were out in force when protesters had been peaceful as they streamed through the streets of downtown Louisville past a nighttime curfew.

Demonstrators also gathered in places like Philadelphia and New York, a day after violence marred some protests, including a shooting that wounded two Louisville officers.

In Los Angeles, an SUV drove through a demonstration late Thursday, hitting one protester and sending them to the hospital with minor injuries, NBC Los Angeles reports. The driver was detained and released. An investigation into the incident is ongoing.

In Portland, Oregon — a city that has seen many protests since the death of George Floyd in Minneapolis — a fire was set at a police union building. 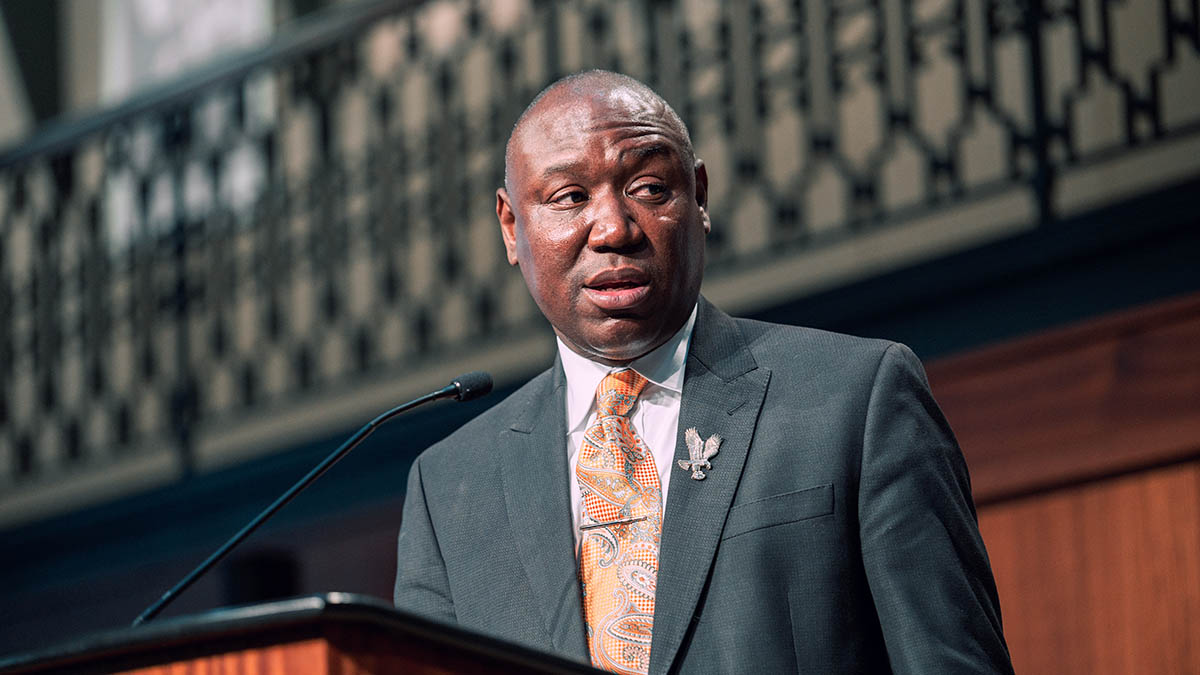 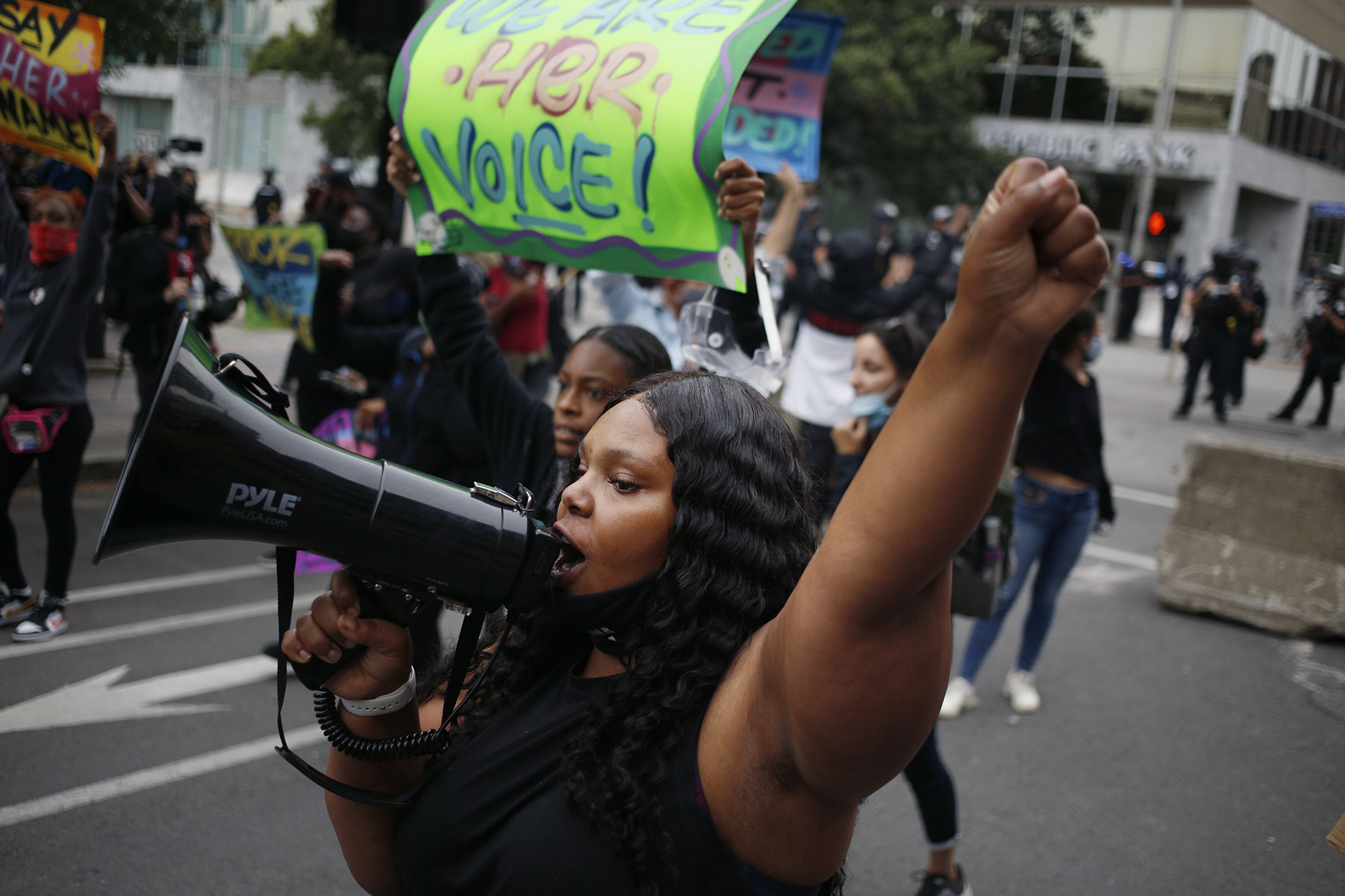 Taylor, a Black woman who was an emergency medical worker, was shot multiple times by white officers after Taylor’s boyfriend fired at them, authorities said. He said he didn’t know who was coming in and opened fire in self-defense, wounding one officer. Police entered on a warrant connected to a suspect who did not live there, and no drugs were found inside.

State Attorney General Daniel Cameron said Wednesday that the investigation showed officers acted in self-defense. One officer who has already been fired was charged with firing into a neighboring apartment.

The FBI is still investigating whether Taylor’s civil rights were violated. But the burden of proof for such cases is very high, with prosecutors having to prove officers knew they were acting illegally and made a willful decision to cause someone’s death.

While there was despair after the decision in Taylor's case, others saw reasons to hope.

A Kentucky grand jury has decided not to indict any of the police officers involved in the fatal shooting of Breonna Taylor with homicide or manslaughter, but that doesn't mean there can't be additional charges in the future to hold the officers responsible for her death. Attorney Michael Starr Hopkins explains that federal charges could still be possible under a Biden Administration.

Reginique Jones said she’ll keep pressing for increased police accountability and for a statewide ban on “no knock” warrants — the kind issued in the Taylor case, though the state attorney general said the investigation showed police announced themselves before busting into her apartment.

“I believe that we are going to get past this,” Jones said as she returned Thursday to the park in downtown Louisville that has been at the center of the protests. “We can still get some justice.”

The case has exposed the divide in the U.S. over bringing justice for Black Americans killed by authorities and the laws that allow officers to be charged, which regularly favor police.

Since Taylor’s killing, Louisville has taken some steps to address protesters’ concerns. In addition to the officer who was eventually charged being fired, three others were put on desk duty. Officials have banned no-knock warrants and hired a Black woman as the permanent police chief — a first for the city.

Louisville also agreed to more police reforms as it settled a lawsuit that included $12 million for Taylor’s family. But many have expressed frustration that more has not been done.

And so they took to the streets.

At least 24 people were arrested as of 1 a.m. Friday, police said, on charges including unlawful assembly, failure to disperse and riot in the first degree. Authorities alleged the protesters broke windows at a restaurant, damaged city buses, tried to set a fire and threw a flare into the street.

Earlier, it got heated between some protesters and a group of 12 to 15 armed white people wearing military-style uniforms, but it didn’t turn physical.

One of the police officers involved in the shooting death of Breonna Taylor in her Louisville home in March was charged Wednesday with first-degree wanton endangerment.

The curfew will last through the weekend, and Gov. Andy Beshear called up the National Guard for “limited missions.”

Peaceful protests a night earlier gave way to some destruction and violence. Two officers were shot and were expected to recover.

Larynzo D. Johnson, 26, was charged and he's scheduled to be in court Friday. Court records did not list a lawyer for him.

In the Louisville square where protesters often gather, Rose Henderson has been looking after the flowers, signs and letters placed at a memorial for Taylor and hopes officials won’t try to remove them.

“We’re going to stay out here and hold this place,” Henderson said.